Robert Eggers’ debut feature The Witch can be credited with a lot of things. It kickstarted the career of a new and exciting filmmaker, and it started a thousand arguments about what constitutes “elevated horror”, if such a thing even exists. It also – inarguably! – brought folk horror back into the mainstream.

Until then, the subgenre had been lying more or less fallow. Since the unholy trinity of Witchfinder General, The Blood on Satan’s Claw, and The Wicker Man set out the template in the late 60s and early 70s, there hadn’t been many other movies that mined similar veins of dark folklore – Chris Smith’s Black Death and Ben Wheatley’s Kill List are probably the only ones most people could name, while enthusiasts might add in solid but less heralded indies like Jug Face and Mr Jones. With The Witch, Eggers reignited popular interest in the subgenre, opening doors for other filmmakers as well as inspiring audiences to seek out more back-to-nature thrills.

Before we go any further, it’s probably worth setting out a working definition of folk horror. What sets a folk horror movie apart from any other occult or supernatural horror movie? The main point of difference is the importance of place: specifically, in folk horror there is inevitably something magical in the land where the story is set, some kind of power that can be drawn on and used for good or evil. There’s usually an opposition between the natural and cultivated worlds in these movies, a cultural clash that manifests as witches and witchfinders, pagans and church folk, apple farming islanders and policemen from the mainland.

In The Witch, a family of particularly devout Puritans is banished from a settlement, forced to move further out into a wilder part of the country inhabited by witches. Their attempts to oppose order onto their new home are doomed to fail, because they neither understand nor respect the magic that existed before they got there. (And because no teenage girl can resist the lure of independence, power, and a taste of butter.) Eggers’ film was a massive critical and commercial success for any number of reasons: because it’s terrifying; because it’s beautifully shot and has incredible performances; but also, because it tapped into something that was happening, culturally and politically, at the time.

Remember 2015? Donald Trump had announced his intentions to run for President of the United States. More than a dozen people were arrested in a huge corruption scandal within FIFA. Bill Cosby’s sexual offences came to light. There was a terrorist attack in Paris. The list goes on, but you get the idea. Everything was in upheaval, the dark sides of trusted individuals and organisations were coming to light, and fervent nationalism was in its ascendancy. Little wonder, then, that a movie about ambiguous forces of darkness captured audiences’ imaginations.

The folk horror floodgates duly opened. In 2017, Lukas Feigelfeld’s German horror Hagazussa saw an orphaned goatherd ostracised by superstitious locals in a 15th century Alpine village; Rainer Sarnet’s November has an Estonian town terrorised by both demons and the Black Death in corporeal form; and David Bruckner’s The Ritual set grief-stricken friends off on an ill-advised hiking holiday to rural Sweden, where something terrifying lurks in the woods. The horrors are all location-specific – they’re manifestations of ancient magicks that won’t be tamed, no matter what year the story takes place in. Through metaphor and folklore, these filmmakers confronted audiences with versions of their own dilemmas, and warned, in time-honoured fashion, about the dangers of wandering out into the wilderness by yourself, or of making a deal with the devil.

Another reason why the themes of folk horror chime with twenty-first century audiences is that we’re all becoming increasingly and uncomfortably aware of how man-made climate change is accelerating. Gareth Evans’s hyperviolent Apostle prods right at that anxiety, as its cult members don’t just offer up sacrifices of human blood to their island, but are shown to have enslaved their deity themselves: their Goddess is caged inside tree roots, helplessly guaranteeing the fertility of the cultists responsible for draining the island’s resources in the first place.

Conversely, Ari Aster’s sun-drenched nightmare Midsommar seems to promise an idyllic escape from the pressures of modern life, but its cult, too, has a bloodthirsty side. Folk horror suggests, over and over again, that any nostalgia for a gentler past is misguided. The past was never kind, in any of these movies, and even if it had been, you can’t go back anyway. Now, you just have to pay the price, and more often than not that means human sacrifice.

(It’s kind of a shame the remake of The Wicker Man with Nicolas Cage was so long ago, and so bad – a smarter script could certainly weave the pressing climate emergency into Summerisle’s apple-based mythology.) 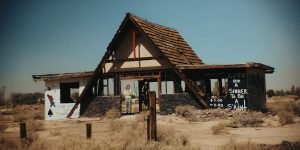 Where do we go?

So where next for folk horror? The trend doesn’t show any sign of slowing down. Powell Robinson and Patrick Robert Young’s Threshold suggests one way forward: it’s a road movie, in which a brother and sister travel cross-country in an attempt to break a curse. All of America feels implicated as their adventure takes them from one weird encounter into another – is the whole place unholy ground? Maybe everywhere is hexed.

Another possibility is that the COVID-19 crisis could inspire a spate of plague-based folk horrors. The devastation wrought by the Black Death has already provided tons of material, as a deadly, incomprehensible and seemingly inescapable force drives people to all kinds of bizarre practices to try to survive it. It doesn’t seem like too much of a stretch to suggest that the novel coronavirus, which has turned us all into curtain-twitchers who ritualistically douse ourselves with strong-smelling tinctures and rant about the sins of our neighbours, might offer similar inspiration.

Whatever the next wave turns out to be, in an age of fake news, conspiracy theories, and enforced isolate, folk horror is probably the genre best suited to addressing our collective anxieties. Anyone else kind of want to get a pet goat?