Nihilism and horror go together like the twin nightmarish confections they truly are. It’s a bitter candy only for the bravest of gourmet tastes. But what if one goes even further, adding a major ingredient so terrifying and explosive that you might as well be mixing hillbilly meth and nitroglycerin? What kind of diabolical mad person or persons would even dare to do such a thing?

Well, Douglas Grossman and Leo Evans, for starters, when the former directed the screenplay that the two wrote for 1987’s Hell High.

These intrepid souls took the slasher film subgenre, which even by the late 1980s, had its hoary cliches of high school/college victims, including the jock, the vixen open for anything with a pulse and a working luscious apparatus, the chubby jokester, the bad boy that is only marginally less clean cut looking compared to his preppy oppressors, the wholesome with repressed hormones final girl or guy, etc. The innate darkness of the concept of a story revolving around young adults and a serial killer would become sapped and weakened thanks to the one-two punch of glut and tonal shifts opting more for video-store-rental thrills and less emotional cause and effects of fatal crime. Hell High doesn’t necessarily add sharp teeth to the genre but it brings in the cynicism streaked with big oily smears of fatalism to set it apart from its cheekier brethren.

For starters, Hell High is missing arguably the biggest and certainly most discussed character slasher trope, which is “the final girl.” In fact, in a clever and nasty bit of bait and switch, the villain (s) of the film are the teens. Okay, “teens,” but this particular crew, especially the sole survivor, feel like the grimmest result of young adults coming-of-age in the Ronald Reagan/George Bush era of America where the human heart is replaced with corporate greed, nuclear fear, ketchup as nutrition, and ultraviolence cloaked in a blood-soaked American flag. To semi-invoke The Replacements, the bastards of the young would be a welcome respite compared to these hollow-hearted children of Gordon Gecko. 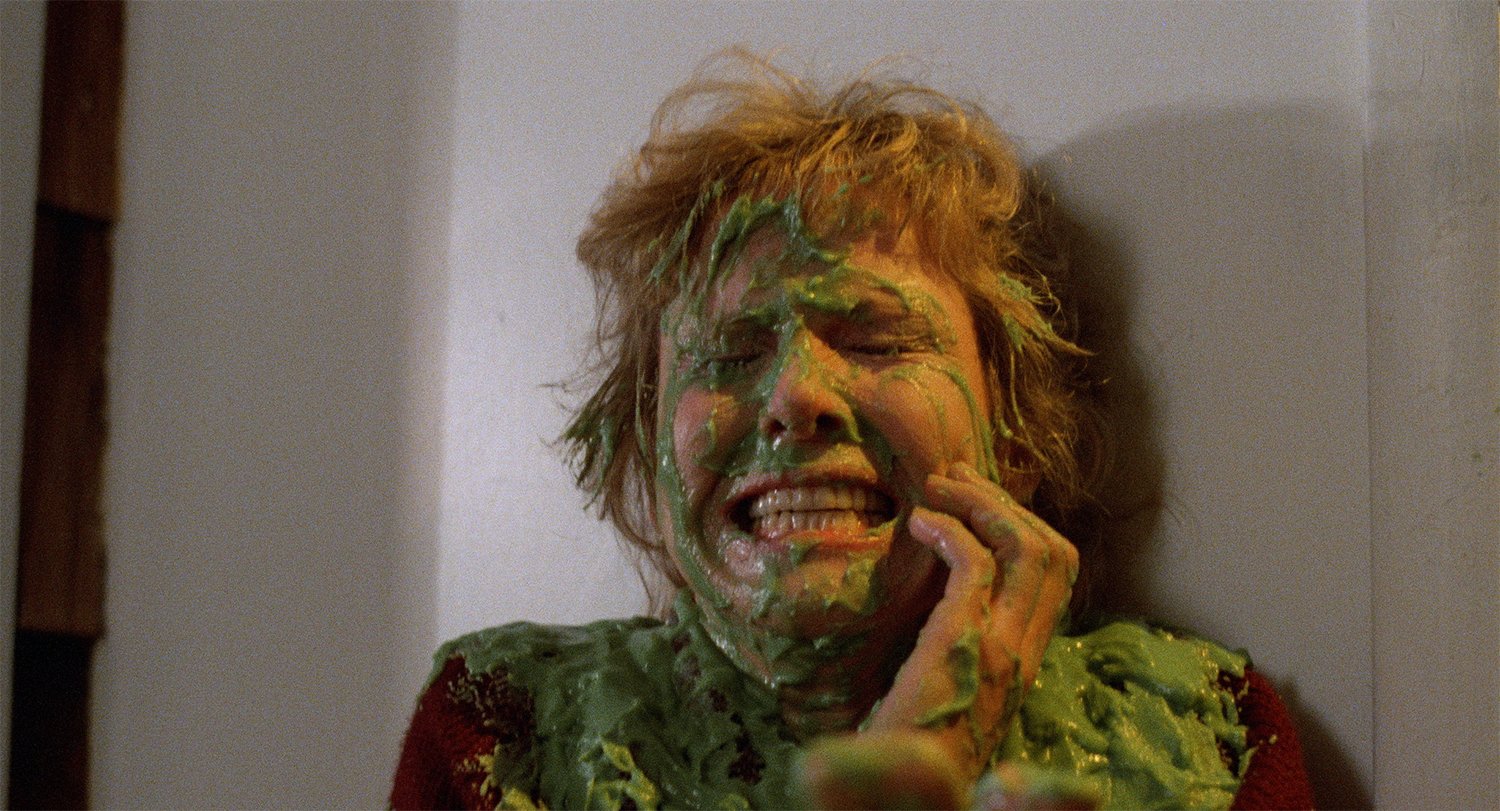 None of this is an excuse for atrocious behavior, which ranges from bullying and forced humiliation to borderline rape and full-on breaking-and-entering, but if you factor in the culture of the times, then you get a sliver of better understanding. Hell High is not the fun slice of 1980s slasher-schlock you can throw on with your friends and a twenty-four pack of Natural Ice. It is less Slumber Party Massacre 2, which is the perfect combination of crazy cult fun and smart direction, and more tonally akin to Rene Daalder’s 1976 masterpiece, Massacre at Central High.

The grim tone, the dangers of trying to monster one’s way to alphahood, and the feeling of a generation wholesale neglected by their families, are certainly all there in spades with both films. However, the biggest difference is that with Massacre, there are genuinely likable characters, making the film’s trajectory and inevitable conclusion all the more poignant and sad. Also, unlike Massacre, which lives in a universe where adults are absent to the point of being borderline invisible, Hell High has a number of adult characters, including the main target of bullying, teacher Brooke Storm (Maureen Mooney). Via an opening flashback, we see Brooke as a little girl and a fateful afternoon in the nearby swamp that proves to shape her for the rest of her adult life into a tightly wound shell of a woman.

The roll of life’s dice for Ms. Storm gets worse, between being sleazed on by a football coach who could be aptly described as possessing, “…macho Coors lite energy…” and teaching a class full of students that are the JC Penney’s version of the Class of 1984 kids minus the color and charm. Movies set in high school, horror or not, usually have at least one stereotypical honor roll student aka the nerd, but not in Hell High. What’s the point of fancy book learning when the most brain-damaged variation of fatalism has entered the metaphorical drinking supply?

One film that immediately struck me as a true heir to Hell High, though granted it’s like one of those weird third cousin heirs that had kids with a carnival-ride operator, is 1986’s Slaughter High. It has flashbacks, fatalistic perils of bullying, mental health issues, “teens,” characters that are 99% wholly unlikeable, and even a creepy mask used for effective horror. However, a lot of these similar traits reflect one another like an inverse sideshow mirror. In Slaughter High, the character of Marty (Simon Scuddamore), is traumatized and even disfigured as a youth in a flashback, only to return as an adult seeking bloody retribution. Brooke Storm in Hell High wasn’t disfigured physically and didn’t get bullied as a child, but rather as an adult, but the threads are there. (Admittedly they are a little ratted out and sticky, so bear with me here.) 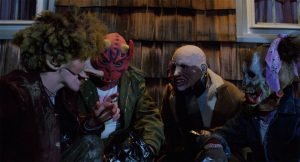 Then there are the masks…plural in Hell High and singular in Slaughter High. The former are donned by the group led by head miscreant Dickens (Christopher Stryker) as they stomp around, dump swamp sludge, and scream on top of Brooke’s home. The creepiest of the rubbery visages is saved for Dickens who goes one step further, breaks into the house and attempts to sexually assault the poor woman. The villains mask up to attack the victim, not knowing that she will soon switch roles with nary a disguise needed. In Slaughter High, the film’s iconic jester’s mask is donned by adult Marty, becoming the ultimate victim turned tormentor, who only takes a moment to reveal himself towards the end of the film. With both films, the odds of having much sympathy for most of Marty and Brooke’s targets are slim to none.

Slaughter High’s exception might be Carol, but that has more to do with having Caroline Munro play her than anything else. Hell High’s characters are even more negligible, with any moments of possible redemption being squashed immediately. The closest to a protagonist is Jon-Jon (Christopher Cousins, which is a great case of a ridiculous character name being acted by a whimsically named performer), the ex-football player. But his weak protests against Dickens reveal Jon-Jon’s real nature, as he not only goes along with most of it but only takes a stand when he fears his future will be negatively impacted. The sole female of the gang stops Dickens from full-on rape, only to straddle a semi-unconscious Brooke and feel her up in a bid to show her psychotic frenemy how to really treat a woman.

Both films accurately paint a picture that every school entrance should be painted with the words, “Abandon All Hope Ye That Shall Enter.” Hell High is a tighter and technically a better film, but Slaughter High has Marty, who is given a little more dimension and, dare I say it, heart than we ever get with Brooke. (A huge part of that credit needs to go to Scuddamore, who tragically died before the film was released, being one of horror cinema’s big what if’s.) Either way, if you seek a film that goes deep and dark into the recesses of the infernal fringes of teendom, Hell High awaits you. When you’re finished with that, Slaughter High is the perfect, b-grade chaser.

Heather Drain is a US Southern-based writer of film, music, esoteric culture, and prose writer. She has written for numerous publications and websites over the years, including Diabolique, Rue Morgue, Soledad, Dangerous Minds, Video Watchdog, and more.