Hollywood has a long tradition of pitting their stars against the English. A trend perhaps primarily owned by Mel Gibson and his habit of adopting a variety of accents, throwing arrows and fake blood about and shouting about “Freedom!” with extra o’s. But arguably it began earlier than that. Although it is certainly not the realm of modern Hollywood to have movie stars take the helm as directors, few are as prolific as those who took on epic and/or historical stories in the 90s. Perhaps a self indulgent choice in hindsight, these men (and they were always men) would cast themselves as almost mythical heroes. Beyond reproach, the perfect specimens, representing all that is good, strong and masculine.

Even those stories set in other countries are anchored in Americana, permeated with comparisons to church, weaving with state, and concepts of liberty and freedom.

Few actors represent this trend more cleanly than Kevin Costner, particularly in the films he acted in (and sometimes directed) between 1990 and 1997. Robin Hood: Prince of Thieves despite its basis in English legend, has little to define it as a British film. Costner’s Robin of Locksley makes no effort to hide his American accent, and faces up against reliable English bad guy, the sadly missed Alan Rickman as the Sheriff of Nottingham. The geography is nothing short of chaotic, as Robin and his companion Azeem (Morgan Freeman) land in Dover before taking a short stroll up to Northumberland and then back down to Sherwood Forest. It’s an oversight one expects British film-makers wouldn’t have made, but it is good for a giggle. 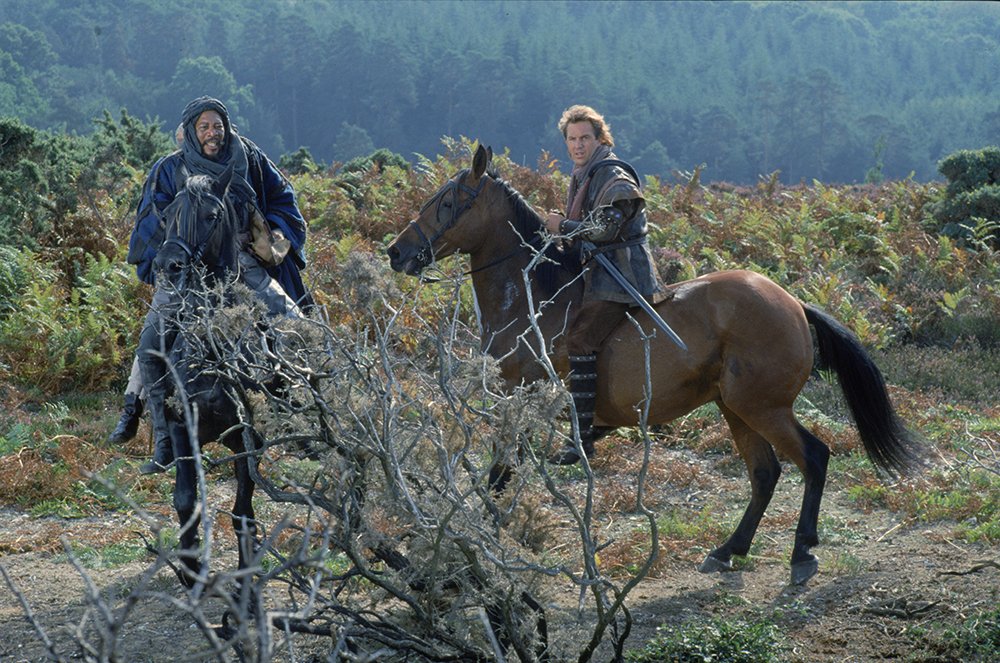 “I don’t know where I am but it’s somewhere near…Nottingham?” – Robin Hood (Costner) and Azeem (Morgan Freeman) find a way home in Robin Hood: Prince of Thieves (1991)

Costner’s heroes often lean towards the reluctant, in The Postman extremely so, as his journey to heroism begins with desertion, a lie and arguably, thievery. Robin is identified as a bully prior to the Crusades but changed by war to someone who will fight for his heritage. With one moment openly comparing him to Christ as he rises from apparent death in a ball of light. In other stories, that transition happens on screen. Dances With Wolves has him as almost a deserter, whose actions to avoid losing his leg lead his superiors to mistakenly label him a hero. Meanwhile, he has little sympathy for the war he fights in. Finding himself relocated to a remote outpost he makes no effort to find his way back to his regiment for more orders, glad of the recuperation. Instead, spending his time ingratiating himself with the local Sioux, and writing in his diaries. These written musings are read out as a Jack London style voice-over, anchoring the feel of the film in American narrative tradition. His relationship with the wolf that shows interest in his camp furthers this comparison, as does his emotional growth and increased connection with the land surrounding him, as opposed to his characters contemporary’s obsessions with Manifest Destiny.

That’s not to say that Manifest Destiny doesn’t permeate these stories too. Waterworld and The Postman in particular have Costner’s Mariner and ‘The Postman’ respectively, both as nameless characters attempting to find a mythical future. These characters are avatars of a typical American man. Seeking land that will allow a new way of life, and freedom to pursue a future impossible in their previous homes, or a quest to re-establish connections, ownership and control of a complex network of communication that allows a return to progress that has been lost.

The Postman makes enemies of fascism, in a militaristic racist group that contradicts the ideals of liberalism and equality. The Holnists, led by Will Patton’s General Bethlehem, are a somewhat ironic villain, bearing more resemblance to the discrimination that permeates almost all wealthy countries, but being shown as the antithesis to the American dream, while the new world that a functioning mail service offers is a representation of it. 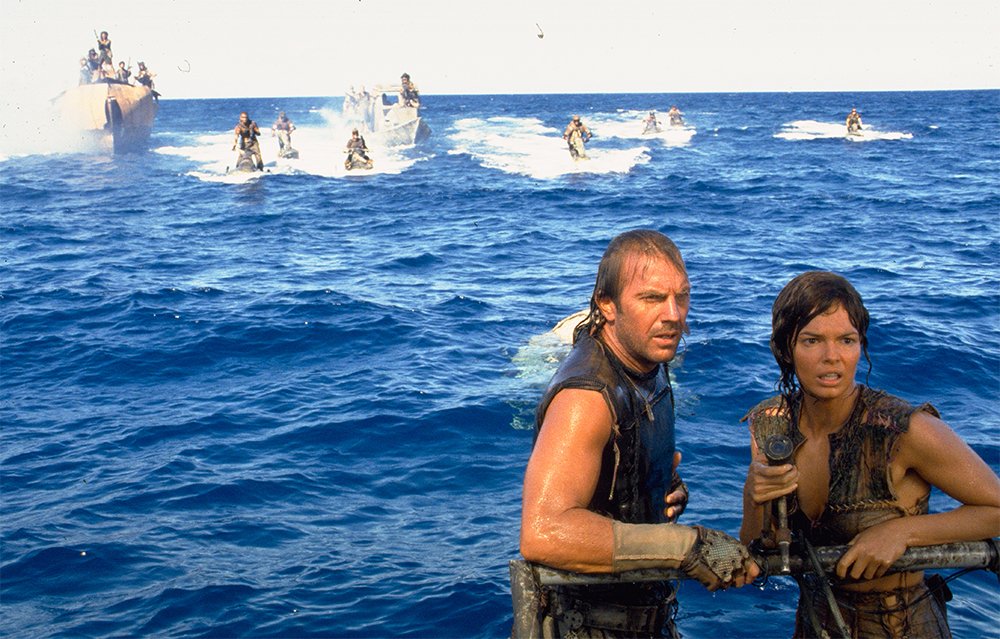 If you live in Waterworld, expect to get wet – The Mariner (Costner) and Helen (Jeanne Tripplehorn) face life on the high seas in Waterworld (1995)

Waterworld‘s “Mariner” is possibly the most misanthropic of Costner’s characters. The epitome of a reluctant hero, he resists the invasion of Helen (Jeanne Tripplehorn) and Enola (Tina Majorino) on his boat. Regular conflicts arise between them, with him becoming frustrated with the action of a child. However his sense of morality wins, as they have saved him from a very unpleasant death. Despite his lack of need regarding dry land – he can dive and acquire dirt with little difficulty thanks to his evolutionary advantages. A familial understanding and affection grows between them, encouraging the Mariner to let go of his previous resistance to society. Similarly to The Postman, events in the plot move him from a lone wolf to a member of a new and better society. Further emphasising these films’ subtext of encouraging collaboration against hardship, rather than acting only in ones own self interest.

While Costner’s films are often reliant on a connection to that myth of the one man and his ability to change history, there is an earnestness to them that allows audiences to overlook this rose tinted view of life and enjoy the journey. Dances With Wolves stands alone amongst these by forcing Costner’s Lieutenant Dunbar to leave his adopted family and return, with his new wife Stands with a Fist (Mary McDonnell) – a white woman raised by the Sioux – to his own kind. That the two white adoptees find love together and return to their roots is contrary to the usual approach of these stories, where groups mix and come together to create the cultural melting pot the USA is known to be. However, that selflessness still persists in our hero, as this is not a choice he wants to make, but one he must, to protect his new, and true family. A sad epilogue tells us that thirteen years later the final free Sioux submitted to white authority, suggesting that the fight was for nothing. Dunbar’s actions did not save his chosen family.

Of course you could still interpret this move as representative of Manifest Destiny in a way contrary to Costner’s other stories. However, applying such a negative spin as to be critical, pointing out that like all colonial action it benefits some while destroying others.

Primarily, Robin Hood: Prince of Thieves, and most of Costner’s contemporary output, is a romp. It encourages audiences to lean into the dreams of a hopeful and positive world, where life is simple and there is a clear line between bad guys and good. Adventurous leaps with Christian Slater proclaiming “Fuck me! They cleared it!” may surprise those of us who used to watch it regularly on the telly, where the swears were amended to a far more British “Blimey”. But they are funny, charming, and exactly what they should be. A moments respite, from a simpler time.

In between editing at Filmhounds, and chatting with fellow podcasters on FILM &, Mondo Moviehouse and Video Capes; Erika likes arguing on the beach, long walks on the internet, intersectional feminism and neurodiversity.