The year after American actor Karl Malden starred as Cookie, the blind amateur detective in Dario Argento’s classic giallo The Cat O’ Nine Tails in 1971 (out now on UHD from Arrow), he would kick off a 5-year run co-starring with a young Michael Douglas in the hugely popular American prime time cop drama, The Streets of San Francisco. The Oscar-winning actor had by this time already established himself as a Hollywood great, working in feature films alone since the early 1940s with directors of the calibre of George Cukor, Elia Kazan, Otto Preminger, Alfred Hitchcock, King Vidor, John Frankenheimer and John Ford. Putting in an electrifying performance alongside his captivating co-star, child actor Cinzia De Carolis who plays his niece Lori, although only Argento’s second directorial feature The Cat O’ Nine Tails certainly wasn’t his first time working with imported talent; his blockbuster 1970 giallo The Bird with the Crystal Plumage, of course, famously starred American Tony Musante and British Suzy Kendall.

This would become a consistent thread throughout Argento’s filmography, with Deep Red (1975) starring British actor David Hemmings, Suspiria (1977) showcasing Hollywood stars Jessica Harper and Joan Bennett, Inferno (1980) featuring American actors Irene Miracle and Leigh McCloskey, Phenomena (1985) starring Jennifer Connelly and Donald Pleasence, right through to later in his career where Bridget Fonda was intended to play the role finally given to Argento’s daughter, Asia, as the lead character in The Stendhal Syndrome (1996). Christopher Walken was originally intended for the role of fellow American actor Anthony Franciosa in Tenebrae (1982), and as early as Four Flies on Grey Velvet (1971), Argento and his team were casting an ambitiously wide net for international talent to star in the role that eventually went to American actor Michael Brandon and Mimsy Farmer. Amongst those they sought to woo for the lead part were Terrance Stamp, Michael York, Jean-Louis Tringtignant, with even John Lennon and Ringo Starr being considered at one stage. 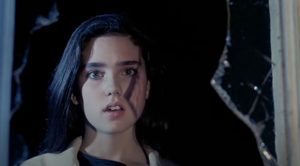 Jennifer Connelly as Jennifer in Phenomena (1985), one of her first screen roles

While Argento’s giallo films might be the place where these big names dazzle the most, a closer look of course reveals that this was hardly unique to that director alone. In fact, this casting of famous foreign – especially American – movie stars was a defining feature much Italian cinema production during this era, especially giallo. As seen through the films of giallo regulars including Carroll Baker, John Saxon and Farley Granger, American movie stars in these films were far from rare.

These films – often described as kind of sex-and-horror imbued thriller/mystery hybrids – are supposedly marked most immediately by their signature iconography (black leather gloves, switchblades, etc). But as many critics have noted, they are just as much marked by their internationalism, both through their frequent status as international co-productions and, in terms of the content of the films themselves, their emphasis on what was at the time of their original releases a dramatic cultural shift that tended to focus on modern living, where guilt-free sex and a jet-setting, international lifestyle were all markers of an exciting, glamorous new world. But this new world brought with it fears and anxieties that lie at the heart of giallo cinema; the world of these films was modern, yes, but also marked by danger, which in these films seems to be hiding, lying in wait around every corner. Giallo films are, as so many critics and scholars have observed, fundamentally ambivalent about their relationship to the cultural changes at the time in Italy that marked the rise of modern living.

Sometimes specific products were included in these movies to signify a sophisticated, more global way of living (such as the famously ubiquitous bottle of J&B whiskey that turns up so frequently). Reflecting the international co-production nature of these projects, an impressive number of these movies were also set in foreign, often exotic, non-Italian locales; there’s Flavio Mogherini’s 1977 Australian-set The Pyjama Girl Case, Riccardo Freda’s The Iguana With the Tongue of Fire (1971) which is set in Dublin, Short Night of Glass Dolls takes place in Prague (Aldo Lado, 1971), The French Sex Murders (Ferdinando Merighi, 1972) set in Paris, The Killer Is on the Phone (Alberto De Martino, 1972) is based in Bruges, while a number of gialli including All the Colors of the Dark (Sergio Martino, 1972), What Have You Done to Solange? (Massimo Dallamano, 1972), Hatchet for the Honeymoon (Mario Bava, 1970) and A Lizard in a Woman’s Skin are all set in London. Both Seven Murders for Scotland Yard (José Luis Madrid, 1971) and The New York Ripper (Lucio Fulci, 1982) wear their hearts on their sleeves in a pretty self-explanatory manner when it comes to their foreign locations, and Seven Deaths in a Cat’s Eye (Antonio Margheriti, 1973) goes as far as to not merely be set abroad, but to feature a cameo by iconic French crooner Serge Gainsbourg as a somewhat unconvincing Scottish police investigator.

David Hemmings as Marcus in Deep Red (1975). Hemmings’ work with another Italian director, Michelangelo Antonioni, in Blow-Up (1966) had propelled him into stardom.

There was a dual benefit for giallo films to amplify this international aspect, be it through the casting of big-name stars from Hollywood and beyond or the highlighting on the foreign locales where these films are ostensibly set. On one hand, it made the films very export friendly, as they could play well beyond the geographical boundaries of Italy itself, especially with the post-production dubbing industrial norm that made it easy to simply add different language tracks to play to different markets. But at the same time, the exotic nature of these films meant that for Italian audiences, these films felt somehow bigger, grander, more exotic than just another local production. The big names, the famous international locales, these all added an air of sophistication that transported their local audiences to a world well beyond that of Italy itself.

This tendency towards internationalising giallo often saw Italian directors adopting more Anglo-sounding nom-de-plumes for similar reasons; Antonio Margheriti was at times credited as Anthony M. Dawson, Giuliano Carnimeo of The Case of the Bloody Iris (1972) as Anthony Ascott, Lamberto Bava as John Old Jr., Mario Gariazzo of Play Motel (1979) as Ray Garrett, and Gianni Matrucci of Trhauma (1980) as John Martucc, just to name a few. Likewise, Italian and European movie stars would use English-language sounding screen names such as Ida Galli who would appear as Evelyn Stewart, Nieves Navarro as Susan Scott, Renato Rossini as Howard Ross, and Jorge Hill Acosta y Lara who is more familiar to his many fans simply as George Hilton.

But just as the emphasis on breaking down national boundaries marked giallo cinema during its boom period of the 1970s especially, as much as this allowed these films to work across national borders during their original moment of release, so to this is surely one of the many elements that have added to their endurance across time, too. This internationalising tendency is thus one of the many factors that surely make giallo films today one of the most passionately defended and beloved categories of cult film, for fans and criticism alike. At their very best, both then and now audiences like their giallo full of excess; we want our colours vivid, our spectacles large, our dramas over the top, and our movie star names very, very big.