The release of Robocop in 1987 gave us one of the defining films of the decade as well as the science-fiction genre as a whole. The iconic design, the quotable dialogue and the unforgettable characters infused with a rare trifecta of blistering wit, social commentary and explosive action, Robocop has sustained interest for over 30 years and continues to entertain audiences today. It also stands out as being one of the first cyberpunk films and possibly even the definitive. With the news of Arrow releasing Robocop on UHD, we take a look back at this iconic film and it’s cyberpunk credentials – Come quietly or there will be trouble!

Arguably popularised by Ridley Scott’s Blade Runner (1982) based on Philip K. Dick’s book ‘Do Androids Dream of Electric Sheep?’, the cyberpunk genre on film classically depicts a world where technology rules under the auspices of corporate giants. Amidst this digital revolution, there is a class of people left behind and ready to revolt with the hi-tech and the low-life co-existing uneasily side by side. Heroes of cyberpunk are marginalised, fighting up against the oppression that threatens to remove them from existence.

Visually, these films are frequently represented by cities at night dominated by neon lights, skyscraper filled skies and reflections in watery streets. Plot wise, crime is always front and centre. They’re a version of sci-fi noir, hard boiled tales of a harsh world with unforgiving people mixed with cutting edge technology and glimpses of a promised future. With this in mind it’s easy to see how Robocop helped to shape this aesthetic. 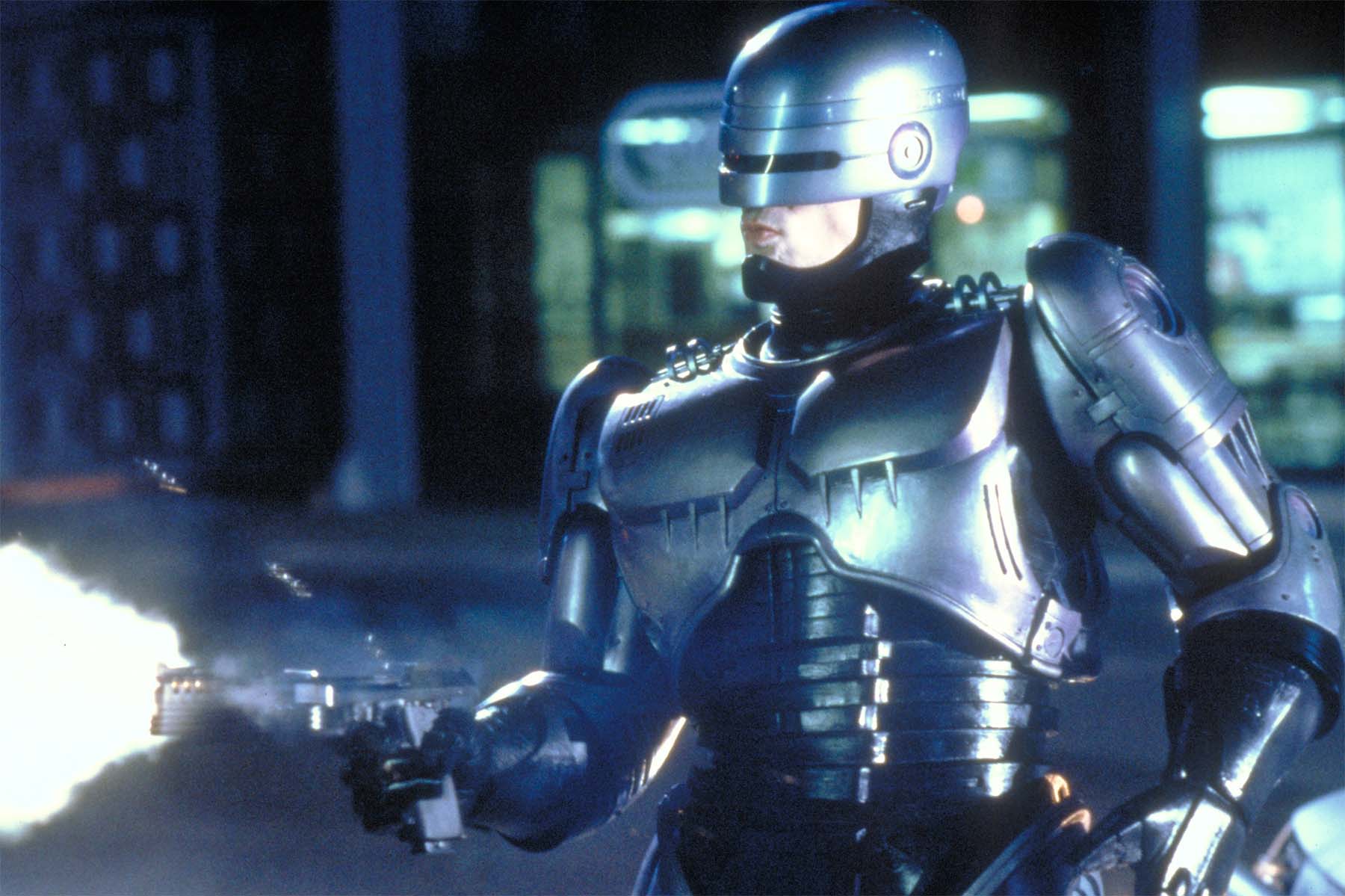 The marginalised hero is undoubtedly Robocop and, to the same extent, Alex Murphy (Peter Weller) as one of the central themes to Robocop is how much of Murphy’s identity is still part of the machine. To take this more literally and talk about the physical characteristics, Verhoeven’s film doesn’t delve into the specifics of what is actually left of Murphy to form Robocop although we can safely say parts of his face and brain are still in their original form. The question as to whether Robocop has a heart or not is unclear. Those questions become less important as we are asked to consider what it is to be human – is it defined by bodily mechanics or those untouchable qualities like free will and dreams? Although the film offers a suggestion, we the audience are left to ponder where the man Murphy ends and the machine Robocop begins.

We literally see the change in Alex Murphy from police offer to cyborg and in doing so, the nuances of his character becoming heightened to the extreme. In his role in the police, Murphy was serving the public trust, protecting the innocent and upholding the law but as Robocop and these codes as his built-in prime directives, he has no choice but to abide by them.

If before he was doing his best to be a model officer, now it’s the only thing he can do. Murphy hasn’t gone rogue or out of control, quite the opposite in fact as he’s more in control than ever except he’s been manipulated to the point where the choice to exert that control is being made by somebody else. Murphy as an augmented human is a perfect example of the cyberpunk protagonist. 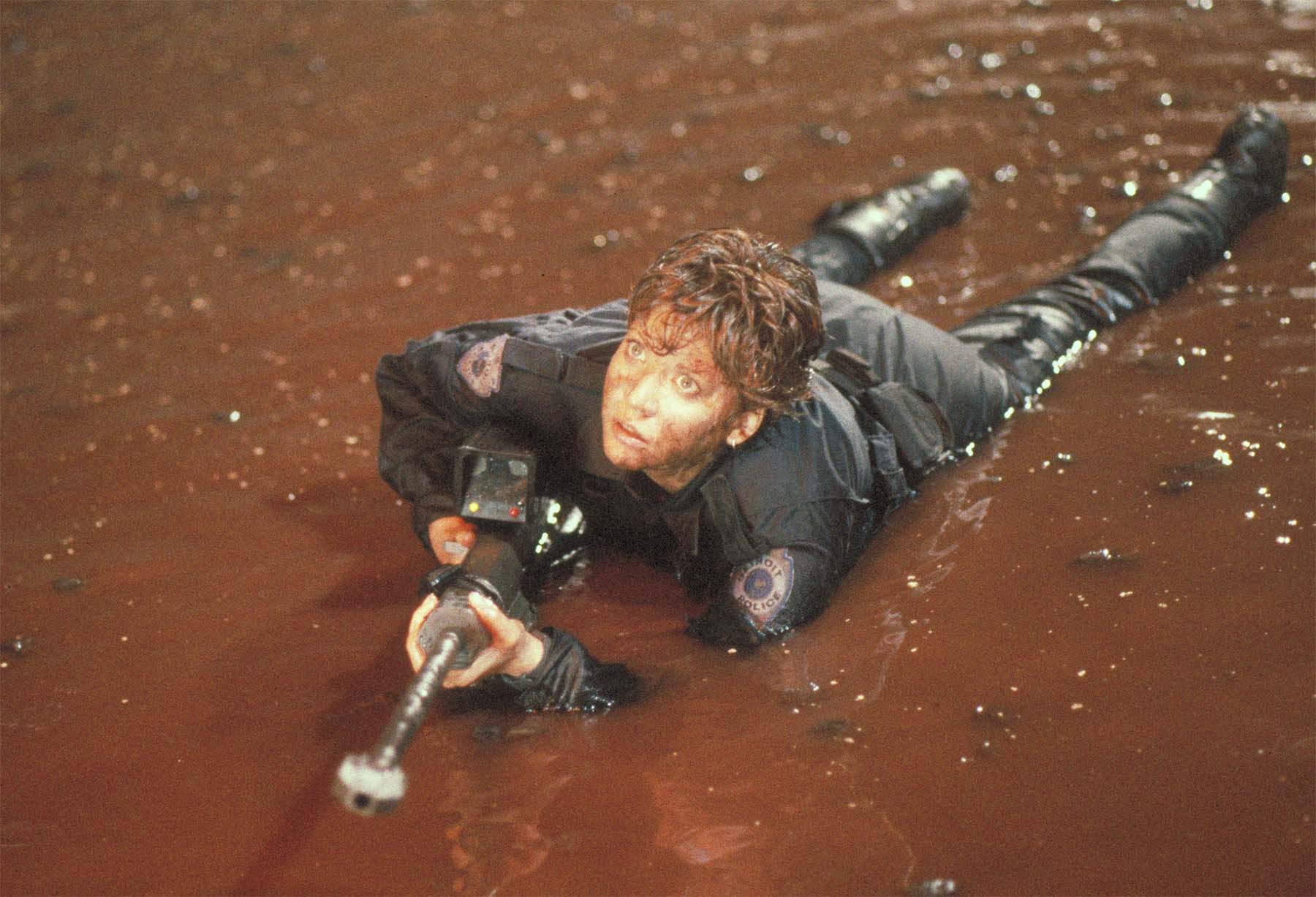 A bad day at the office for Officer Lewis (Nancy Allen)

This is why Robocop isn’t the bad guy here. He’s the victim of a super efficient but rotten system. If you’re looking for a bad guy though there’s a host of scumbags to choose from. Clarence Boddicker (Kurtwood Smith), crime lord badass and a guy quite willing to stone cold execute a serving police officer would be the obvious name on the surface but then you’ve got the monstrous Dick Jones (Ronny Cox), senior president of OCP whose pulling the strings as well as a great personification of the 80s greed-is-good mantra in executive Bob Morton (Miguel Ferrer). They’re all worthy adversaries but the thread that runs between them is the OCP, pushing humanity to it’s limits for profit and disregarding morality for the sake of appeasing their shareholders. The corporate, big business world of the OCP is the real enemy here and one even Robocop himself is beholden to.

In one of the film’s most memorable scenes, Robocop loses his body in a brutal shootout with Clarence Boddicker’s shotgun wielding gang. With Officer Alex Murphy isolated and surrounded by Boddicker’s men in a grimy warehouse, they take great pleasure in unleashing countless bullets into Murphy’s exploding torso. As Murphy’s body is literally taken apart by the gunfire, his anguished cries are drowned out by the cruel laughter from the gang. Despite this onslaught, Murphy is still alive before Boddicker delivers a seemingly fatal gunshot, an exclamation point on the bloodshed that precedes it.

It’s unforgiving in its brutality and the graphic violence has lost none of its power today. It seems impossible that anyone would survive but of course we know he will, he has to as the cyberpunk theme makes it possible with advanced technology coming to the fore, and the cold-blooded sadism setting a perfect tone for a story of vengeance to begin. 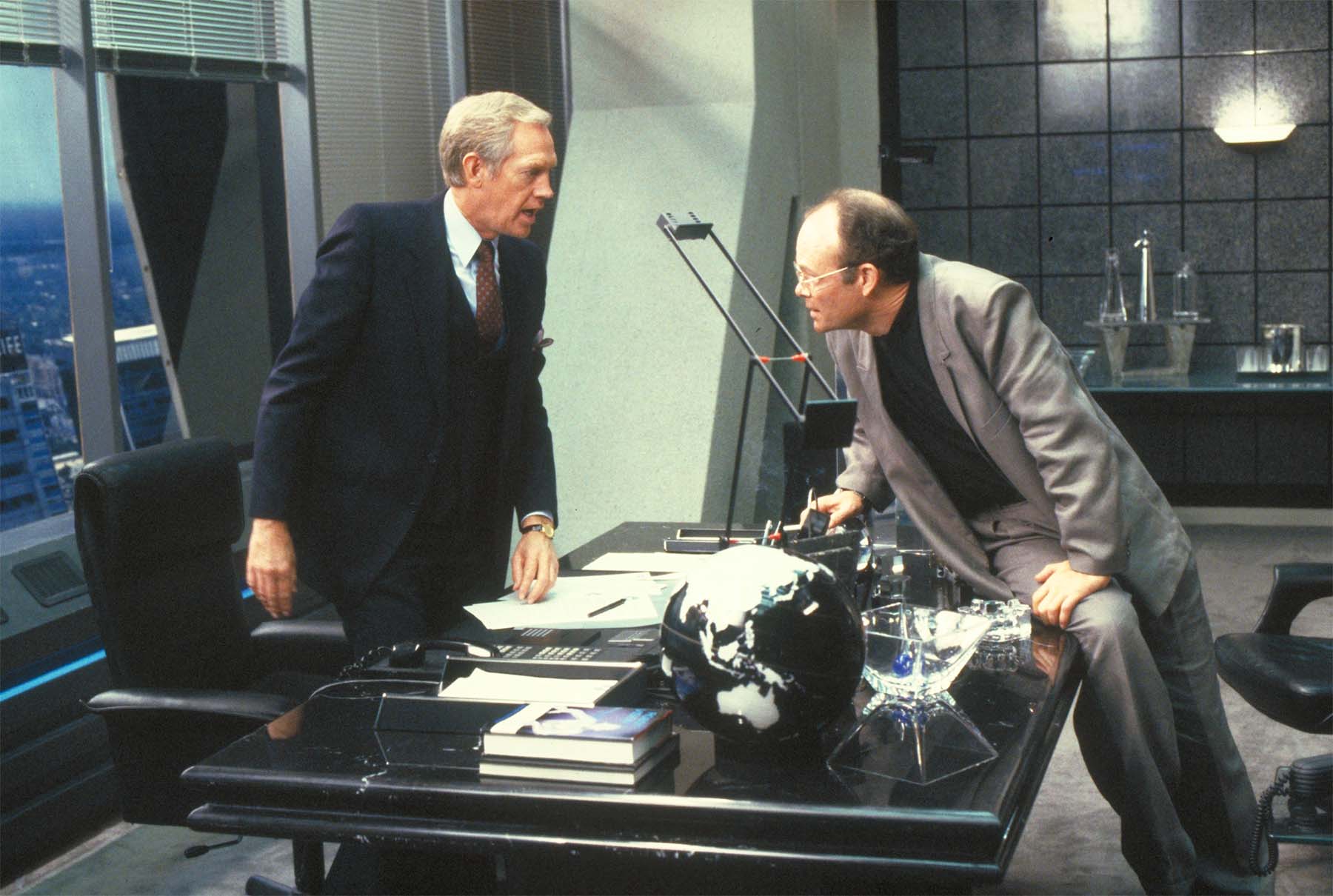 There have been four Robocop films to date as well as 2 television series, all of them maintaining the crucial cyberpunk aesthetic. Robocop 2 (1990) came quickly after the first one and received a mixed reception. Ramping up the scumminess with a drug-dealing 13 year old but lacking the satire and deftness of touch of the first, it’s a dark film that depicts society as even worse than we could imagine in the original. Anne Lewis (Nancy Allen) who had a crucial role in the first one is practically relegated to a side character and the importance of her relationship with Murphy downplayed. Paul Verhoeven had decided not to direct Robocop 2 feeling that the studio were looking to cash in on the character rather than spend time to develop something as innovative as the first one. He may have had a point.

With the sequel done without Verhoeven, it was soon time for the lead actor to drop out of the franchise too. Peter Weller decided not to be in Robocop 3 (1993), opting instead to appear in David Cronenberg’s adaptation of William Burrough’s Naked Lunch. It was left to Robert John Burke (Tombstone, Thinner) to fit into the suit and even take to the skies in a new jetpack which unfortunately wasn’t mirrored by soaring box office receipts for the beleaguered Orion Pictures.

The reboot came in 2014 from director José Padilha (Elite Squad, Entebbe) which depending on your mileage either nicely captured the spirit and satire of the original or completely missed the mark.

Ultimately, Robocop is one of the first explicit depictions of the cyberpunk genre on film and although others have emerged with their own representations, Robocop manages to distil so much of it into one ground-breaking film. It’s all here. The plot focus on the mechanisms of crime and corporate greed. The mixture of low-life and high-tech being most visible with the run-down Detroit being patrolled by the futuristic Robocop himself. The loner protagonist, isolated physically and mentally from his loved ones.

Cyberpunk stories usually make predictions about our future and the world we could inhabit. Some may argue the extreme nihilistic capitalism of Robocop has not only come to pass but may be moving even further forward.

Robocop is available on UHD and Blu-ray from Arrow.

Kaiju Battle Royale: Who is Japan’s Most Formidable…