“Every single life is about construction and destruction.” ― Gasper Noé

Amongst the music and dance of it all, there is little defence to make against the things you witness in a Gaspar Noé film. You don’t ‘like’ the experience ― or even the majority of characters ― you endure and perhaps even appreciate the purity, no matter what gratuitous and disturbing lengths he will go to in dragging you by your balls and nailing them to the screen. Noé is not just the Antichrist (to most) but also an anti-intellectual ― voyeur, auteur and provocateur ― although this, as you will begin to understand, sounds somewhat of a contradiction. At the core of his movies, there is something that cannot help but elevate them above (what can often be dismissed as) notorious, self-absorbed and explicit adolescent fantasies.

So, for want of a better phrase, how do you ‘ease yourself into’ a Gaspar Noé film? There is little out there that doesn’t push buttons. But, in beginning to understand his signature style ― specifically his heavy use of POV and experimental camera work ― his music video for Nick Cave and the Bad Seeds’ “We No Who U R” (2013) is one of his most accessible pieces and as good a place to start as any. As “we breathe it in”, the roaming camera plays with shadow and the ‘void’ of negative space. Here, both the direction and lighting question if we are in fact experiencing something through the eyes of the wanderer or following some kind of entity ― an in-camera {ghost} effect ― roaming the forest at night and, in turn, highlights whether this truly is through the eyes of our disembodied character.

First-person perspectives have been used to dramatic effect in music videos before; none so perfectly as The Prodigy’s “Smack My Bitch Up” (1997). Directed by Jonas Åkerlund (Lords of Chaos, 2018) the technique served the narrative and juxtaposed the audience’s preconceived ideas already fuelled in the song’s antagonistic title. Noé’s other short works, Placebo’s “Protège-Moi” (2004) and Eva (2005) both evoke the explicit, lurid territory of Irréversible (2002) along with POV and constant movement of the camera [1]. Noé is all about the camera and his voyeurism makes his work all the more difficult to watch. In desensitizing audiences, technique becomes invisible; full immersion in the most intimate and extreme sense of the word.

A quiet night in watching television from Enter The Void (2009)

Cinema has always been about the ‘immersive experience’; ever since much earlier prodigies, the Lumière brothers’ [2], screened The Arrival of a Train in 1896. Audiences ― believing the train was actually approaching them ― fled the screening. In the years that followed, experiments with the camera focused on continuity of action; becoming an important part of film narrative. This led to the development of multiple shots established by film pioneer George Albert Smith, when, in 1900, he made the first edit utilising an optical POV shot in As Seen Through a Telescope. The 20th century saw the birth of feature-length productions; Robert Montgomery’s Lady in the Lake (1947) the first to be directed (almost) entirely through the eyes of the central character ― Raymond Chandler’s hardboiled private detective, Philip Marlowe ― another noir following the same year with Delmer Daves’ Dark Passage displaying an entire first act through the eyes of Humphrey Bogart’s escaped prisoner, Vincent Parry.

Of course, edited seamlessly over the years, the technique has become a crucial part of film language; effortlessly implemented by Alfred Hitchcock [3] in his 1954 masterpiece, Rear Window. The ‘Master of Suspense’ is all over Jaws (1975) and Halloween (1978); a young Steven Spielberg’s troublesome shoot leading to a more resourceful decision to submerge the camera, in which the audience would lurk through the eyes of the shark. Three years later, John Carpenter would deliver a POV twist during the opening act of his seminal slasher. Both these examples are less shock and awe gimmicks and more suspenseful narrative devices that have rarely been topped since [4].

Throughout his career, Noé’s own distinctive (and controversial) eye is not only about the roaming camera but also a densely detailed and grimy neo-noir palette owed to his collaboration with cinematographer Benoît Debie and graphic designer Tom Kan [5]. Inspired by Kubrick, he has inherited a unique but twisted mind that works between states of consciousness, exploring the contrasts between pain and tenderness, ecstasy and brutality. Much like the contrasts of colour onscreen… extreme on every level.

Although ‘New French Extremity’ is associated more with 21st-century filmmaking, its roots are found within the perverse history and works of the Marquis de Sade (1740-1814). Spanish filmmaker Luis Buñuel, along with artist Salvador Dalí, also pushed boundaries with their seminal 1929 ‘slice’ of surrealism and avant-garde cinema, Un Chien Andalou (An Andalusian Dog) displaying the notorious eyeball-slicing scene; an infamous piece of celluloid often considered one of the most influential films ever made. Other influences include David Cronenberg’s body horror and the Belgian serial killer mockumentary, Man Bites Dog (1992), which is a natural predecessor to Noé’s infamous Irréversible ten years later and subsequent torture porn of the noughties. 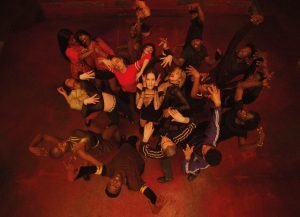 Working its way backwards, Irréversible begins with a cameo of The Butcher from Noé’s debut feature, I Stand Alone (1998), as a boyfriend hunts down his girlfriend’s rapist. An unbearable watch ― most notably for Monica Bellucci’s endless and unflinching rape scene in an underpass ― the film moves gradually towards the light. Where the Theatrical Cut climbs out of hell ― in an effort to erase what has happened to our lead ― the 2019 ‘Straight Cut’ descends into the inferno. This is Noé at his most nihilistic and hits home how much his films present men as dictators and the destroyer of worlds; their almost primordial (some would say Biblical) act of sex and violence as visceral as they come. In a 2019 interview with The New York Times, Noé stated that men are “… pretentious, and they always end up losing. Because I think there are more losers in this world than winners.” These small worlds ― a woman’s life, a couple’s moment, a family’s joy ― are often discarded by fleeting mistakes or (at their worst) destructive behaviour and the most heinous of crimes.

By the time Noé arrived at Enter the Void (2009) his filmmaking was ready to push how far the camera could travel, literally moving above and beyond what had come before. Everything from breathing to blinking, intoxication, (violent) death, conception and rebirth would be explored; nothing would be out of reach, making for one of the most immersive and purest cinematic experiences of all time.

Somewhat of a companion piece, Love (2015) has echoes of Enter the Void; the more explicit moments (see below) lifted verbatim. To label it pornographic (it is!) would lend the film some disservice. More ‘poetic porn’, it is a character study about the contrast between fleeting relationships and those life changing accidents that take hold of our life; an explicit and deeply intimate look at the pleasure and pain love causes. Of course, he had to shoot in 3D. One moment we are resting above the money shot, next we are inside an almost scientific probing vaginal perspective… of an ejaculating penis.

From one climax to another, arguably his most accessible feature still manages to put you through the wringer. What began as a documentary about street dancers evolved into a dance hall (rehearsal) acid trip that, on a deeper level, reads as a microcosm of social collapse. For Climax (2018), Noé opens by spinning his camera in a dizzying frenzy locked onto an unforgettable and striking dance before disharmony and LSD nightmares take hold.

More chaos ensues behind the scenes of a fictitious film shoot in Lux Æterna (2019). Accompanied by clips from Benjamin Christensen’s Häxan (1922) and Carl Theodor Dreyer’s Day of Wrath, it begins with an opening quote by Dostoevsky about the “supreme happiness” of epileptic fits, foreshadowing a modern hysteria. Debie’s heightened (lurid) contrast of tomato red and grungy lime becomes a giallo inspired green screen and the antithesis to effects-driven entertainment vehicles. In the case of Lux Æterna, it takes full advantage of the red and green strobe effect to (warning) induce an epileptic effect. Most of Noé’s work employs this intense device, forcing you to question your own sanity, mental state and any other boundaries you are forced to push through. During its short 50-minute running time we witness a hellish ‘eternal light’ and pure abject female suffering that the director (turned devilish dictator) calls for.

Despite Noé’s anti-intellectualism, the Lux Æterna feels like a ‘stab’ at the state of cinema and how audiences have become numb to commercial blockbusters, torturing us in the same way he feels about mindless Hollywood fodder. This is made all the more explicit through one of the opening quotes, “We filmmakers have a big responsibility. It is up to us to raise it from an industry to an art form.” Of course, there is room for both, but with Noé you’re the droog with your eyes clamped open… and there is often nowhere else to go but down. But, strangely, once you’ve been ‘conditioned’ there is something redemptive about his ‘art’.

As an audience we experience the worst of humanity while reminding us of those rare and tender moments; a juxtaposition of brutality and intimacy most would find particularly jarring. His latest, Vortex (2021), has been seen as a change in direction. Having been compared to Amour (2012) ― Austrian director Michael Haneke no stranger to extreme and experimental filmmaking himself ― Noé’s dementia piece (starring Dario Argento) was produced after he had a sudden brain haemorrhage and almost died. It would appear he has a few shocks left in him yet.

21st-century cinema presents a (post) digital world of virtual tours and virtual reality. The sensory overload of Noé’s work not only feels like the final frontier of innovative filmmaking but also the final circle of hell ― uncomfortably melding both exploitation and art house ― an ‘irreversible climax’ only few of us are brave (or insane) enough to experience… at least once in our lifetime.

<
>
[1] Noé’s meta approach and love of the avant-garde can be seen from the offset in his first film, the short Tintarella di luna (1985). [2] Noé studied filmmaking at the École nationale supérieure Louis-Lumière (Louis Lumière College). One of his earliest short films Carne (1991) … wait for it … showed a horse being slaughtered. If that isn’t controversial enough, the story involved an incestuous butcher and his mute daughter. [3] Hitchcock would take height measurements of his actors for the position of the camera to match the intercutting shots with the POV. [4] James Cameron’s ‘Terminator vision’ would be another natural precursor with Franck Khalfoun’s remake of Maniac (2012) and Ilya Naishuller’s Hardcore Henry (2015) some of the few films to deliver full POV throughout the entirety of their running time. [5] You can read more about Gaspar Noé and graphic designer, Tom Kan in my accompanying essay, “Noé Title: Sex, Death and Typography” in the Limited Edition of Enter the Void, out 30th May 2022.
Climax Enter the void Gaspar noe Lux aeterna

A lecturer in graphic design and film studies, Rich Johnson writes regularly for Fangoria. Along with Arrow Video, he has also provided essays and film commentary for Second Sight Films, 101 Films and Eureka Entertainment www.richpieces.com | @richpieces

The Devil’s in the Detail: A Look at The Exorcist III

Ten Circles of Hell: Raising the best of Clive…

Yuletide Frights – A compendium of Crazy…