Katzman, a producer / director with an eye for the absurd, churned out so many schlock masterpieces that Arrow could release 23 box sets and still not scratch the surface of his output.

But these first four oddball masterpieces serve as the perfect introduction to Katzman’s eye-popping legacy. Not just because they’re great films within his own oeuvre, but because they all have something to say about the era in which they were thrown at audiences.

They contain the everlasting impact of the grindhouse classics made on the cheap, playing to huge crowds. Those crowds went out and made their own movies, and you can trace significant movements through these four films.

So let’s lower the house lights (or turn off your car headlights), and I’ll explain exactly what I mean… 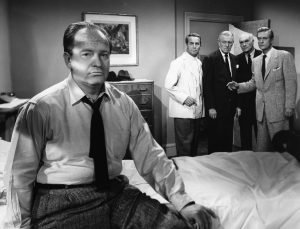 Scene from Creature With The Atom Brain (1955)

Originally paired with another Katzman creature feature, It Came from Beneath the Sea, this radioactive b-side is even more bonkers than the main feature, revolving around atomic-powered zombie Nazis that have been resurrected for a rampage of revenge!

The next big Nazi zombie wave came in the late 1970s / early 1980s, long enough for those kids who grew up on these flick to get old enough to pick up cameras themselves, and movies like Shock Waves (1977), Zombie Lake (1981) and Night of the Zombies (1981) didn’t contain a single voodoo ritual. 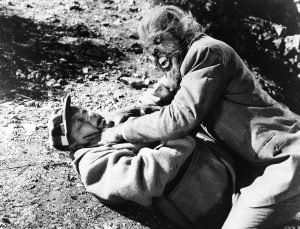 In The Overlook Film Encyclopedia: Science Fiction, Phil Hardy claims that The Werewolf, “Marks precisely the point in which horror, which had been a dormant genre in the early ’50s, began to take over from science fiction”

It would already be important for that fact alone, but The Werewolf is special for another reason – it resurrected the werewolf movie, bringing it screaming into modern America.

Before The Werewolf, werewolves were mostly associated with Europe – Werewolf of London (1935) took place in… well, you can guess, The Face at the Window (1939) was in Paris, The Wolf Man (1941) took place in Wales, in The Undying Monster (1942), the man wolf was inspected by Scotland Yard, and so on…

The Werewolf brought the genre howling into a contemporary USA, and – once again – a resurgence came in the early 80s, with the double-whammy of modern day Americans dealing with the disorder (even if one of them was on a European holiday at the time). Because, without The Werewolf, would we have had The Howling (1981), or An American Werewolf In London (1981) to lead the pack?

It’s hard to say, but one thing’s for sure: The Werewolf – and the b movies that immediately followed it, stuff like I Was A Teenage Werewolf (1957) – had a major impact on horror history, and it deserves a place in your collection. 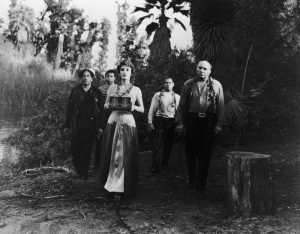 Unless you’re a psychotronic freak like me, there’s a good chance you’ve never heard of Zombies of Mora Tau, let alone seen it. But you probably have seen Pirates of the Caribbean, or at least heard of it. You’ll definitely have heard of Disney, a company that was once led by absolute Zombies of Mora Tau MANIACS.

It’s the only way to explain the fact that the company greenlit a major blockbuster with basically exactly the same plot.

In Zombies of Mora Tau, a group of treasure hunters find a cursed ship filled with zombie pirates who have been cursed to guard their treasure (here, it’s diamonds), and will remain undead while they do. Sound familiar? Swap out the diamonds for gold pieces, and you’d expect Jack Sparrow to come swaggering through a film released 46 years earlier!

Sure, Katzman’s classic has a slightly lower budget, and the pace isn’t quite as intense. But you can watch it twice in the time it takes to watch Pirates of the Caribbean once, and that makes it a winner in my book. 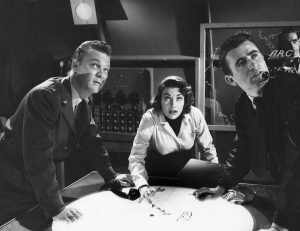 Now, I’m certainly not saying The Giant Claw is the first, or the most important, American giant monster movie. That honour goes to King Kong (1933), the astonishing film that (along with Japan’s 1954 Godzilla) most inspired the ‘50s wave of massive creature features that stomped across drive-ins. It’s not even the most important big beast movie released in 1957, that honour goes to 20 Million Miles to Earth (get back in your shell, Attack of the Crab Monsters – and you can mollusc off too The Monster That Challenged the World).

However, it is easily the most preposterous, ridiculous and – most importantly – FUN monster movie of its era, feeling more like a precursor to Sharknado, and especially Birdemic, than any of its contemporaries.

Trust me when I say this is the most entertaining movie you’ll see all year. It’ll make Marvel’s Eternals look like double-geography in terms of sheer fun.

The story sees a giant bird from ‘an antimatter galaxy’ soaring over the North Pole and into America, where it (very goofily) attacks the Empire State Building and United Nations building, with humanity struggling to defeat this seemingly indestructible creature.

With a design that should have been as iconic as the Xenomorph, the titular creature looks like a child’s toy that’s been used as a football on gravel. This, in case I’m not being clear, is a very good thing. If you’ve ever felt even the slightest affection for a Muppet Show cast-member, prepare to fall deeply in love with The Giant Claw.

It’s absolutely the gem of this box set, it’s the movie I’ll be buying it for. The idea of seeing this bug-eyed bird jerkily flying (‘faster than a jet plane!’) on crystal clear Blu-ray is basically going to be a highlight of my entire movie shelf. I might buy a spotlight so I can aim it right at it.

But, hopefully, I’ve proven that all of the films in this limited edition collection are worthy of your attention. Now, all I have to do is hope for another 22 joyful installments of these glorious Sam Katzman box sets.