One of the most beloved American horror films of the 1970s, Brian De Palma’s Carrie brought Stephen King to the screen and Sissy Spacek into our cult movie loving hearts. This sad, wild tale tells of the lonely title character, the daughter of a religious zealot, who becomes aware of her telekinetic powers with the arrival of her first period. But the transformations don’t end there. When bullying at the hands of the local high school mean girls reaches fever pitch, all roads lead famously to prom, and the night Carrie has been dreaming of turns into a nightmare for, well, pretty much everyone. A rare horror film that received not one but two Oscar nominations (Best Actress for Sissy Spacek and Best Supporting Actress for Piper Laurie), Carrie is a horror star that will never stop sparkling. To celebrate its arrival on Arrow Player, it’s time to go back to school and relearn our ABCs…

A is for Adaptation

Released in 1974, Carrie was horror literary icon Stephen King’s first published novel, and his name has been synonymous with the genre ever since. The first of his works adapted to film, for almost half a century his tales of terror have been lighting up the screen, making Carrie a significant first.

B is for Blood

Plug it up, indeed! Whether it’s menstrual fluid or pig blood, Carrie – the film and the character – is plagued by both. Will spilling the blood of those around her help even the score? There’s only one way to find out.

C is for Cassie

No – it’s Carrie, not Cassie, dickhead! Played by Stefan Gierasch from High Plains Drifter (1973) and Blue Sunshine (1977), Principal Morton just can’t seem to get Carrie’s name right. Forgetting once we can surely forgive, but four times in a row? No wonder our girl Carrie has a cranky telekinetic moment in response.

D is for De Palma

Although his feature debut was the 1968 experimental film Murder a la Mod, by the early 70s American filmmaker Brian De Palma had truly hit his stride with Carrie following hot on the heels of some of his best films. These include Sisters (1972), Phantom of the Paradise (1974), and Obsession, the latter released in the same year as Carrie only a few months earlier 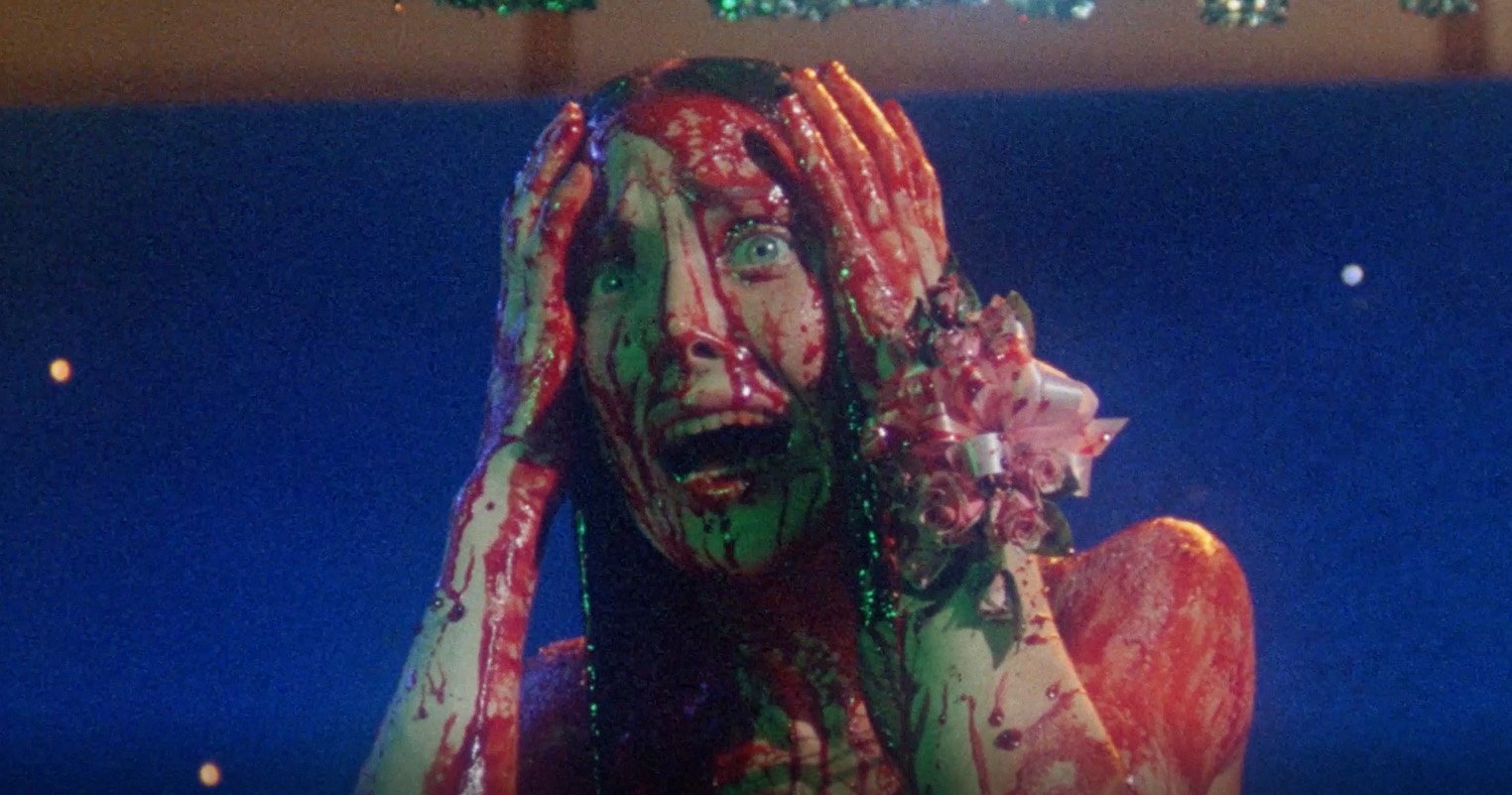 And you think you’re having a bad day?

E is for Election

Voting for prom queen should be a wholesome endeavour, but throw in the villainous Chris (Nancy Allen) who rigs the vote so she can set Carrie up in order to enact her nasty plan of vengeance and the stage is set for serious trouble

F is for Feminist Film Critics

The film from which Carol J. Clover launched the core argument at the heart of her foundational 1992 book Men, Women and Chain Saws: Gender in the Modern Horror Film, despite Clover’s defence it would be a mistake to assume all feminist critiques of Carrie historically were so kind. Far from. In 1977, Serafina Kent Bathrick claimed that with Carrie, De Palma had “developed his own brand of sexism” which demonstrates “an urgency in his desire to prove the impossibility of community among women”.

G is for Gym Class

It is here where the film begins, and here where we see Carrie get her first dose of the brutal bullying at the hands of her peers. She sucks at volleyball, so what?

H is for Humiliation

From school sport to English class, life for Carrie is a series of humiliations. Her mother’s desperate plea for her not to go to prom because “they’re all going to laugh at you” sadly comes to fruition, but Carrie has the last laugh (for a moment, at least).

I is for Invitation

An invitation to prom is still an invitation even if it’s born from guilt and pity, right? Sue (Amy Irving) begs her boyfriend Tommy (William Katt) to take Carrie to prom instead of her, trying to make amends for her disgraceful role in humiliating the frightened girl in the locker room scene at the start of the film.

J is for Jesus

Carrie just can’t seem to escape this guy. With his glowing eyes or distorted visage looking down at her from the framed picture hanging on the wall, here she finds not comfort and solace but rather an extension of her mother’s demented worldview.

K is for Key

One of the great unexplained mysteries of the film is the meaning of the key that Carrie wears in a necklace around her neck. Spacek has discussed a cut scene where the girl uses it to unlock a box of secret treasures hidden underneath her bed that includes photos of her father and Tommy.

L is for Library

One of the few moments of brief tranquillity and autonomy that Carrie finds is in the school library, researching her newly discovered skills. She lands on telekinesis, but it is curious to note the keyword that led her there: “miracle”. For Carrie, that is – at first at least – what she understood her supernatural abilities to be.

M is for Mother

The maternal urge as represented in Carrie is far from idyllic, the religious mania of her devout mother Margaret (Piper Laurie) providing the framework upon which a lifetime of terror, torture and abuse are predicated. But we see other kinds of mothering in the film, such as a more nurturing variant in the shape of Sue’s mum Eleanor, played by Amy Irving’s real life mother Priscilla Pointer.

N is for Norma

With her signature jaunty red cap, P.J Soles’ Norma may just be Chris’s bitchy sidekick in Carrie, but from her film debut here she would become a cult film icon of the 1970s, soon appearing in Halloween (1978) and Rock ‘n’ Roll High School (1979).

O is for Oppression

Whether it is a victim of long-term physical, emotional and psychological domestic violence at the hands of her mother or more public torture at school by both staff and students, the people who are meant to support Carrie are in fact the very forces that keep her downtrodden.

All roads lead to the prom…

P is for Prom

A teen ritual rarely even committed to film with such memorable effect, in Carrie all roads lead to prom, the evening that should have been the happiest night of the eponymous character’s life. Which it perhaps would have been, if it wasn’t for those meddling kids…

Q is for Quiet

We may not be conscious of it, but much of the force of Carrie hinges on a tension between sound and silence. Carrie herself in fact barely speaks in the film, marking those moments where she does find her voice highly significant. So notable is her speaking up on rare occasions that her English teacher Mr Fromm (Sydney Lassick) even mocks her when she calls Tommy’s poem “beautiful”.

R is for Remake

And there’s been quite a few. In 2002, cult horror darling Angela Bettis starred in a made-for-television version of King’s novel, followed in 2011 by a big screen adaptation directed by Kimberly Peirce, and starring Chloe Grace Moretz and Julianne Moore.

S is for Sissy Spacek

The casting of Sissy Spacek who was nominated for an Oscar for her performance as the film’s title character is the stuff of legend. Far from the original choice for the part, she auditioned with the encouragement of her husband, art director Jack Fisk who worked on Carrie and met Spacek when they had previously worked on Terrence Malick’s Badlands (1973) together.

T is for Telekinesis

From exploding locker room lightbulbs to shattering mirrors, the fledgling supernatural powers Carrie discovers early in the film develop with such velocity as to lie very much at the heart of the spectacular prom night massacre.

U is for United Artists

1976 was a slow year for United Artists to begin with, but that November, Carrie turned the tide. Following a month to the day after its release was a little film you might have heard of called Rocky, which together saw UA not only gain nominations for Carrie but it would win the coveted Best Picture award for the Stallone film, too.

V is for Vengeance

While we may think of Carrie as a revenge film specifically in terms of the title character using her telekinetic powers to get payback against all those she perceives as having wronged her, it is also Chris’s desire for vengeance against Carrie which leads her to the humiliating pig blood incident in the first place.

W is for William Katt

The son of Barbara Hale who played Della Street in Perry Mason, William Katt became a household name in the early-mid 80s for playing the title character in the smash TV series The Greatest American Hero. His performance as Tommy was an early feature film appearance for Katt, but for cult film fans, it remains an enduring one.

…where the pig blood lands. Splat!

Y is for Yelling

There is a lot of yelling in Carrie. Like, a lot. Again amplifying the comparative meekness of Carrie herself, this is a noisy film where people shout almost constantly whether they are playing sport, disciplining students, teasing peers or being slaughtered at the senior prom.

Z is for Richard Ziker

What would Carrie be without its unsung heroes, the stunt performers? Richard Ziker (more commonly credited as Dick Ziker) was not only the film’s stunt coordinator but, as luck would have it, his name also starts with a “Z”. And, according to IMDB, his impressive credits don’t end there, working in everything from Die Hard (1988) to Thelma and Louise (1991).