Once in a while, a film will become so influential that it will briefly change the landscape for a genre. Such was the case in the mid-1980s when the unstoppable Gremlins (1984) came onto the scene and it seemed as though films about devilish little creatures were as prolific as the titular Gremlins themselves, popping up at every available opportunity.

With adults unable to escape them in the cinema, kids were also getting in on the act with the craze continuing into the playground where Boglins, a goblin-themed hand puppet that bore a similarity to some of the monsters from the films of the time, were the must-have toy. For whatever reason, during this time period these ghastly looking creatures were in and we all wanted a part of them.

It was a short but hectic run for these movies. By the early 90s the poor little fellas were beginning to run out of steam as tastes began to change although in recent years a revival of sorts has begun with the likes of Chubbies, Ghastlies and Cute Little Buggers all attempting to pump life into the genre. With the recent release of the infamous Hobgoblins from cult B-Movie legend Rick Sloane now available to watch on ARROW, we’ve decided to give a chronological rundown on what these creatures got up to.

The first little creature picture out of the gate which in film releases is always a major advantage. Gremlins remains an iconic film that has firmly been wedged in the public consciousness since release and re-watched every year, losing little of it’s impact with new audiences.

Executively produced by Steven Spielberg but Joe Dante (The ‘Burbs, Matinee) at the directorial reins, the film is almost exactly what you would expect from that pairing – a homely, heart-warming tale yet darkly funny and nightmare inducing. It almost begins like a typical Spielberg film with a nice house in the suburbs and a cute little creature called Mogwai, in personality not a million miles away from E.T. Then the three golden rules of looking after little Mogwai are quickly broken, cocoons begin to form and the proverbial hits the fan.

Gremlins is one of the best examples of a hybrid genre with the film often being two things at the same time. Horror and comedy. The fully formed Gremlins are as terrifying as Mogwai is cute. They have a very serious threat from their murderous rampages yet they’re sedated by watching an old Disney film at the cinema. And let’s not forget whether you regard it as a Christmas film or not, Phoebe Cates’ Kate Beringer’s retelling of the chilling story of how she found out Santa Claus isn’t real is as far away from the spirit of your typical Christmas film that it’s likely to get. There’s a delicate balance being carried out here and it works like a charm.

Who would have thought something bad could happen as a result of hosting an occult ritual in the basement of your late dad’s house? Not Jonathan and his friends but sure enough, they’ve summoned the Ghoulies!

Well remembered for it’s marketing with the VHS cover featuring a Ghoulie appearing out of a toilet looking like a cross between an angry newborn baby and an unshelled turtle, Ghoulies was a victim of timing more than anything else. As director Luca Bercovici explains, they were in production at exactly the same time as Gremlins and despite the latter’s attempts to sue them from using the name, they would have been released at similar times if not for the production team of Ghoulies running out of money. As it is, Ghoulies has some similarities but has arguably more gross-out moments and less sentimentality as well as less chance of becoming a mainstream hit.

The Ghoulies would re-emerge three more times and not always via the lavatory. In Ghoulies II (1988) where, unrelated to the first film, the Ghoulies end up in a travelling funfair, Ghoulies III: Ghoulies Go To College (1991) which needs no further explanation and Ghoulies IV (1994) which sees lead actor Peter Liapis from the first film reprise his role as Jonathan, now a detective who has the unenviable task of hunting down (and there’s no other way of saying this) a new pair of Ghoulies.

We’ve had metamorphic pets and demonic monsters, now it’s time for aliens with the crash landing of Critters. Like with Ghoulies, according to director Stephen Herek Critters was both conceived and written long before Gremlins had even gone into production and rejected any idea of it being a clone or rip-off. Despite a similar premise of little creatures going beserk, Critters did offer something different and has been able to carve it’s own identity successfully enough to keep a franchise going.

In rural Kansas, the Critters crash down and cause havoc to a poor, unsuspecting family just trying to go about their lives on a farm. With an incessant hunger that leaves no man, woman or livestock in their wake, the Critters devour and kill with abandon displaying their adept and creative murdering abilities. With the alien twist, this film has more of a sci-fi element than the others on this list and at times feels like a neat homage to the monster flicks of the 50s.

Well-paced and entertaining fare, Critters pushed on to become arguably the most persistent creatures on our list. Not only have they gone on to feature in five films, the most recent being Critters Attack! in 2019, they’ve also had their own TV show Critters: A New Binge which was also released in the same year and lasted for a season. Who knows, there may still be life in them yet. 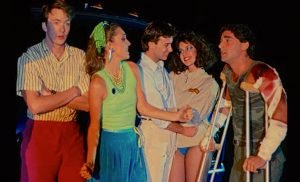 Crutches, fluorescent clothing and a 1000 yard stare – some of the side effects of encountering the Hobgoblins

Produced by the indie icon Roger Corman and directed by Tina Hirsch, a very successful editor (Death Race 2000, Dante’s Peak and indeed Gremlins) making her debut as director, Munchies is a creature movie that leans more into the comedy than the horror and that’s only if you like your comedy of the goofy, lowbrow variety.

Harvey Korman (Blazing Saddles, High Anxiety) is Simon Watterson, an archaeologist who uncovers a Munchie in Peru and brings him back to the US where his comedian wannabe son Paul, who surprisingly has the least comedic role in the film, is charged with looking after him. Before you know it, the Munchie now called Arnold, has been kidnapped by his uncle (also played by Korman) and soon begins to run amok and multiply. They quickly learn to speak English, drive a car and sexually harass nearly every woman they meet.

With direction from Gremlins editor Hirsch and starring role for Nadine Van der Velde from Critters, Munchies understandably feels as though it’s following in the quick, tiny footsteps of what’s come before. They certainly invite the comparisons with a lot of inside jokes, such as a Gizmo licence plate, but like most of the jokes in this film they tend to fall flat. The Munchies themselves are supposed to add to the hilarity but these annoying killer perverts with their junk-food eating, joy-riding ways are unlikely to crack anyone’s ribs. Although the creatures commit murder and arson among other crimes they never truly seem threatening and the twinkly twee music that plays whenever they appear indicates this could have easily started life as a kids film but swung in a very different direction.

Initially released in 1988 to little fanfare, Hobgoblins is a very low-budget take on the evil little creatures theme from independent film-maker Rick Sloane (Blood Theatre, Vice Academy). This time, the Hobgoblins live in the vault of a movie studio where an old security guard Mr McCreedy has been watching over them for 30 years until new employee Kevin accidentally sets them free. McCreedy explains these unusual beasts have the unique ability to make your fantasies come true but then kill you which leads Kevin and his lively group of pals into a bizarre dark world all of the Hobgoblins making. A more apparent telling of the careful-what-you-wish-for moral there has never been.

The film received a second lease of life in the late 90s after appearing in the much loved cult show Mystery Science Theater 3000 where Mike, Tom Servo and Crow added their comedic commentary much to the delight of Sloane who actually submitted his film to the MST3K team. It’s a perfect film for group viewings with a number of unforgettable stand-out moments such as the sleazy goings-on in Club Scum, the remarkable physics of an exploding grenade and the longest fight with garden tools you’ll ever see in the history of cinema. The hairy, grinning Hobgoblins are unlikely to strike the fear of God in you but you’ll definitely remember them.

It’s fitting that the film that started them off also rounded off the decade with it’s sequel, Gremlins 2: The New Batch, putting a full stop on the popularity of the creature craze. Like with most trends, this could be cyclical too and with the release of a new Gremlins TV show in 2021, it’s not too strange to think we could see more of their ilk sometime soon. Be careful what you wish for…

Hobgoblins is currently available to watch on ARROW as part of the Rick Sloane Collection Vol 1. including Blood Theatre, The Visitants and Vice Academy 1, 2 and 3.