Was it your intention to make a film that touches on mental health issues or did it happen organically through the subject matter?

It was definitely my intention to talk about mental health, but some of the ways in which we did so happened organically through the process of collaboration. I wrote the initial screenplay on my own, and one of my goals from the very start was to convey my experience of depression, which is far less overt and dramatic than it’s usually presented in film. Too often, I think people think depression is profound sadness, whereas my experience, and that of too many people I know, is an existential exhaustion and hopelessness. It’s wallpaper that convinces you that you’re unworthy of walls, or that there’s no point to having walls in the first place. Then I gave the script to everyone who worked on the film and invited them to bring their insecurities and neuroses and use the world of the story to explore whatever they wanted to explore.

There are running themes of detachment and loneliness in A Ghost Waits, not only through Jack’s literal isolation but the other worldly aspect of Muriel’s existence. Do you feel having a shared goal can break people from a trap of loneliness?

I’m a big believer in propinquity, yeah. A shared goal is a functional, subtle reminder that we are not alone. Even if we feel that we’re alone, the constant proximity to another person has the effect of undercutting that feeling and also engendering in that other person empathy for you, and possibly curiosity as to your emotional health. At which point they’re basically a friend! 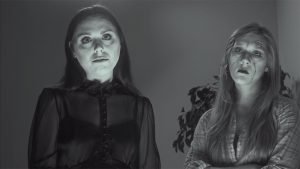 We see a marked difference between how Jack behaves on his own and when he’s around others. Do you think expectations of others moderates our behaviour and in Jack’s case, have an effect on his mental health?

In my experience, others’ expectations are helpful because once you’re familiar with them it becomes a lot easier to mask your struggle. I’ve never figured out how to mask from myself, though I’ve spent so much time trying to. I have begged my stupid brain to forget things, but my stupid brain refuses to play along. Of course, that masking only serves to deepen and widen the gap between you and them. And the loathing one can have for their own brain can lead to dissociation, which isn’t the best way to spend a weekend…If you’re genuinely trying to work through everything without masking, then expectations can be helpful in setting goals and marking growth.

For example, the back half of my 20s was spent in a profound depression. Many Sundays were spent entirely in bed, because if I got out of bed it meant the day counted. Cut to a few years later, I’m living in Los Angeles and working for Creative Screenwriting Magazine. One issue in particular, I had a lot of articles and was working constantly to make deadline. One Saturday night, it’s 1:30am and I’m struggling to keep my eyes open, so I put work down and set my alarm for 5:00am. Alarm goes off, I get out of bed and make coffee, and while I’m waiting for it to brew, I thought back to those Sundays spent in bed. And I thought how nice it was to not even have the option to do that anymore. Because I had to make deadline.

I think the fact of other people being nearby reminds him of his hope for connection. When no one’s around, I think it’s easy for Jack to feel completely adrift and bereft of hope; but then all he needs is a pizza delivery guy to show up to remember that other people exist and as long as that’s the case then hope springs eternal. Not that he’d use those words.

There’s a really nice ambivalence in A Ghost Waits where in scenes it can be sombre, you also find a way to be comedic. How important was adding elements of humour to your story?

It was huge! Any time MacLeod and I found place in the story where we could have some fun, we seized the opportunity. Especially knowing we were treading some serious ground, we didn’t want it to be a slog. I remember seeing Mrs Doubtfire in the theatre when it was released, and realising that if you can make people laugh, they’ll drop their guard and the sentiment of the piece can hit home so much harder. So part of it is me wanting the audience to enjoy the experience of watching the movie, and part of it is me wanting to devastate people as much as I can.

The ending of A Ghost Waits is likely to provoke a strong reaction in the audience. What kind of responses have you received about it?

It’s interesting, because there have been a few people who worry that the ending is romanticising a societal taboo, but it’s always “I don’t struggle with this but I worry about those who do.” Meanwhile, the response from people who do struggle with it have universally expressed their gratitude for the film making them feel seen and heard. In one case, at the FrightFest Glasgow screening, a man told me that he’s excited to watch it with his partner because it will facilitate a conversation they’ve never been able to fully have. I would never seek to diminish anyone’s loss and grief, but this isn’t for the people who have lost someone – it’s for the people we’ve lost. We never really talk about the taboo in question, and if anyone ever brings it up they are quickly shouted down with “But no one should do that!” I wish people knew how hard it is to trust someone enough to discuss this, and when someone trusts you that much, you should just listen and not prescribe.

In recent years, discussions around mental health and encouraging people to open up about their experiences have become increasingly common. Why do you think this is?

I think really people realised that the only way to chip away at a stigma is to talk openly about their struggle. It certainly isn’t fun to talk about, but it feels so good to get some of that weight off of your shoulders. And that good feeling makes you want to discuss it further and get even more weight off your shoulders, and hopefully in doing so someone else will be inspired to talk and reduce the burden they’ve been carrying around. It all really comes back to the fact that we’re all in this together, and you can either be a force for good or a force for harm. I’ve never regretted taking a moment and considering my actions in order to make sure I act with kindness, whereas I frequently regret the moments when I’m overwhelmed and don’t take that breath. 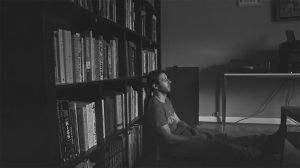 Jack (MacLeod Andrews) takes a break in A Ghost Waits (2020)

Do you feel filmmakers have a responsibility to represent mental health issues authentically?

I’d say even more important than representing them authentically, filmmakers need to work to represent them respectfully. I don’t think you necessarily need to have lived a story to be able to tell it, but you MUST be respectful of those who do or did live it. Listen to them, and be willing to rethink how you’re telling your story if need be. Also, specifically in terms of mental health, the struggle can feel very nebulous. I think it’s hard for people who don’t live with it to capture it, but I mean hell I live with it and it’s hard for me to capture it most of the time. I’ve spent my entire life trying to understand and articulate what the hell is going on in my head. I do feel like I finally have a grasp on things, but it’s still day-to-day. All you can really do is let the moment be the moment.

Do you think mainstream cinema does a good job of portraying mental health issues?

No. The storytelling in mainstream cinema requires too much closure to really show the above-mentioned nebulousness. Maybe part of that is the move towards more blockbuster-based storytelling in the mainstream, but the fact of mental health is right now you’re okay, and then you’re not, and then you’re okay again, and that’s hard to represent in a way that begets sequels and corporate synergy.

Has there ever been a film or a moment in a film that you felt particularly captured a feeling of anxiety or depression that you yourself have felt?

The scene that immediately jumps to mind is Dani screaming with the women in Midsommar. That sort of radical empathy speaks so deeply to how it feels when you find your tribe and feel comfortable and empowered to fully be yourself and feel what you feel.

A Ghost Waits is available on Blu-ray and ARROW.

Why we still talk about Audition