-The Glove “Mouth to Mouth”

It’s a moonless, starry night as you approach the theatre. It’s one of those large structures of former gilded antiquity that has somehow survived past wars, chaotic economics, and the sterile-fast-food chains masquerading as movie multiplexes. (After all, survival is the closest thing anyone can get to winning in this life.) Inside, the lobby walls are decorated with huge posters sporting intricate and colorful illustrations of beautiful crimson-haired women, bare-breasted vampiresses, shadowy figures, and hauntingly decadent men. Behind you, someone mutters the name of “Philippe Druillet,” as the illustrator of these art-deco-meets-eros-macabre posters.

If the show fulfills even a portion of the painted, printed promises before you, then this is going to be one helluva phantasmagoric night.

As you enter the crimson heart of the theatre, the stage looms large in presence as everyone takes their seats. The lights dimly fade as a heavy mist starts to enter the quiet as a forgotten grave arena. Masculine footsteps can be heard on the floorboards as lights shaded red, green, and blue reveal the figure. A man with short dark hair that is starting to thin ever so slightly has appeared. His light eyes and gaze possess a mixture of innocence and untouchable observer. This magician waves his pale hand as the towering screen behind him lights up and displays image after image of a world that is as expansive as it is singular and as enchanting as it is haunting. It is soon very apparent that our magician is more than just a slight-of-hand weaver-of-worlds but is the creator of the holiest-unholy moving visuals that play before us. His name?

In the annals of the cult genre cinema, Jean Rollin created his own film landscape that was and remains his very own little universe. So much of his work plays out like the living embodiment of every possible definition of the fantastic. From, to quote Webster’s, “based on fantasy” to “so extreme as to challenge belief,” Rollin’s creative thumbprint is one that opened up a wholly fresh way to explore the full “fantastique” potential within genre cinema. Rollin is an artist, magician, storyteller, poet, and full-on heart-bringer whose pulse, vision, and love of the gothic, the mysterious, and supernatural. 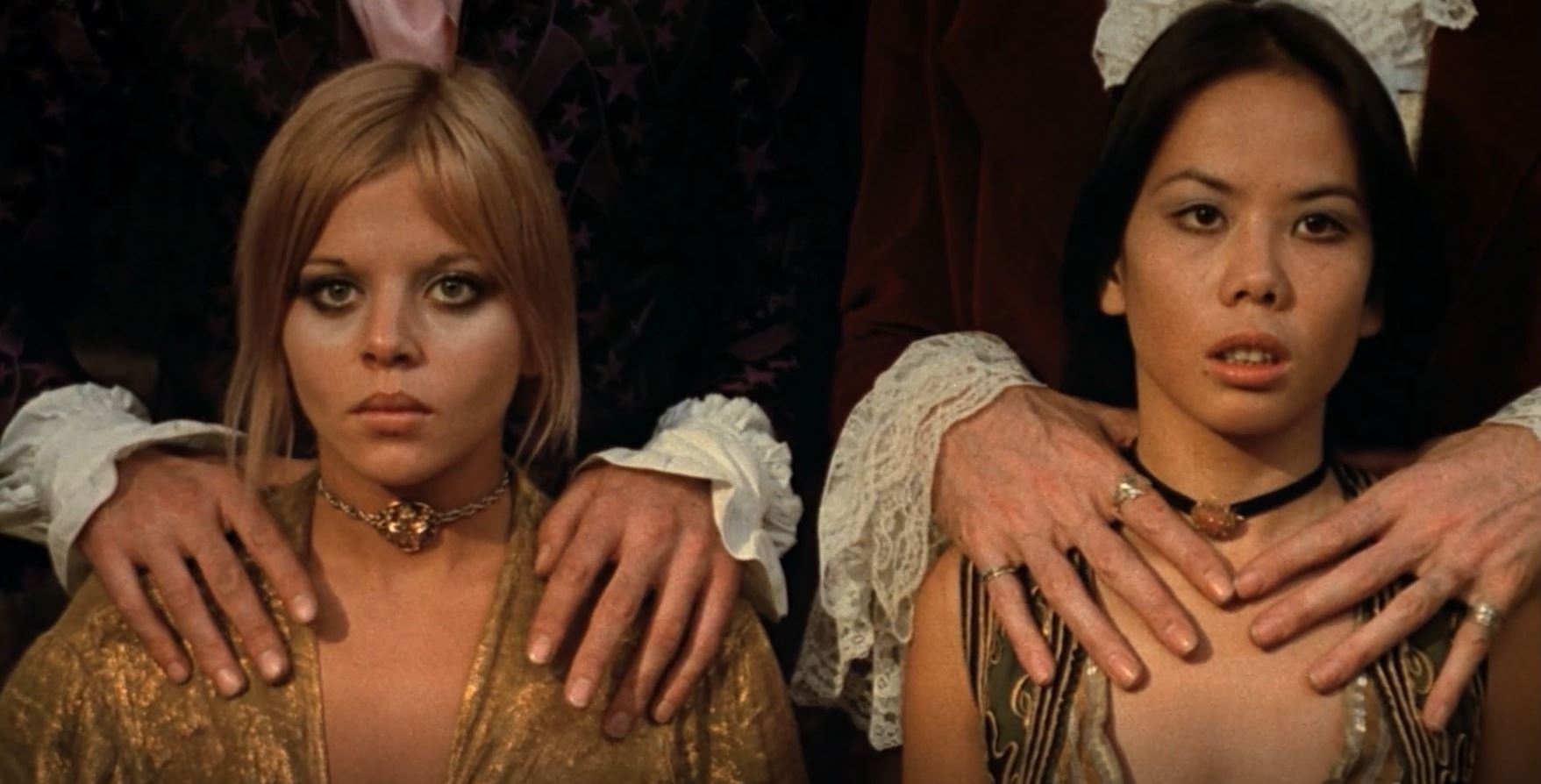 Like any true blue auteur, Rollins’ work has recurring themes, some even dating all the way back to his first short film, 1958’s The Yellow Lovers, which he helmed at the tender age of just twenty years old. Here, it is the early appearance of the ocean via the shores of the commune of Dieppe, France. The desolation and beauty of this beach as the North Atlantic Ocean sways and expands like an ever-hungry mouth ready to swallow any and all that slips into its realm whole. This evocative geographic stretch would go on to play a part in Rollin’s The Rape of the Vampire (1968), The Nude Vampire (1970), The Shiver of the Vampires (1971), The Iron Rose (1973), Lips of Blood (1975), and many more.

The twin locales of classic gothic imagery, the graveyard and the castle, also make consistent appearances throughout Rollin’s work. But in lieu of the brainless and heartless flesh-hungry living-dead and stock-character-fanged-villains emerging from such exquisitely decayed locations, Rollin created characters whose visual impact is often matched by their emotional impact. In The Nude Vampire, you have a childlike woman being restrained and manipulated by scientists due to her unique biology of possessing eternal life. The clan of vampire-esque family figures, from children to adults and led by the charismatic Michel Delahaye, rally together to try and save one of their own. The concept of vampires as a family of misfits versus sensual predator evil was incredibly new in the 1960s and 70s, yet here was Rollin, giving not only the expected beauty and blood-tinged-sexuality to these creatures but also firm dignity.

In fact, Delahaye, along with Jacques Robiolles (who made an uncredited appearance in The Nude Vampire), both appear as the two eccentric, sanguine uncles in Shiver of the Vampires, who welcome back their now-adult niece with open arms and capes. In the dynasty vein, twins, both metaphorical and literal, often populate the Rollin cinematic landscape. With the former, there were the beautifully striking Castel twins, Marie-Pierre (aka Pony) and Catherine, who first appeared together in Nude Vampire as mute female servants outfitted with various straps of metal, spikes, and leather. Marie-Pierre would also appear as the blonde anima-animus to a dark-haired sister/lover-proxy in Requiem for a Vampire (1972), as well as Shiver of the Vampires. Even in Rollin’s sexploitation-crime-caper, the inexplicably titled Schoolgirl Hitchhikers (1973), the two female protagonists are blonde and brunette, though are more intimately familiar than familial.

Eva (Brigitte Lahaie) with scythe in hand in Fascination (1979)

Schoolgirl Hitchhikers, which sported neither schoolgirls nor proper hitchhikers, may feel like an outlier compared to Rollin’s horror output, it does highlight something special about the man’s directorial touch. Unlike a number of directors in the 1970s that consistently explored themes of eros, especially feminine sexuality, Rollin’s work never feels like an unwanted peek into someone’s one-handed-id. His heart lies as much, if not even more so, with his heroines as it does with his “monsters.” His approach connects ardor with tangible respect, even when they end up in truly violent circumstances, it’s more on the nerve-racking end of titillation. (Especially poor Marie-Pierre’s chained-nude-whipping from the hands of her best friend in Requiem.)

We may have lost Jean Michel Rollin Roth Le Gentil the man back in December 2010 from cancer, but thanks to companies like Arrow, we still have Jean Rollin the director, dream, magic-maker, poet, and maestro of the fantastic. Every single work that this man’s mind, heart, and hands touched is one that contains a multitude of expressive rewards and jewel-like shadows. So many of his characters, from whip-wielding vampire acolytes to bohemian dandy “oncles” to ill-fated lovers nude on that lonely Dieppe coast, will imprint themselves upon your mind’s eye long after the films themselves have ended. What a truly blessed motley crew of cult film-loving cineastes to have access to such an artist as Jean Rollin.

Jean Rollin: The Fantastique Collection Part I and Part II are available to stream on ARROW.

Heather Drain is a US Southern-based writer of film, music, esoteric culture, and prose writer. She has written for numerous publications and websites over the years, including Diabolique, Rue Morgue, Soledad, Dangerous Minds, Video Watchdog, and more.

Ju-on: The Curse and four other Y2K J-Horror movies…

So Many Legs, So Much Meaning: An Introduction to…