There are a lot of teen comedies from the 1980s that have been lost to the VHS clearance bin of time, but none of them were directed by John Hughes. The National Lampoon vet has become synonymous with ‘80s teen comedies thanks to the success of films like The Breakfast Club, Sixteen Candles, and Ferris Bueller’s Day Off. In the middle of that mid-‘80s run, Hughes directed arguably his strangest comedy, a hybrid of early ‘50s sci-fi comics, ‘80s sex comedies like Porky’s, and the set-up of Mary Shelley’s Frankenstein. At first, history kind of pushed Weird Science aside, deeming it a lesser Hughes film, but it has sustained a loyal fan base for multiple reasons, even leading to a successful cable TV series and multiple special edition home releases. Why do people keep going back to Weird Science?

Of course, it helps that the film fits snugly in the legacy of a beloved director. Few filmmakers took pop culture by storm with the same force as Hughes did in the mid-‘80s when his first three films were released in the span of 18 months. Sixteen Candles had been a hit for the filmmaker in May 1984, and he followed that up with The Breakfast Club in February 1985 and Weird Science in October of that same year. All three films starred Anthony Michael Hall, whose ascendance to household name status was partnered with Hughes (so much so that he turned down returning for National Lampoon’s European Vacation to keep working with the director). Having Hall as the face of the Hughes empire certainly helped build the reputation of Weird Science, but it was the clever premise, relatable heroes, and sly gender politics that has allowed it to sustain.

Hall plays Gary Wallace, best bud of the equally awkward Wyatt Donnelly (Ilan Mitchell-Smith). The pair are social outcasts at their suburban high school—Hughes set the film in the fictional Shermer, IL (also the setting of Sixteen Candles), a riff on the real former name of his hometown Northbrook, IL: Shermerville. One of Hughes’s greatest gifts was to capture the relatable life of the suburban Midwest, where great drama could go down in the mall food court or at a house party down the block. No one lived in Shermer, but everyone felt like they knew Shermer.

A generation related to not just the setting but the people who lived there. Millions of young men understood the plight of Gary and Wyatt more than their tormentors, popular bullies Ian (Robert Downey Jr.) and Max (Robert Rusler). They too dreamed of hooking up with the most attractive girls at school—in this case, Suzanne Snyder’s Deb and Judie Aronson’s Hilly. Hughes takes this relatability and turns it into wish fulfillment before pushing the whole thing into a hero’s journey. Imagine if the dating game could be solved by using the brain that gets you called a nerd in gym class. Imagine if you could create a dream woman instead of having to navigate the nightmare halls of high school to find one. 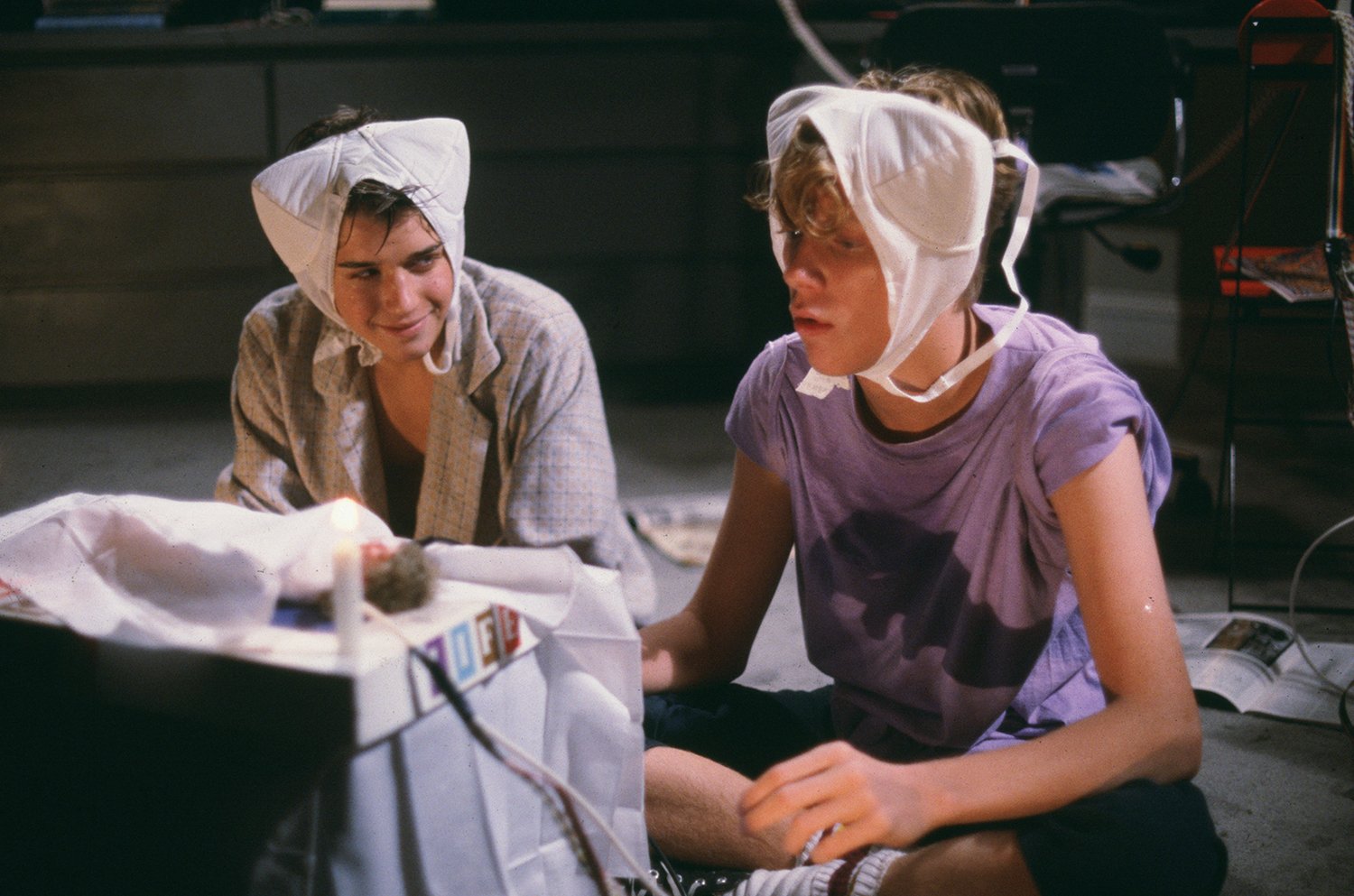 That’s exactly what Gary and Wyatt do, using the latter’s computer to design Lisa (model Kelly LeBrock, taking over for actress Kelly Emberg, who left the project after only a few days of filming), who comes to life after the boys hack a government computer and create the impossible. At first, Lisa is merely the realization of a horny teen imagination, but Hughes smartly gives her character more agency than that, using her as a device not just to get his teen heroes laid but to give them what they truly lacked all along: confidence. Yes, on the surface, Weird Science is a movie about creating a gorgeous woman out of thin air, which inherently makes it a bit problematic in its design, but it has sustained because of where Hughes and his cast take that concept. Lisa could have been mere supermodel arm candy for Wyatt and Gary, but her quest to make these boys into men hinges on teaching them to stand up for themselves, whether it’s throwing the ultimate party or confronting Wyatt’s awful older brother Chet (Bill Paxton).

It’s simply not the sex farce that it could have been in the hands of a lesser filmmaker, as Hughes uses his concept to tell a story of unexpected heroism. LeBrock understood this, telling SlashFilm, “John was a genius at comic relief, family situations, and geeks getting the girl. And it allows all of us humans who are insecure — and most of us are — to feel like a hero. That’s the beauty of the fantasy of the film, it’s that these boys who didn’t stand a chance with the girls, actually get to be heroes and everyone loves to see the fallen person land on their feet.”

Like a lot of ‘80s teen comedies, Weird Science climaxes at a house party, but this one is allowed to be, well, weirder than most films. Chet is turned into a talking turd; Ian & Max end up accidentally forcing the guys to create a ballistic missile; renegade mutant bikers show up like they drove there straight from a Mad Max movie (in fact, one of them, played by Vernon Wells, cut a similar figure when he wore nearly the same costume in Mad Max 2: The Road Warrior). Hughes understood that his Frankenstein riff needed to be a bit freaky to be memorable. After all, if you’re going to make a movie about teenage boys creating a literal human being, why not get a little crazy? 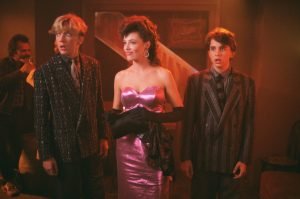 Gary and Wyatt find hanging around with Lisa (Kelly LeBrock) does wonders for their social life.

The initial response to Weird Science was more of a shoulder shrug than the first two films in John Hughes’s career. Janet Maslin of The New York Times was not a fan, writing “There are enough moviegoing 14-year-old boys to make a hit out of ”Weird Science,” of course, but for the rest of the population, its pandering is strenuous enough to be cause for alarm.” However, Roger Ebert saw the value in Weird Science earlier than most critics, calling it “…funnier, and a little deeper, than the predictable story it might have been.” (For the record, Siskel hated it.)

The VHS era and the continued ascendance of Hughes and stars Hall and Downey Jr. (who both joined the cast of Saturday Night Live mere months after the release of the film) helped Weird Science stay popular. As the sci-fi/comedy hybrid continued to thrive, the movie even became a TV series on the USA Network, which ran from 1994 to 1998, notching almost 100 episodes. Rumors of remakes have persisted over the years, gaining the most traction in 2013 when it looked like Joel Silver, who produced the original, would fund a modern take on the flick.

When John Hughes passed away in 2008, Roger Ebert wrote about his career, saying, “He took teenagers seriously, and his films are distinctive for showing them as individuals with real hopes, ambitions, problems and behavior.” This is obviously true in grounded character-driven comedies like Sixteen Candles, but it’s a factor in why people still watch Weird Science too. It’s powerful when a teenager feels like a movie understands them. One might even say there’s a science to it.

The Future is Now: How Children of Men Saw it Coming