The giallo film genre is older than Dario Argento, but he remains its godfather, the filmmaker most associate with the Italian horror explosion of the 1970s. Mario Bava’s 1963 film The Girl Who Knew Too Much is often credited as the first giallo, but it was Dario Argento’s The Bird with the Crystal Plumage (now available from Arrow on UHD) seven years later in 1970 that altered the landscape in ways that the horror genre is still reflecting more than a half-century later. Loosely based on Frederic Brown’s novel Screaming Mimi (which had been adapted into a film with Anita Ekberg in 1958), Argento’s directorial debut launched the filmmaker’s obsession with the themes and defined the style that would make the giallo one of the most essential genres of the 1970s. Violence, sex, voyeurism, the fallibility of perception, obsession—all of the themes that would work their way through Argento’s filmography and influence fellow giallo filmmakers are here in his first film. Argento and his crucial collaborators like cinematographer Vittorio Storaro and composer Ennio Morricone couldn’t have known how far this bird would fly.

The male-centered giallo—and there are notable differences in the genre depending on the gender of the protagonist—often feels like a descendant of the noir, wherein shadows have been replaced by splashes of color, often blood red. Like so many noirs and so many future giallo films, The Bird with the Crystal Plumage centers the plight of a man in the wrong place at the wrong time. In this case, it’s Sam Dalmas (Tony Musante), an American writer in Rome with his girlfriend Julia (Suzy Kendall). One night, on his way back to his flat, he spots a crime taking place in an art gallery. As Sam tries to come to the rescue of the person he thinks is being attacked, he basically gets stuck between the doors, unable to get to the bleeding woman in white. She’s behind a pane of glass rectangularly shaped like the movie screen itself. He is as unable to get to her as a movie goer in the audience, a witness to violence who can’t stop it or help its victim even as she reaches out her bloody hand. 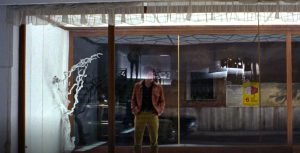 Scene from The Bird with the Crystal Plumage (1970)

After initially becoming a suspect himself, Sam is increasingly obsessed with trying to decipher what he saw on that violent night, digging into a string of similar murders. He becomes the audience surrogate, questioning what he saw in the same way that an audience member should question the images up on the screen. What did he miss? What did we miss? In an eventual common trait of the giallo, the hero ends up both a suspect, at least initially, and a target. Giallo is often about average people who are thrust into worlds of violence and Sam Dalmas is a typical genre protagonist, someone whose safety is threatened by what he’s seen even as he can’t quite comprehend exactly what he witnessed. In giallo, plunges into violent worlds are sudden—Sam doesn’t ask to be a crucial part of this case, but he has no choice once he opens that door.

The Bird with the Crystal Plumage contains early versions of so many of the elements that would define Argento’s work and influence the giallo genre as a whole. From the early shot of a glistening knife wiped across a piece of red fabric, Argento uses bright colors to accentuate violent acts or increase tension. In one of the film’s cleverest uses of color, Sam chases a man in a yellow jacket and blue cap into a room that he discovers is crowded with men in the same yellow outfit. After all, giallo is Italian for yellow (the name comes from the common color cover of the pulp novels of the genre). He’s announcing this film as a new standard for the genre.

The images of a shining knife or a splash of spurting blood that are so often associated with giallo masters are here in Argento’s first film, but those are just the obvious superficial connections that imitators would copy to varying degrees of success. More importantly, he’s setting the template in terms of craft decisions with visionaries Storaro and Morricone. When the tension rises, Storaro zooms in on furtive eyes, often tilting his camera when violence erupts, destroying the very axis of the action to amplify its intensity. A quick flash of a switchblade, a canted view of the blood on the ground—it’s how people like Argento and Storaro capture sudden violence that shaped horror as much as the act itself. And the film doesn’t work without Morricone’s unsettling, repetitious score. Using intense compositions to make upsetting sequences even more chaotic would become essential to Argento’s work, particularly in the way he would use Goblin in his masterpieces Deep Red and Suspiria.

Argento’s classic giallo continues to be a major influence

Argento’s debut may not be as violent or sexual as his work would become, but it unmistakably defined his style and thematic interests. The fallibility of perception, a major aspect of Sam’s experience here, works its way through a lot of his future films, as does the influence of art. In Bird with the Crystal Plumage, Sam finds a painting that appears to have inspired the serial killer, and it’s telling that the fact that he’s being chased by a serial killer breaks him out of his writers block—violence inspires creativity. Argento doesn’t so much comment on the influence of art on real-life violence in his gialli as much as he often intertwines the two, forcing audience members to be voyeurs of violent acts and then asking us to interpret them in the same manner Sam tries to decipher what he’s seen in Bird or Argento’s protagonists in films like The Cat O’ Nine Tails, Four Flies on Grey Velvet, and Deep Red are forced to try and unpack what they’ve experienced, often not just to solve a case but to save their own lives.

The Bird with the Crystal Plumage has drawn comparisons to Alfred Hitchcock’s Psycho (which may have actually been inspired at least in part by the inciting incident in the film version of Screaming Mimi, creating a perfect circle of sorts), and there are undeniable parallels, especially in the final act reveals, but Argento did what so many great artists do in taking his inspirations and filtering them through a fresh perspective to own them. Hitchcock, Christie, Poe, Antonioni – one can see all of them in Crystal Plumage, but it’s more exciting to consider the legacy it would leave than the ones from which it was born. Argento’s style is still influencing pop culture over 50 years after his debut, evident in so much modern horror across television, film, and even video games. It all started when an ordinary guy saw something he couldn’t believe he was seeing. And, like us, he couldn’t look away.

Why we still talk about Audition