“The explosion of galaxies is violent. A comet falling on Jupiter making seven different holes is violent. The birth of a child is very violent…Life is violent, the circulation of blood, the heart beating, all is violent. But there are two types of violence – creative and destructive. I am creating art.” Alejandro Jodorowsky

It’s often quite easy to accuse certain directors of spending too much time on planet pretension. David Lynch remains in a low but still distant orbit, Ken Russell sometimes crash-landed there and Derek Jarman seemed to be working out how he could terraform it and live there forever. But one such artist probably does more than others to divide film fans and critics alike with his odd, slightly offensive and completely unabashed trips into the cinematic unreal.

Writer, producer, director, playwright poet, composer and self-professed ‘spiritual guru’, Alejandro Jodorowsky is perhaps almost as prolific as he is enigmatic. Exuding an air which is oddly down-to-earth yet strangely Merlin-esque, he is the embodiment of the modern renaissance man. The Chilean/French creative, like England’s Alan Moore, seems to exist in a magical netherworld of his construction. Though his movies are unquestionably distorted reflections of our reality, his unique visions can hardly be called run-of-the-mill social commentaries. His obsession with religious cults and the bashing together of Christian iconography with more eastern philosophies as well as his disturbing fetishistic penchant for limbless or deformed bodies, usually played by actors with actual disabilities, makes his work challenging and sometimes oppressively stylistic.

However, his movies are also staggeringly original, beautiful and rammed to the gills with mesmerizing scenes of kaleidoscopic symbolism and breath-taking scale and wonderment. His philosophy, when it comes to filmmaking is fairly simple – remain as in control as you can be, rely not on studios or money men but embrace the un-interfered-with-concept as often as possible. 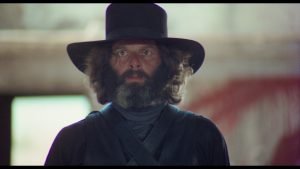 His early work is certainly a testament to this. Best known for his underground acid-western El Topo (1970), which examined our futile search for some kind of truth in an ever-confusing world state, the film, at the time, mostly only shown in specialist art centres instead of traditional movie theatres became synonymous a sort of shocking arthouse aesthetic. Part midnight feature, part spiritual exploration, like his later productions it was an unending stream of jarring, but alluring imagery wrought with hints of mysticism and psychomagic dropped into a sprawling chaotic landscape. El Topo (The Mole) follows the journey of the protagonist as he emerges from the dark (an ignorant state) to seek out some kind of enlightenment. Of course, it’s fruitless and the tale becomes one of fragmented moments and visually arresting chapter points. His cast of characters, in this broken quest, become no more than grotesques and expressionistic statements placed carefully and meticulously within the ravages of Jodorowsky’s non-story. It’s a spiritual journey, sure, but it’s one decorated by the desert and desperation, essentially, it’s a freak show in the midst of an existential crisis.

It would lay the groundwork for other efforts in which he would circumnavigate similar themes and subject matter. The Holy Mountain (1973) his unsurprisingly much-misunderstood delve into yet more metaphysical territory expanded the ideas which he had introduced in El Topo into a confusing but fabulously phantasmagorical feature which explodes with colour, magic and so-called blasphemous viewpoints.

Based partly on Ascent of Mount Carmel by John of the Cross, Jodorowsky passed a week without sleep under the tutelage of a Japanese Zen Master to best prepare himself for the unusual film he was about to create. Not only this, his central cast would spend months undertaking spiritual guidance and training at the Africa School with Bolivian philosopher Oscar Ichazo. This ‘preparation’ would place his actors and himself into the abnormal mindset they would need to fully do justice to the concept at hand. But quite what that concept truly entailed is anyone’s guess. 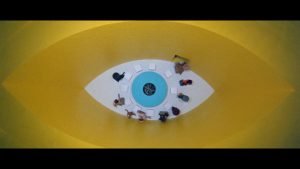 At the beginning of the film, a Jesus-style figure, who like El Topo is in search of answers, tumbles into the world of a select and maniacal cult. Partly an attack on organised religion it features many scenes which belittle not the teachings of Christianity, but how the church bastardises, sells off, or seeks power all in the name of God. Bishops, the holy Crucifix and the fakery attached to evangelism are all mercilessly battered here or at least made to look ludicrously superficial. As if to hammer home the point at one stage papier-mâché icons of Christ get churned out endlessly only to end up on a scrapheap of their own making as broken and pointless pieces of refuge. In another, one of the characters sees his shit turned to gold. It’s a strikingly ridiculous image that both mocks the alchemic leanings of Christianity with its water into wine teachings and also hovers around more spiritual conceptions.

With sets designed by Jodorowsky himself and utilising workers and locals for his background artists, the movie is bigger in scope and imagination than even its predecessor. Once described by the director as a piece of art which would only be understood thirty years later, The Holy Mountain is less a narrative and more a collection of ever more surreal non-sequiturs. The religious and spiritual allegory is heaped on in cement mixer loads of messed-up visual gymnastics. At its best, it’s a collision course of mind-numbingly gloriously set pieces making brilliant use of actors, costuming and exquisite composition. At its worst, it can become an unfathomable puzzle, a journey which takes us nowhere and everywhere often at the same time.

Though for some, Jodorowsky is only famous for Dune a project which never came to fruition with the failed production’s backstory now passing into legend, for others he will undoubtedly be remembered for his stunning tale of ‘dread’ and circuses, Santa Sangre (1989). Weaving in nods to Psycho (1960) and a host of other material such as The Invisible Man (1932), Jodorowsky built on the foundations of directors like Hitchcock, presenting us with a violent Giallo-style feature (it was indeed co-written and produced by Claudio Argento, Dario’s younger brother) given a metaphysical overhaul. Where Norman Bates in Psycho had adopted the identity of his elder parent, here, protagonist Fenix becomes an actual physical part of his mother Concha. After Concha, part of an insane religious cult which worships an armless martyr, also loses her upper limbs, Fenix is forced to act as her missing body parts and they become disturbingly linked both in a fleshly, sexual and abusive emotional entanglement. 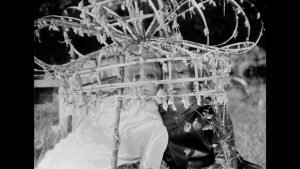 But what makes Santa Sangre most memorable is not just Jodorowsky’s custom brand of colourful and brutal set pieces, it is also a master class in the use of subversive symbolism. And again, it leans in heavily on the critique of organised religion. In this world, the church, the circus and a barmy cult are treated with the same amounts of ridicule and seriousness. To Jodorowsky, the pulpit deserves no more respect than the big top. Jugglers, fire breathers and tattooed ladies mingle with zealous cult leaders and catholic officials. Everything merges into a bizarre and terrifying form of entertainment. Mixing the serial killer premise with something even darker and threatening by taking us into the off-kilter mindset of the troubled anti-hero makes Santa Sangre the kind of horror film, which delves deeper than most.

The blood of the title could refer not only to an ancient Mexican past with its history of Aztec human sacrifice but also to the violence inherent in the subtext. Not only does Jodorowsky show us that the transition from child to adult is often one of great pain and change he also equates sex and sexual acts with injury and death. During one such adulterous indiscretion, we intercut from male and female coitus to the slow death of a circus elephant which bleeds heavily from its trunk. Though arguably more coherent than El Topo or The Holy Mountain, it is still a unique piece of filmmaking nonetheless, acting as a troubled and wholly original standard-bearer in the desolation of a dying decade which was fast running out of ideas.

Love or hate the work of Jodorowsky, and it’s easy to see how both emotions could be applied to a film like El Topo, there is simply no other director like him. His artistry, for there, is no other way to describe it, for his films often transcend the tiny confines of the Hollywood-style feature film. Exuberant, important, ridiculous, terrifying and at times wildly inappropriate, like other outlying creatives, he is the necessary alternative to what is often too vapidly and unoriginally ordinary.