Heavy is the head that wears the crown – or the head that used to. Despite being one of the most influential and iconic characters in cinema history, old King Kong has never quite gotten the hold of the whole “franchise” thing. Where once he held the title and crown of King, Kong has almost universally been usurped in the public consciousness as cinema’s alpha monster by his nearest rival, Godzilla (so much so that his most recent theatrical appearances drop the “King” altogether).

While monstrous contemporaries like his usurper and Gamera have inspired prolonged cinematic odysseys – so such an extent that their respective franchise are categorised into sub-series and movements of their own – the fallen king has never had quite so much luck. A king as significant and lauded as Kong, however, will always inspire B-grade imitators and pretenders to the throne, with pseudo-Kongs and would-be kings running rampant in exploitation cinema the world over.

From Bangladesh to London, and Hong Kong’s iconic Shaw Brothers Studio, welcome to the weird, wild world of “Kongsploitation”. 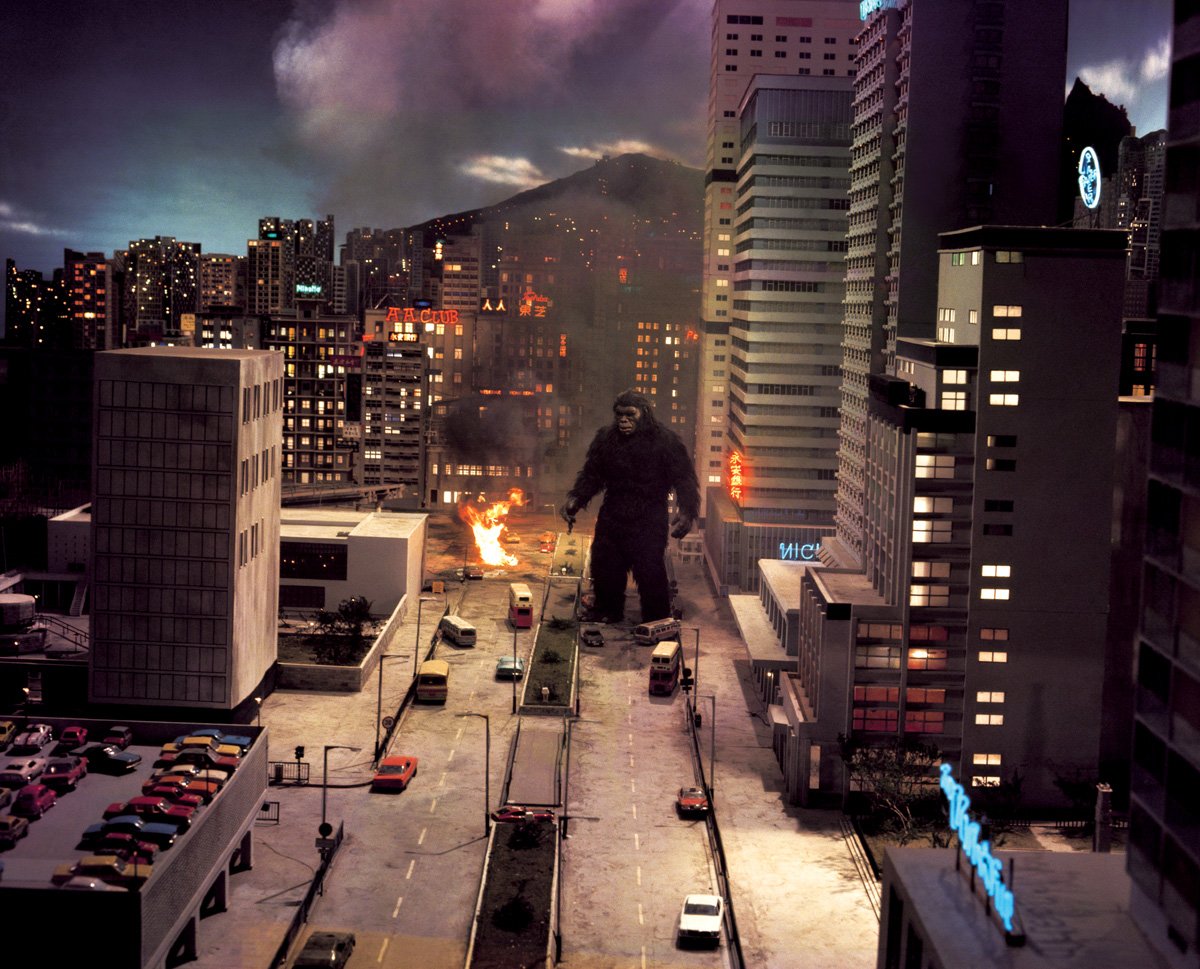 Despite myriad appearances and cameos as varied and eclectic as Yellow Submarine (1968) and The Lego Batman Movie (2017), a consistent, lengthy Kong franchise is non-existent (at least, in the way we understand a “franchise” today). Unusually, the great ape’s theatrical films tend to appear in pairs and in relatively quick succession. Those pairs themselves, however, often emerge decades apart: King Kong and Son of Kong (both 1933) were followed thirty years later by Toho’s dual take on the character, King Kong vs. Godzilla (1962) and King Kong Escapes (1967).

A decade later came the Dino De Laurentiis-produced remake (1976) and its own sequel a further decade later, King Kong Lives (1986). Flash-forward another thirty-odd years, and new pair of Kong films emerges – Kong: Skull Island (2017) and Godzilla vs. Kong (2021), both part of Warner Brothers and Legendary Pictures’ “MonsterVerse”. The outlier to this apparent rule of pairs is Peter Jackson’s epic 2005 remake, which arrived on its own with no official accompaniment in the following years.

However – when an official Kong film (or two) is imminent, imitators are never far behind. Kongsploitation as a cinematic phenomenon can be traced back to the earliest days of the great ape’s theatrical endeavours. Wasei King Kong (1933) is a now-lost three-reel comedy short directed by Torajiro Saito, distributed by Shochiku to promote the Japanese release of the original Kong.

Five years later, Soya Kumagai’s The King Kong That Appeared in Edo (1938) was released. A silent period drama in two parts, the film tells the story of deceit among warring clans, and a captive ape trained to carry out wicked deeds. Accounts differ on the actual size of the titular creature as depicted in the picture itself (which, like Wasei King Kong, is now lost), but considering the film was released to capitalize on King Kong’s 1938 reissue in Japan, a giant ape in advertisement materials was a given.

In the following decades, innumerable Kong clones emerged. Mighty Joe Young (1949) reunited the original Kong’s co-director Ernest B. Schoedsack with one of its stars, Robert Armstrong. Konga (1961) featured a giant, mutated chimpanzee-turned-gorilla that eventually rampages across London. The South Korean/US co-production A*P*E (1976) “dazzled” audiences with a giant ape’s tongue-in-cheek rampage through Seoul – in 3-D! The most famous and beloved of the Kong clones, however, emerged from the legendary Shaw Brothers Studios in Hong Kong: The Mighty Peking Man (1977). Like A*P*E, The Mighty Peking Man was produced and released to capitalise on the all-consuming marketing blitz that surrounded the 1976 King Kong remake. 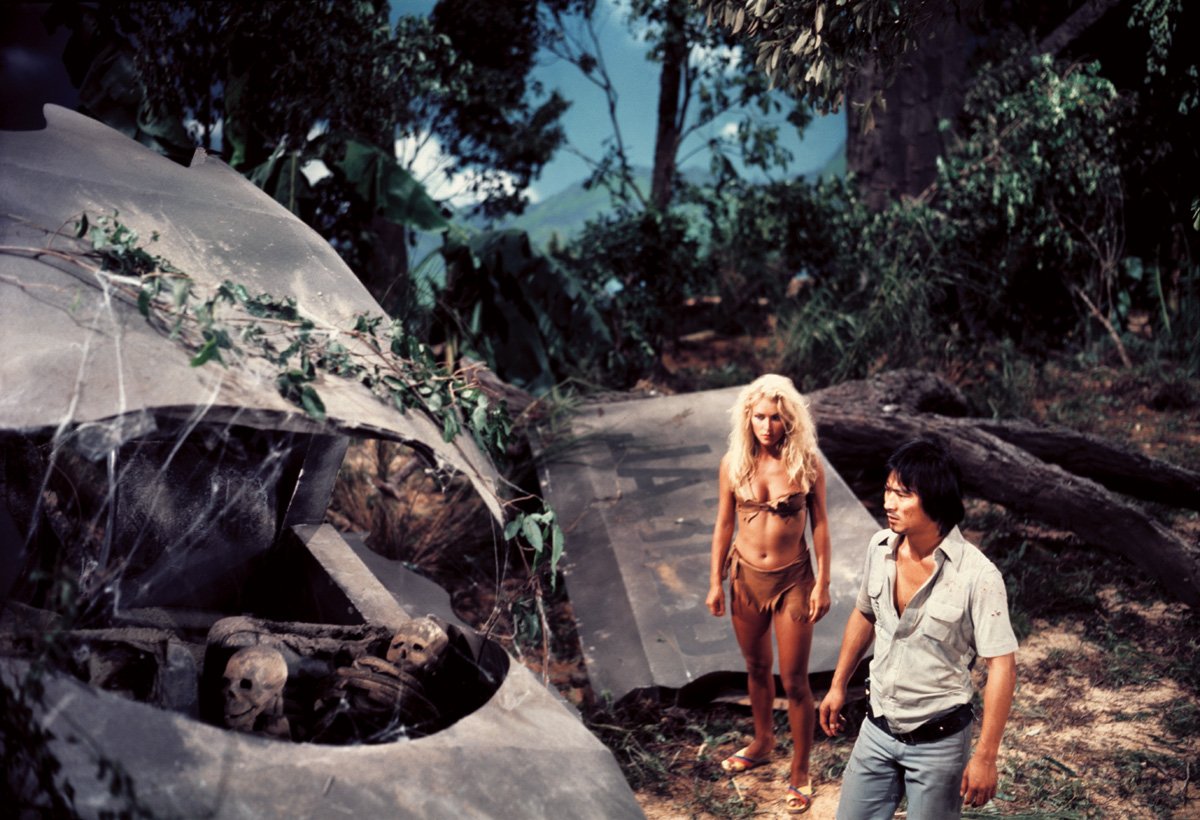 The film follows Johnny (cult favourite Danny Lee, of The Killer, The Untold Story, and Inframan fame) as he heads an expedition into the Himalayas in search of Utam, the mythical Peking Man. There, he discovers not only the colossal, yeti-like creature, but also Samantha (Evelyne Kraft, sporting an animal skin bikini that would make Raquel Welch blush), an orphaned “wild woman” raised by the Peking Man after her family’s plane crashed in the mountains in her childhood. Johnny brings both Utam and Samantha back to Hong Kong, where the Peking Man is paraded on display. Utam – like Kong before him – inevitably breaks free, and proceeds on a spectacular rampage through Hong Kong, confronting sleazy capitalists and the British army along the way.

The Mighty Peking Man sets itself apart from other films in the Kongsploitation craze due to the sheer amount of celebrated talent that brought it to life. Directed by Ho Meng Hua and produced by Runme Shaw himself, the film also features dizzying tokusatsu special effects spearheaded by experienced talent imported from Toho. Sadamasa Arikawa – protégé of the illustrious Eiji Tsuburaya and veteran of almost every Toho science-fiction and monster film from the mid-50s to the late-60s – served as special effects director, and was assisted by Koichi Kawakita, who would go on to oversee the special effects of Godzilla’s revival from the late-80s to the mid-90s. Toho’s fabled suitmaker and sculptor Keizo Murase designed and built the Peking Man himself, and even donned the suit for some on-camera stunt work. Utam obviously left a mark on his creator as, in 2018, Murase – well into his 80s – donned the Peking Man costume once again, during demonstration performances at the G-FEST convention in Chicago.

Not every would-be Kong reaches the exhilarating heights of The Mighty Peking Man (after all, it’s not every Kongsploitation picture that receives a theatrical re-release under Quentin Tarantino), but Utam exists amidst innumerable Kong knock-offs and homages. Titles like King of Kong Island (1968), The Mighty Gorga (1969) King Kung Fu (1976), Queen Kong (1976), Yeti: Giant of the 20th Century (1977), King – get ready for it – Dong (1984), and Banglar King Kong (2010) continue to stoke curiosity and affection among genre lovers. Kongsploitation happily survives to this day: in 2021, the infamous Asylum released Ape vs. Monster, a mockbuster cashing-in on a certain heavyweight match. For a once (and future?) king, Kong still inspires reverence and tribute like no other – a legacy any monarch would envy.

A Knack for Doing Wrong: the Films of Claude Chabrol