Debatable a declaration though this is, it is nonetheless noteworthy that it came from none other than Noriaki Yuasa – director of all but one of the original cycle of Gamera films, and a score of other film and television productions throughout an eclectic, storied career.

Yuasa’s stance was made with specific reference to Gamera: Guardian of the Universe (1995) and Gamera 2: Attack of Legion (1996), the first two entries in Shusuke Kaneko’s rebooted series, of which the increased dramatic stakes and additional characterisation of its monster stars were of particular issue to the Daiei veteran. Regardless of the veracity of his declaration, it unfairly casts a self-reflecting shadow over Yuasa’s own directorial efforts, much of which are – if not “art films” – richly dramatic, intensely surreal, and colourfully character-driven.

The son of noted stage actor Hikaru Hoshi, Yuasa was born in 1933 and spent much of his childhood surrounded by actors, directors, and producers, having lived with his family in housing for film industry professionals. After he and his childhood friends appeared in several films as extras, Yuasa was eventually given the lead in a stage production near the end of the Second World War; this ultimately never came to fruition due to air raid alerts. Throughout the war, Yuasa made his first credited theatrical appearances, including under the direction of his uncle Koji Shima, whose Warning From Space (1956) Yuasa would also appear in as an extra.

Shortly after the Nikkatsu Corporation began actively producing films again in 1954, Yuasa undertook a series of rigorous studio-mandated examinations, eventually being granted the role of assistant director. Some years later – and despite lacking an official promotion – Yuasa made his directorial debut with the musical comedy If You’re Happy, Clap Your Hands (1964), before being assigned to edit a trailer for a career-changing black and white creature feature – just probably not the one you’re expecting.

Dissatisfied with Toho’s dominance of big-screen science fiction and monster films, Daiei wanted a runaway kaiju hit of its own. The would-be result was Giant Horde Beast Nezura (1964), the story of a swarm of giant mutant rats overrunning Tokyo. Mitsuo Murayama of The Invisible Man vs. The Human Fly (1957) was slated to direct, but after shooting only a few scenes, the production was permanently shut down, leaving Daiei in need of a new monster.

A proposal from producer-screenwriter team Yonejiro Saito and Nisan Takahashi, “Attack on Tokyo by Fire Breathing Turtle”, was given the go-ahead by studio chief Masaichi Nagata (who insisted the turtle should also fly). However, the Nezura disaster – which included an outbreak of lice and ticks among Daiei staff members caused by feral sewer rats utilised during filming – made many of the studio’s more experienced directors wary of taking on a special effects picture. Thus, Gamera, the Giant Monster (1965) was assigned to Yuasa, and daikaiju history was made. 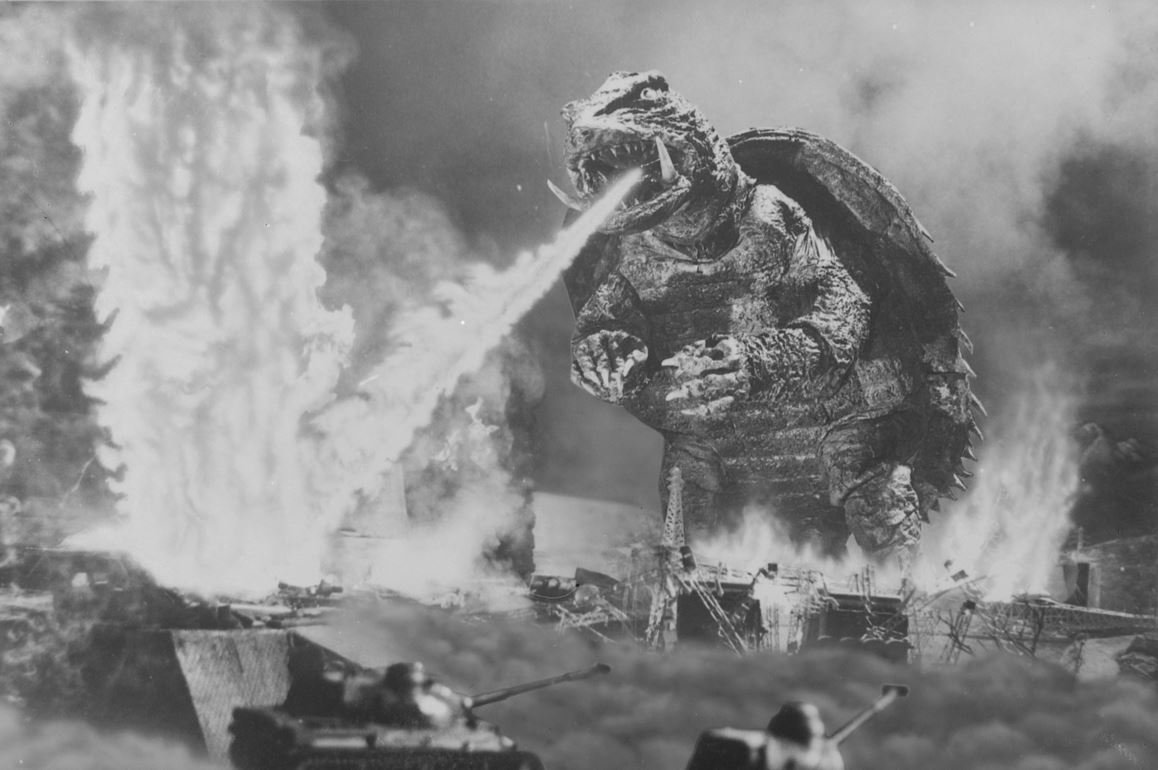 Gamera the Giant Monster (1965), the first of seven Gamera films directed by Yuasa

Daiei expected success with Gamera, but didn’t anticipate just how popular the film would prove. A sequel, Gamera vs. Barugon (1966) was promptly greenlit, but Yuasa was relegated solely to special-effects duties under the general direction of the more experienced Shigeo Tanaka. However, the film proved unpopular with children and younger viewers, with long stretches completely lacking monster action. Set on course-correcting, Yuasa regained the reigns of the franchise he helped originate with the next installment, Gamera vs. Gyaos (1967).

In-between the fourth and fifth Gamera films, Yuasa was assigned to a project that – at first – appears something of an outlier within his filmography: the morose gothic horror The Snake Girl and the Silver-Haired Witch (1968). The story of a young girl reuniting with her estranged family only to find herself at the mercy of strange occurrences and terrifying yōkai, Snake Girl is luxuriously atmospheric and opulently gothic, initially standing in stark contrast to what viewers may expect of Yuasa. Produced as a cheaper “Class B” film for Daiei, the film was shot in cost-effective black and white.

Ultimately, however, the sharp, crisp monochrome cinematography (courtesy of Akira Uehara) plays to the film’s favour: the manor house that Sayuri (Yachie Matsui) calls home is dripping in deep, inky shadows, while the outside world appears bright and welcoming, but forever out of permanent reach. With his robust and reliable direction, Yuasa expertly concocts a deep-seeded tone of dread and impending catastrophe: the viewer deeply cares for Sayuri’s mental and physical wellbeing, and fears danger does literally lurk around every corner.

The Snake Girl and the Silver-Haired Witch (1968) was a rare departure for Nuasa, one of only two non-Gamera films he directed

Beyond the creaky floorboards and dusty cobwebs of The Snake Girl and the Silver-Haired Witch, there nevertheless lurks something purer and much more familiar to fans of Yuasa’s kaiju output: the simple story of a child in peril, entering the world of the fantastic. Just as Akio (Nobuhiro Kajima) and Tom (Christopher Murphy) would be whisked away to the far-off planet Terra in Gamera vs. Guiron (1969) the following year, Sayuri is transported to a similarly unearthly realm, albeit one much more domestic in appearance.

Though the titular spirits of Snake Girl represent a very different kind of monster than Gyaos or Guiron, they nonetheless fulfil a comparable role: an otherworldly antagonist for our hero to overcome. For Sayuri, however, there is no jet-powered kaiju saviour to thwart the monstrous threat, and she is instead left to her own wiles and cunning to survive her ethereal ordeal.

Yuasa would go on to direct four more Gamera pictures until Daiei declared bankruptcy in 1971. After the titanic terrapin’s death-knell revival under “New Daiei”, Gamera: Super Monster (1980), Yuasa worked on Ultraman 80 (1980) for Tsuburaya Productions, as well as numerous other television and direct-to-video productions in subsequent years.

Noriaki Yuasa died of a stroke on June 14th, 2004, but not before attending several G-Fest conventions in California and Illinois. At G-Fest, Yuasa’s eyes were opened to the sheer breadth of individuals to whom his work was formative and beloved, and he in-turn was revered and cherished – especially by those he had so entertained throughout his career: children.

The man himself may not have considered Gamera “art”, but his enduring legacy and indefatigable popularity ensures that Noriaki Yuasa’s work will continue to charm and delight audiences worldwide for generations to come.

After all, who needs art when you have heart?

Quentin Dupieux and the Unexpected Comfort of Absurdism