Yōkai Monsters: Spook Warfare (Yōkai Daisenso, 1968) is arguably the most well-regarded of Daiei’s ‘60s Yōkai trilogy available on Blu-ray from Arrow Video. The first film, Yōkai Monsters: 100 Monsters (also 1968) had been successful for Daiei Film, and they soon followed it up with a sequel. While 100 Monsters was a tale of the meek against the mighty with a supernatural background, Spook Warfare would ramp up the comedy, ghosts, and more.

Spook Warfare instantly hits you with its incredible title – and its striking opening. A Babylonian deity named Daimon escapes imprisonment when disturbed by tomb raiders. Flying to Japan, Daimon quickly takes human form in a magistrate’s body, feasting on human blood. Meanwhile, the local yōkai – spirits and ghosts of Japanese folklore – don’t care for this newcomer, and band together to take on the devious Daimon in an all-out war.

Whereas 100 Monsters is arguably a horror film, Spook Warfare comfortably moves into comedic territory. But don’t let that fool you, for Spook Warfare gives us some interesting ideas about Japan and its renewed world image by the 1960s.

It is safe to say that Japan had significantly changed in the twenty-three years that followed the end of World War II. The US Occupation ended in 1952, and had seen no fewer than three general elections before its end; the Liberal Democratic Party’s political hegemony would take root in the 1950s; and Japan’s economy revived in astonishing fashion with an eventual 10% annual growth rate in Gross National Product every year throughout the ‘60s.

On the world stage, Japan’s international standing was changing as well. As observed by Dr. Meghan Warner Mettler in a 2015 lecture, the propagandised image of wartime Japan had given way to one of a middle-class holiday destination. Japan was rehabilitated in the American consciousness as a land of delicate and exotic beauty, a far cry from anti-Japanese wartime propaganda, internment camps, and the joke that Japanese products were cheap – which, surprisingly, can be seen in Kurt Neumann’s The Fly (1958) of all places.

Similarly, on a cultural level, one need only consider the 1961 hit song, Ue o Muite Aruko (better known to English speakers as Sukiyaki), by Kyu Sakamoto, to see how Japan was successfully exported abroad. Sakamoto’s hit would top the charts across the world, reaching the number 1 spot on the US Billboard 100 for several weeks in June 1963 – the only Asian single to do so until BTS’ 2020 hit, Dynamite. 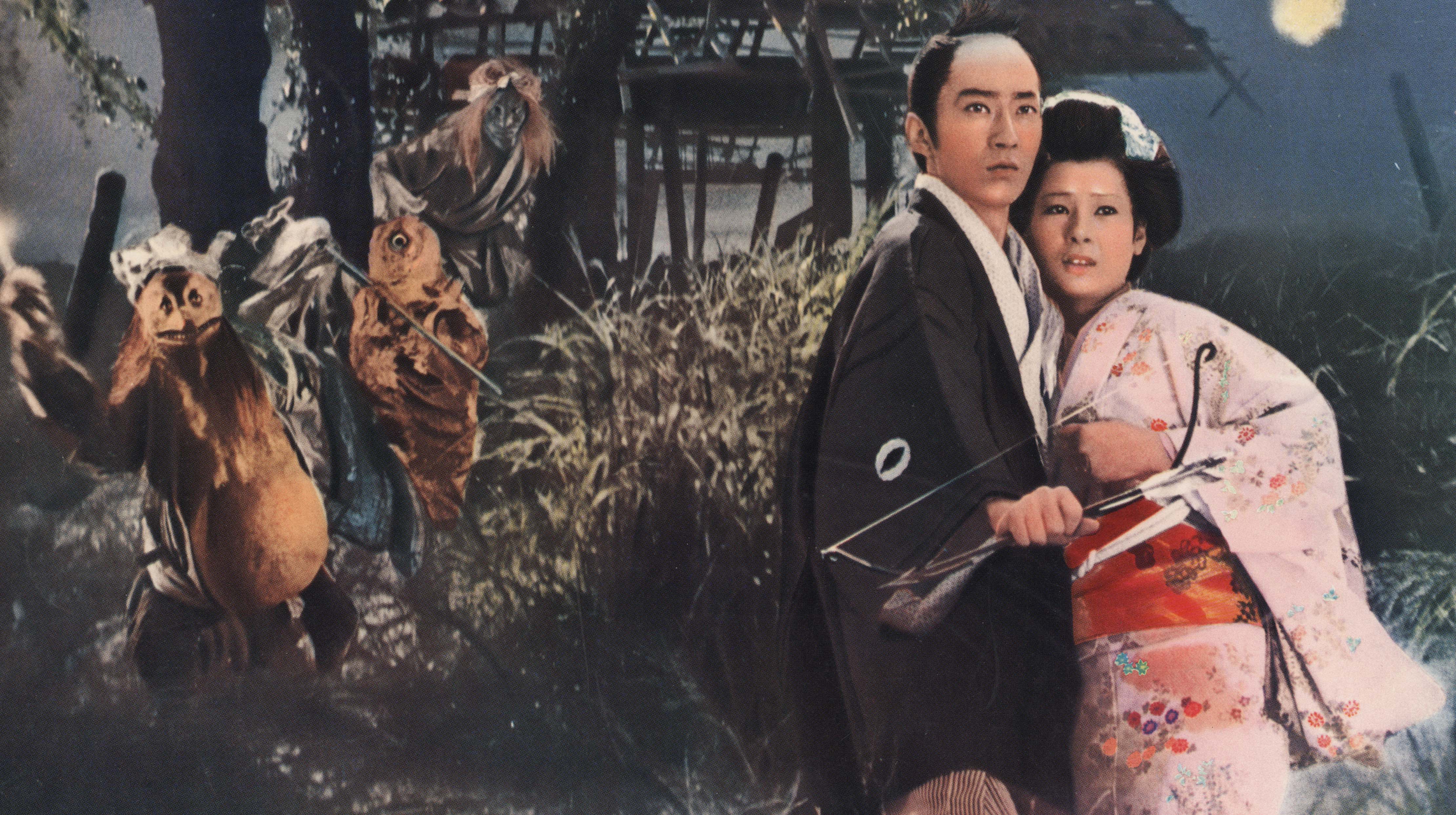 Of course, one of the clearest examples of Japan’s renewed image was the 1964 Tokyo Olympics. The eyes of the world turned to a newly-democratised and Westernised Japan, with Emperor Hirohito declaring the ceremonies open – the former US enemy now an ally of the West in East Asia. The world was invited to see a new and revitalised Japan. The once-devastated Tokyo was now an impressive metropolis, and technological marvels like the Shinkansen bullet train (fully put into operation that same year) have become permanently associated with Japan to this day.

Westernisation in the post-war era had already been discussed on-screen by the time of Daiei’s Yōkai trilogy; from the later family dramas of Yasujirō Ozu like An Autumn Afternoon (1962) to ‘salaryman’ comedies like You Can Succeed, Too (1964). In particular, An Autumn Afternoon features a poignant moment in which the film’s lead, played by Ozu regular Chishū Ryū, sits at a bar listening to a wartime march played for his drunken companion. The scene suggests a sobered disconnect between Japan’s past and present. What was once an anthem for Imperial morale is now little more than a novelty in a small bar.

But while Ozu’s film discusses such changes with an air of restrained melancholy, Spook Warfare is a different beast altogether.

The film itself was the latest of several adaptations of a single source material. Shigeru Mizuki’s influential yōkai manga, Gegege no Kitarō, has spun many decades and several incarnations. Centred on a young spirit boy named Kitaro, the series follows his exploits with local yōkai – who he wants to live in harmony with humans. From 1965 through 1967, the series was published under the name Hakaba no Kitarō, as part of Shonen Magazine. In April 1966, a loose retelling of the Momotarō tale featured in the series (where it was also called Yōkai Daisenso). Momotarō, a folkloric Japanese story which has been adapted many times, follows a young boy who leads a band of animals to liberate an island infested with demons. The Kitarō version adapts the story so that Japanese yōkai are called upon to free a fictitious Okinawan island from Westernised monsters – two of which resemble Bela Lugosi’s Dracula and Boris Karloff’s Frankenstein. It is worth mentioning that the US did not return Okinawa to Japanese control until May 1972, lending symbolic value to the manga. Spook Warfare loosely takes the idea of yōkai monsters called to fight an invader from Kitarō and broadly draws its lineage from Momotarō.

Battles between humans (read: patriotic Japanese) and Westernised or othered yōkai have appeared throughout Japanese history. For example, stories with yōkai (or similar supernatural entities) designed to represent the Chinese appeared during the first Sino-Japanese war (1894-95). As noted by scholar Noriko T. Reider, during World War II, the government-backed Shin Nippon Mangaka Kyōkai (New Association of Japanese Cartoonists) published Manga – the only cartoon magazine to run at the time – which depicted Allied leaders as demons. However, Gegege no Kitarō marks a conflict in which yōkai face other monsters, as opposed to humans. 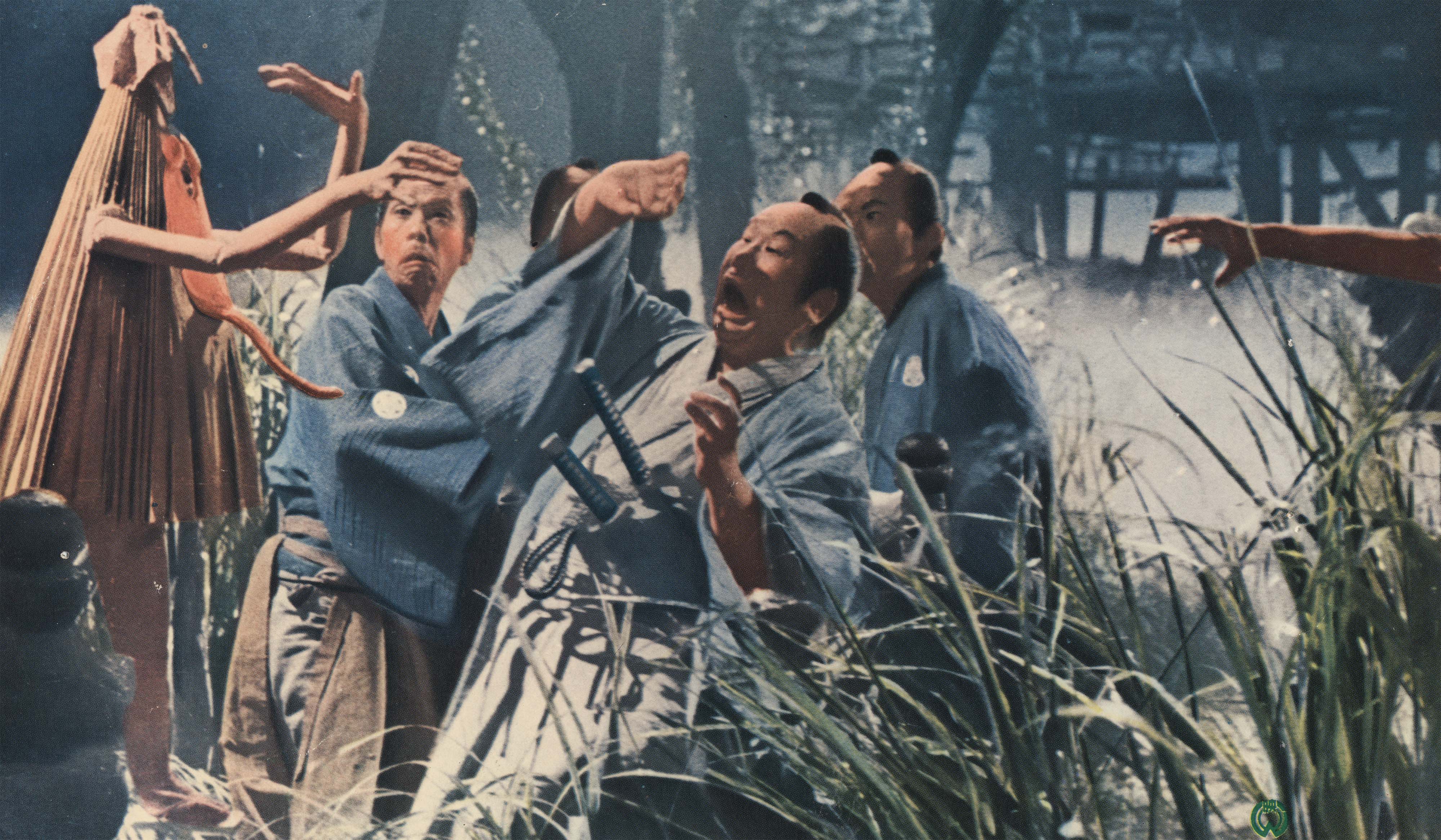 Indeed, as scholar of Japanese media Zília Papp has noted, the manga and film versions transpose the personification of the yōkai so that they become stand-ins for Japan itself, rather than an alien other.

As with 100 Monsters, the spirits in Spook Warfare are all drawn from classic yōkai stories: the turtle-like Kappa, Rokurokobi with its elongated neck, and the amorphous Nuppeppo to name but a few. These yōkai believe their Japanese pride is at stake now that Daimon has moved in on their turf.

Given their folkloric origins across various periods of Japanese history, one is indeed able to view the yōkai as stand-ins for Japan itself as Papp suggests. Daimon is less an othered depiction of a real-life enemy than an abstract national identity conflict made flesh. In defeating Daimon (in a spectacular, effects-laden climax), the yōkai depict a vision of Japan reasserting itself – national pride is safe once again. Here is an arena where Japanese nationalism can win out, detached from any uncomfortable connections to the war. Indeed, the film’s end shows the yōkai all skipping off into the mountains. It’s a beautiful image, but in the use of the mountains, there’s also a suggestion that these creatures are of the earth – intrinsically linked with Japan as a land as well as a people.

Indeed, as the yōkai are shown to be friendly with the human cast, they also become disarming and charming! Some tales of the Kappa depict it as a particularly nasty and violent creature, but here he is charismatic and endearing. Once again, the yōkai’s position as a reflection of Japan marks the country’s change on the world stage. Fear – as a wartime reaction or as a response to a folkloric ghost story – is replaced by engagement and interest.

In its way, Spook Warfare isn’t just a spectacle of entertainment. It can also be read as an optimistic outlook on Japan’s future and then-present self.

As these films make their way to Blu-ray for the first time in the UK thanks to Arrow Video, band together with these spooky spirits and heed the (friendly) call to arms of Spook Warfare.