Let’s face it, Robocop (1987) is a silly name. It almost destroyed its chances of being made being rejected off-hand by production companies and directors alike who were repelled by its cheap, throwaway feel. But weirdly, that’s probably the point. For Robocop, Paul Verhoeven’s unrelenting cult favourite and box office smash represents a key moment in the up and down thrill-ride of the Hollywood blockbuster. The movie, perhaps more than any other at any other time, perfectly captured the contradictions not only of the industry but of American lifestyle and politics too. Being a Dutch filmmaker and thus an outsider, gave Verhoeven the ideal viewpoint from which he could offer a truer glimpse of the US and its citizens in that period. Robocop and two of Verhoeven’s other American features Total Recall (1990) and Starship Troopers (1997) were somehow able to provide a ridiculous spectacle imbued with an intellectual undercurrent of social commentary and societal reflection.

“One of the worst decades in Hollywood…you couldn’t say shit even if you had a mouthful. This came back in the 1980s and this is what we’re living through right now, the 1980s part two…”

This summation by Hollywood’s favourite rebel director Quentin Tarantino is when taken at face value, difficult to disagree with. However, as with any other soundbite, it fails to establish a full picture. If we are going to assess a cinematic decade more fairly It requires a more nuanced appraisal.

While it’s hard not to see the 50s as a much more homogenised period, especially when compared to the cinema that was pouring out of the US during what became known as the New Hollywood era in the late 60s and early 70s, some moviemakers, while under more scrutiny than they had ever faced before, were still able to smuggle through ‘message’ material or controversial subject matter, simply by using the decade and its trappings against itself. In the tinder box climate of the communist witch hunts and the general anti-radicalisation of the movie business, directors and writers, those that hadn’t been black-listed, were still able to subtly instil a clever strain of subversion into their science fiction, westerns or wartime dramas. 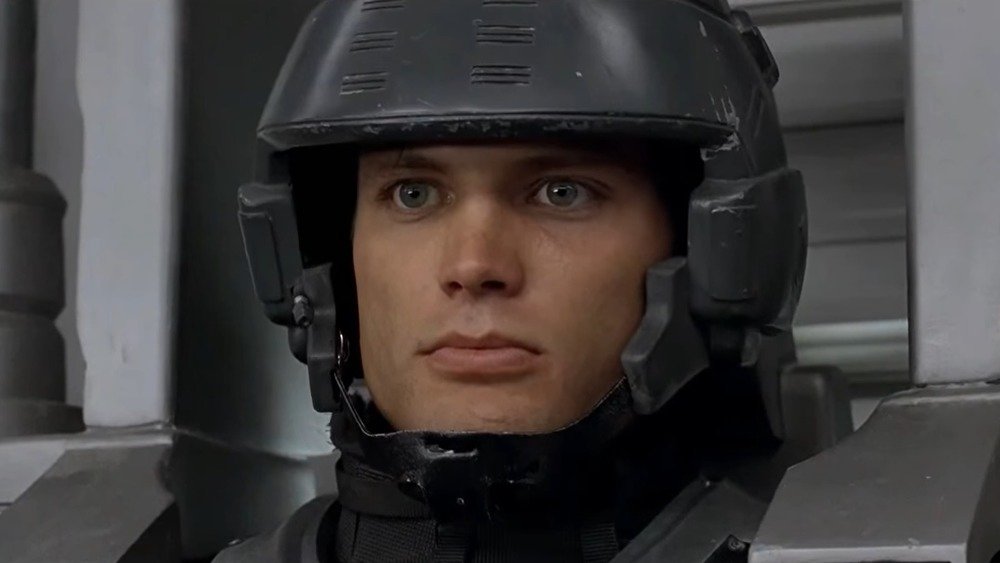 Though we might associate the 50s with Doris Day musicals or more whimsical family-friendly comedies, it should also not be forgotten that the same decade also bought us Cold War warnings in a host of giant monster movies, homosexual sub-texts via Nicholas Ray pictures like Johnny Guitar (1954) and Rebel Without a Cause (1955) and critical swipes aimed at McCarthyism and right-wing aggression with classic cowboy flick High Noon (1952). So, in that sense, while Tarantino’s assessment of the 80s being another version of the 50s is meant as an attack, it arguably becomes a more positive quote.

One man that seemed to understand the 80s and early 90s, particularly how they affected mainstream American culture, was undoubtedly Paul Verhoeven. Having worked in television for several years the director was able to helm a run of movies from his home in the Netherlands including Turkish Delight (1973), Soldier of Orange (1977) and Spetters (1980). However, a change in regime in his native country meant that he and other artists came under increasingly oppressive scrutiny. This led to his move to Hollywood, where he felt there may be more freedom for filmmakers like himself. His first American feature was the odd and extremely violent medieval adventure movie Flesh and Blood (1985). Starring Rutger Hauer, it was sexualised, stylised and uncommonly brutal. A flop at the box office, it baffled critics and was largely ignored by the general public. Yet, somehow, when viewed now it feels very much like a pre-cursor to the wildly popular Game of Thrones with its mix of death, horror and female nudity.

Verhoeven then received a script written by Edward Neumeier and Michael Miner. At first not seeing any potential in the stupidly named story, he promptly cast Robocop aside. Luckily, his wife Martine gave it the once over and encouraged her husband to study it again as he may have missed the sub-text and the script’s themes about individuality. Orion Pictures under the auspices of producer Jon Davison greenlit the project with Verhoeven and the two original writers on board. 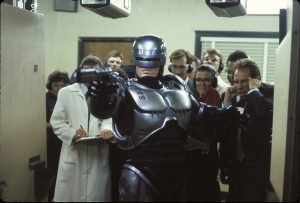 Casting Peter Weir as the titular character arguably gave the ‘on the face it’ daft science fiction number an added gravitas, with its Frankenstein/Christ undertones. But what Robocop does most intelligently is to be the kind of meta-style production that is so en-vogue today. For as much as Verhoeven’s movie is about the physical reconstruction of a man, it is also more knowingly about the deconstruction of 80s US society. Yes, we can enjoy visual and visceral aspects of the story as they follow a fairly standard hero’s journey type narrative, yet scrape the surface and we are presented with an unflattering reflection of the Reagan era with its hypocrisies, cold war fears and its consumerist obsessions.

But though Verhoeven claimed no particular political allegiance, his ability to present us with an outsider’s viewpoint on a whole country’s attitude can hardly be seen as pro-government. He offers us a world where violence is not only on an urban level “Takes money to make money. We steal money to buy coke then sell the coke to make even more money. Capital investment, man.” in this place violence is woven into the culture. It is spliced into the language of the boardroom where a subordinate can be shot to pieces only for the corporation to shrug it off. Yet the brutality doesn’t stop there as we see it spill into TV shows, the news, or family board games “Nukem – get them before they get you”. The police are owned by private companies and humans can be turned into machines all in the name of profit – the real root of the violence that pervades in this twisted, yet not completely unrecognisable society.

This idea of capitalism gone mad was explored further in Verhoeven’s later Total Recall. Taking inspiration from the Phillip K Dick short story, We Can Remember it for you Wholesale, here corporations don’t just own people or companies but whole planets. The Mars colony is divided into the ultra-rich and extremely poor, the latter being presented as mutants, arguably reflecting how genuinely wealthy people view those lower down the scale. This sense of uncontrolled money-making is stretched to the limits when an evil business tycoon cuts off the oxygen to an entire subsection of the Martian base.

Similar themes are explored in Showgirls (1995) where the onscreen lap dancing antics become an allegory for the way in which Hollywood itself can be seen as an abusive employer manipulating the audience and players in a deeply reprehensible skin game of its own. Part exploitation piece, part big-budget caper much of its satirical content was lost on the critics and cinemagoers alike. But it wouldn’t be Verhoeven if it wasn’t partly misunderstood. 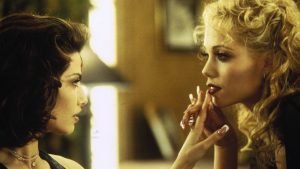 Starship Troopers was possibly his most misunderstood. While it gave us the bones of an excruciating gung-ho storyline of interplanetary warfare, which many took at face value, some even arguing that it was merely throwaway trash, its blatant and heart-breaking portrayal of a Mom and apple-pie brand of lethal fascism is about as subversive as one can get. And this is perhaps what makes Verhoeven, especially his work from the 80s and 90s stand out so clearly. It’s not just that he’s able to make controversial or satirical science fiction films, plenty of people do and have done that, it’s how he presents those dystopian viewpoints.

Arguably any writer and director might potentially offer us intelligent and deep future visions, yet the harder part is to wrap those clever ideas in a bombastic crowd-pleasing showcase of special effects. Total Recall, for instance, is every bit the big dumb Arnold Schwarzenegger action movie some people want it to be, but it is also a remarkably challenging piece once you strip it down to its subversive roots. Today, Hollywood seems split between the ‘worthy’ feature and the ‘fun’ knockabout effects-laden summer blockbuster. Verhoeven, is unique in many ways, because he, more than any other director, found a way to incorporate the explosive showstopper with an intellectual mockery of many of society’s most sacred cows.