Japan’s famously demanding work culture is one of the most notorious on the planet. But when a narrative calls for a relatable everyman to lead the viewer on an adventure? There remain few better candidates in Japan than the corporate salaryman.

It’s a stereotype ingrained into the patriarchal society of Japan. Tradition decrees that men must provide for their families at all cost, and so white-collar work in the post-war years became encoded with rules and conventions deemed excessive to the outside world. Japanese men who conform to this ideal will thus work long hours at the office, drink with their bosses into the late hours, and stay with the same corporation for the duration of their careers, fulfilling the cycle of work, overtime, and social commitments in perpetuity until death or retirement.

And yet the salaryman, as a cinematic stereotype, pops up in all manner of unlikely film stories. As a recognisable stock character who has often surrendered their individuality to their employer and committed to a life of monotony, he is a canvas onto which all kinds of hijinks and escapades can be flung toward. Given this restrictive work culture’s conduciveness with escapist thinking, these adventures often make for appropriately imaginative viewing.

The release of Arrow’s corporation comedy Giants and Toys arrives just weeks after the Japan Times reported that over 70% of survey respondents in Japan are now declining calls from superiors and clients for social drinks. Perhaps it is a symptom of the pandemic’s transformation of working cultures across the globe. More likely, it is a suggestion that the Japanese work culture so notorious in the West is becoming increasingly outdated.

What better time, then, to reflect on some of the most memorable outings of the Japanese salaryman on screen? A tireless explorer who, despite his obligations, is capable of the most unlikely adventures in cinema — his world, it seems, is as vibrant as any.

It’s all-out war in Yasuzô Masumura’s drama Giant and Toys, as three rival caramel corporations battle it out for superiority in the crowded Japanese confectionery market of 1958.

The film opens with an army of men in suits, marching towards the workplace as an air raid siren rings out across the streets. The noise, in fact, is merely the work bell — and the identically-dressed legions are the marketing departments, geared up and ready to scheme the latest advertising assaults.

“The next campaign will be a war!” offers one business-focused commentator; “posters and TV commercials are the artillery… salesmen are the infantry,” says another. And while the tactics of World, Giant and Apollo candies are largely preoccupied with loudspeakers on the streets and campaign vehicles (the tanks of the corporate world), the film’s setting at the dawn of the home television revolution makes it a prescient document of the developing advertising world. 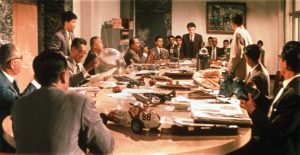 But it is the sobering journey of Takashi Shimura’s terminally ill bureaucrat Watanabe in Ikiru that remains one of the most moving tales in Kurosawa’s entire oeuvre. Only as he comes to accept his fate does Watanabe realise the farce of his life of bureaucratic monotony. His dying passion to build a playground for children, then, becomes a hopeful act for change in future generations.

Major studios in Japan ran into some serious financial trouble in the ‘60s, as the advent of home television transformed the market of consumption. Cinemas were on the verge of going bust, but thanks to a boom in the production of lurid pinku eiga (pink films), many successfully adapted as adult-only theatres, marketing softcore titillation to overworked salarymen looking for quick thrills in their meagre spare time.

As such, the salaryman himself would become an essential stock character in these tales of sex and smut. Blue Film Woman — one of the first colour pink films — is an example of a workman’s duties turned pear-shaped. A stockbroker faces bankruptcy after an unexpected economic crash, leaving his wife and daughter in a precarious position: the former is offered up to a nefarious loan shark, becoming a plaything to both him and his mentally challenged son.

Cyberpunk cinema developed out of Japan’s booming bubble economy, which saw the nation become a global superpower in the ‘80s. But cyberpunk filmmakers like Shunya Tsukamoto and Sogo Ishii (Burst City) did not envision this utopian ideal lasting — and thus the post-apocalyptic world of Tetsuo: Iron Man, full of writhing metal wastelands and physical metamorphoses, would become a terrifying forecast for the consequences of reckless spending.

Tomorowo Tageuchi’s anonymous salaryman is the fitting centrepoint in this chaotic clash of worlds — a nameless pawn forced to undergo a horrifying bodily transformation. As a mascot for business rigidity, he symbolises the technological revolution of the age in which the film was made, whereas his vulnerability within his broken surroundings points to the economic crash that would bring Japan to its knees in the ‘90s.

A pre-Audition Takashi Miike strikes in this shining jewel of V-Cinema — the booming straight-to-video film market which launched the careers of like-minded talents such as SABU (Dangan Runner) and Kiyoshi Kurosawa (Cure).

Masahiro Motoki plays the suit-wearing lead, who is reluctantly dispatched away from his day-to-day duties in the city to investigate a vein of jade deposits in a remote Chinese village. Accosted by hapless yakuza enforcer Ujiee (a hilarious Renji Ishibashi), he ends up on a wild and wacky adventure through wild terrain and oppressive weather, in search of the faraway haven he has been tasked to find.

More light-hearted and poignant in nature than his more famous crime and action works, The Bird People in China is a road movie that at times takes on qualities of David Lynch. It remains one of Miike’s most overlooked films — and one of his very best.

While arguably better known for the J-horror classics Cure and Pulse around the turn of the century, Kiyoshi Kurosawa’s greatest achievement prior to his Silver Lion win at Venice in 2020 (for Wife of a Spy) was the touching drama Tokyo Sonata — which itself was awarded the Un Certain Regard Jury Prize at Cannes in 2008.

Tokyo Sonata embodies many tropes of the classic family dramas of Yasujiro Ozu (Tokyo Sonata, Late Spring) — only in a contemporary setting, what was once envisioned as a peaceful ideal no longer rings true. Family patriarch Ryūhei Sasaki, who grows old in a hectic office environment, is relinquished of his duties in senior management in favour of cheap Chinese labour and, unable to come clean to his family, continues to dress and leave for work each day.

Perceiving his unemployment as failure, and ruing his son’s desire to join the army in order to “protect” his family in his own way, Ryūhei is forced to accept the world’s changing in ways he had not foreseen. It is only through the otherwise neglected talents of his youngest son Kenji that he eventually learns that there may be hope for a brighter future.

As a man who seems to have dabbled in every genre conceivable — often all at once, within a single film — it’s no surprise that Japanese indie cinema arch-destructionist Sion Sono has also been guilty of sending the everyman on a strange path.

In the brilliant Love & Peace, office laughing stock Ryo dreams of becoming a rock star but is stifled by his low self-esteem and isolationism. It’s not until he misguidedly flushes his beloved pet turtle Pikadon down the toilet that his fortunes change.

An impassioned public breakdown attracts the attention of a record label executive, and before he knows it, “Wild Ryo”’s life is turned upside down in this bizarre tale of rock music, kaiju monsters and Pinocchio-style sentient toys.

Stationery salesman Miyamoto is another sorry excuse for a man — at least in the eyes of his straight-talking superiors. He’s small, he’s skinny, and he can’t handle his drink. But worst of all, he’s incapable of occupying the role of protector to his girlfriend, who is sexually assaulted by his boss’ bullish, rugby-playing son.

Miyamoto’s misguided journey towards redemption leads to an ambiguous conclusion, but it serves to reveal the film’s true focus. And as an examination of toxic masculinity in contemporary Japanese society, there are few more potent examples.

Over 60 years on from 1958’s Giants and Toys, Miyamoto offers a fascinating text for side-by-side comparison. The salarymen continue to march to their desks, it seems — but in 2019 such patriarchal and masculine ideals no longer seem to be shaping an idealist future; they are relics of a destructive past.