There’s something very primal about the revenge movie. It’s a genre that seems to connect on a subconscious, almost chemical level with its audience. Who hasn’t wondered, while lying awake in the deepest, most silent depths of the night, that if we were pushed to our very limits, to beyond our breaking point, could we take matters into our own hands? To mark the release of Vengeance Trails – a box set of four classic Italian revenge westerns of the 1960s and 70s – we take a look at 10 of the best revenge and vigilante films that the last fifty years of cinema has to offer. So jamb that six shooter into the waistband of your trousers and unsheathe that samurai sword, it’s time to head out onto the city streets to take care of business.

The first of five contributions Italian director Guilio Peroni’s would make to the spaghetti western genre, and arguably his most visually accomplished film of them all – the opening scenes of a young boy forced to watch the members of his family assaulted and murdered are as dark, brooding and as shockingly intense half a century later. Little wonder then that a few decades later it would become one of the major influences on writer / director Quentin Tarantino’s own cinematic career. Carlo Carlini’s beautiful cinematography both compliments and heightens Peroni’s crafting of a particularly dangerous and troubled time in the American west, as a tale of bitter revenge 15 years in the making carefully unfolds and is finally exacted. 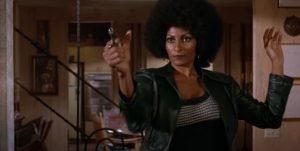 By the time Foxy Brown was released into cinemas, director Jack Hill was already a past master of the ultra-violent, not to mention often schlocky, exploitation genre (in particular the women-in-prison subgenre). The early 70s had already seen the release of what would become three of Hill’s most influential works – The Big Doll House (1971), The Big Bird Cage (1972) and Coffy (1973) – the themes of which the director would revisit again, culminating in, what is now considered to be, a classic of the blaxploitation genre. Pam Greer plays the titular Foxy Brown, a woman out for revenge on those who killed her government agent boyfriend. Although much criticised at the time, particularly for its unflinching violence and stereotypical portrayal of the black community, both the character of Foxy and actress Greer have become feminist icons. Echoes of Hill’s work (most notably, those films from the 1970s) can clearly be seen in the cinematic offerings of the modern auteur directors, such as Robert Rodriguez and the aforementioned Tarantino (even influencing the director to change the central character of Elmore Leonard’s novel Rum Punch from Jackie Burke to Jackie Brown (1997)), as well as the violent, female-centric films of Eli Roth.

Highly controversial and greatly contentious at the time of its original release (though not quite to the degree of its successor, Death Wish II (1982)) Michael Winner’s violent, and arguably irresponsible, revenge film helped launch a new subgenre that would prove hugely popular in American cinema in the late 1970s – the vigilante movie. Along with the Dirty Harry movies (and indeed the next film on this list), the influence and popularity of Winner’s film would guarantee that the gun-wielding, justice-delivering, pitiless vigilante would remain a firm favourite with low-budget film-makers and cinema audiences alike for the next two decades. With a plot that sees architect Paul Kersey (Charles Bronson on typical stoic form) exact bloody and merciless revenge on a group of muggers for the murder of his wife and sexual assault of his daughter, it was much criticised at the time of its release for, what the media saw as, the wholesale endorsement of violence as a solution to violence. Many New Yorkers were also critical of the film for what they saw as an ugly and unwarranted over-exaggeration of the crime problem on the streets of their city at that time.

Still refused a full uncut release in the UK by the British Board of Film Classification to this day, Israeli-born director Meir Zarchi’s debut feature I Spit on Your Grave has caused more problems censorship-wise world wide than practically any other film in the history of Western cinema. Met with an almost unanimous reaction of negativity and revulsion, Zarchi’s film is the poster child (or in this case poster girl) of the revenge film (and the vigilante subgenre in particular) and is an inversion of the previous films on this list: the revenge in this case being exacted by the main character for the wrongs done to them, rather than in retaliation for the wrongs done to friends, family or loved ones. Zarchi’s film is neither visually stylish or particularly interesting to look at, in fact many critics believe that if there hadn’t been such a fuss made by film censors around the world, the film would not have achieved the immortality, or the notoriety it has. Despite this, the film remains a fascinating, if not grossly overrated, example of 70s extreme cinema, and one of the most notorious titles caught up in the Video Nasty dispute. In her 2019 autobiography Inside Out, actress Demi Moore revealed that she was the model used for the infamous theatrical poster for the film.

Forget the Alvin Purple movies [1973-84], forget Sidecar Racers (1975) or Deathcheaters (1976), for my money the real start to the Ozploitation films was here in 1979 with the release of George Miller’s directorial debut Mad Max – the first in an occasional series of action movies that continue to this day. The first film is a strange beast indeed, having its multiple thumbs firmly placed in a variety of genre pies – part dystopian Sci-Fi, part exploitation horror, part social satire, with the final act of the piece transforming suddenly into vigilante revenge thriller. According to Miller, the inspiration for the screenplay came from the most unlikely of sources – the silent comedy movies of performers Harold Lloyd and Buster Keaton, with atmosphere and action sequences the true driving forces behind the movie. Its quirky Aussie style proved a little too much for the US market, which demanded that a completely new vocal soundtrack be recorded using American actors before the film was deemed palatable enough for a cinema release.

Taking its cues from Death Wish six years earlier, James Glickenhaus’s The Exterminator is low-budget grindhouse at its most deft – certainly at its most playful. Yet, the most surprising thing about Glickenhaus’s nasty little action shocker is its disturbingly real-looking special effects, particularly the decapitation scene at the beginning of the film – a scene, incidentally, which upset the BBFC enough that they demanded it be trimmed from the film before they allowed its release on to the home video market. Like I Spit on Your Grave, The Exterminator isn’t particularly attractive to look at, neither is the direction, writing or acting anything special – yet despite all that its actually quite fun, and with its scenes set in a New York city of the late 70s/early 80s, it makes an interesting companion piece to the first Death Wish film. Incidentally, for a brief period in the early 80s, the line “If you’re lying, I’ll be back” was a school playground mantra.

As with several films on this list, controversial director Gaspar Noe’s breakthrough feature Irreversible did its best to upset both critics and cinema goers on its original release in 2002. With the events of the plot told in reverse order, many found the film tough viewing, even for those considering themselves seasoned fans of the revenge genre. Many critics took exception to the almost gleeful way Noe presented some of the more graphic scenes of sexual and physical violence, finding the attention to detail unnecessarily lurid (the New York Times even going so far as to accuse it of being “immature”). Yet some (most notably, film critic Roger Ebert) found that its very construction, presenting the revenge part of the story first before moving backwards to show the crime itself, allowed the audience a somewhat unique opportunity to ponder much more closely and carefully on the nature of vigilante-type retribution; most importantly if the punishment did indeed fit the crime. Twenty years later the argument still rages as to the extent of Irreversible‘s contribution to the genre, with some believing that, despite its good intentions, the film carries a disturbingly uncomfortable homophobic message, one which Noe has vehemently denied. 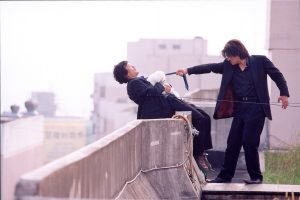 Park Chan-wook’s Oldboy is undoubtedly the most bizarre entry in this list – and, as a consequence, the most interesting. For me, like many other film lovers, Oldboy was my first proper introduction to Korean cinema (available over here in the UK on the old Tartan Asia Extreme label) and I couldn’t have had a better one. The film deals with human anguish and despair, examining the drive behind our obsessions and the need for answers and, ultimately, closure. Oldboy is a symphony of violence and brutality, playing impishly with the nature of perception (both the audiences and the main character Oh Dae-su’s) and is at turns both achingly beautiful and unfairly cruel. It will come as no surprise to learn that on it’s original release, it stirred up some controversy with western cinema audiences with its graphic depictions of extreme bloody violence and a memorable scene involving a live octopus.

Originally released in two ‘volumes’ six months apart (Vol. 1 in 2003, Vol. 2 in 2004) and promoted as Tarantino’s fourth movie, its plot, themes and visual style owe heavily to many films in the revenge genre as well as the vigilante subgenre. Kill Bill is a love letter to the various films the director grew up watching on late night television and at his local drive-in. From grindhouse cinema to spaghetti western, from blaxploitation to martial arts films and Hong Kong cinema – just about every box is ticked (the classic showdown between Uma Thurman’s Bride and Lucy Liu’s O-Ren being a loving homage to Toshiya Fujita’s Lady Snowblood films (1973-74), for example).

Somewhat neatly Jeremy Saulnier’s Blue Ruin manages to bring the entire revenge genre full circle (at least for the time being), pushing it away from the contentious, controversial waters it had somehow managed to navigate itself into over the course of the last three decades, and returns us to a simple tale reminiscent of the one seen in Death Rides a Horse: the life of a simple man has become consumed by one clear goal, to avenge the death of his family. For years his life has become stuck on pause, treading water while all the time fuelling the fires of hatred and bitterness until he is finally confronted with the man who killed his parents. In many ways, Blue Ruin is the revenge genre distilled to its simplest, most basic components. Stripped away of its more outlandish trappings, free of gimmicks, of masks and samurai swords and over-exaggerated machismo. It’s a film that asks the same basic questions I asked at the very beginning of this piece…if we were pushed to our very limits, to beyond our breaking point, could we take matters into our own hands? And it offers some very interesting answers.

Scott Harrison is an award winning scriptwriter, novelist and film critic. He has written tie-in novels and audio plays for a number of film and TV franchises, as well as providing audio commentaries and booklet notes for a wide variety of films ranging from silent Weimar cinema to the pulp 1980s slasher genre. He lives by the sea.

A Generation Pushed Over The Edge