If you’re a fan of cult Italian movies, we sincerely hope you wake early every morning whispering a calm prayer of thanks to Clint Eastwood.

After all, Clint didn’t just help pioneer one great wave of genre movies in Italy (otherwise known as the spaghetti western), he was also instrumental in transforming another, the poliziotteschi.

Of course, Italian crime / police movies existed before Dirty Harry (the earliest poliziotteschi came in the 1960s), but they were transformed forever after Don Siegel’s masterpiece crossed the water, becoming darker, more morally ambiguous, and much more violent.

It makes sense that Clint would become the icon that would lead the poliziotteschi to greater heights, the genre essentially took western tropes and dressed them in different ponchos. The two genres not only shared actors and directors, but composers, cinematography styles, and narrative tropes.

Perhaps the best signifier of this trend is Franco Nero’s success in the Italian crime genre. The artist formerly known as Django (itself a rip-off of Clint’s Man with No Name), Nero was scooped up by Enzo G. Castellari into the first post-Harry poliziotteschi High Crime which used the genre to explore police corruption and vigilante tactics. A huge success in its native country, High Crime was a turning point for the poliziotteschi.

Where the Spaghetti westerns explored the struggle between law and disorder in the distant past, the poliziotteschi movies focused their lens on an explosion of crime in Italy of the modern era: the ‘Years of Lead’ – the term for the specific period of social and political tension in Italy that these movies explored narratively and thematically. As such, Years of Lead is a truly appropriate title for Arrow’s box set, which collects five of the best of the genre.

But these movies didn’t just look to Eastwood’s Man with a Magnum for ideas. After the Dirty Harry influence proved to be so successful, poliziotteschi directors watched many more gritty American crime movies for inspiration.

High Crime itself wasn’t just inspired by Dirty Harry, but by Bullitt and (very directly) The French Connection. Serpico was another key title for the poliziotteschi filmmakers, as was The Godfather.

So, we’ve handed in our gun and badge and taken a desk job: watching every single movie in Arrow’s excellent Years of Lead set to search for clues that’ll allow us to uncover their potential ‘70s cinematic origins. Turns out we don’t exactly have to be Columbo to do so – these things wear their influences on their denim sleeves.

Spoiler alert: 1971 was a monumental year for the makers of the movies in this set. It’s basically the equivalent of 1977 for punk. Confused? Allow us to explain… 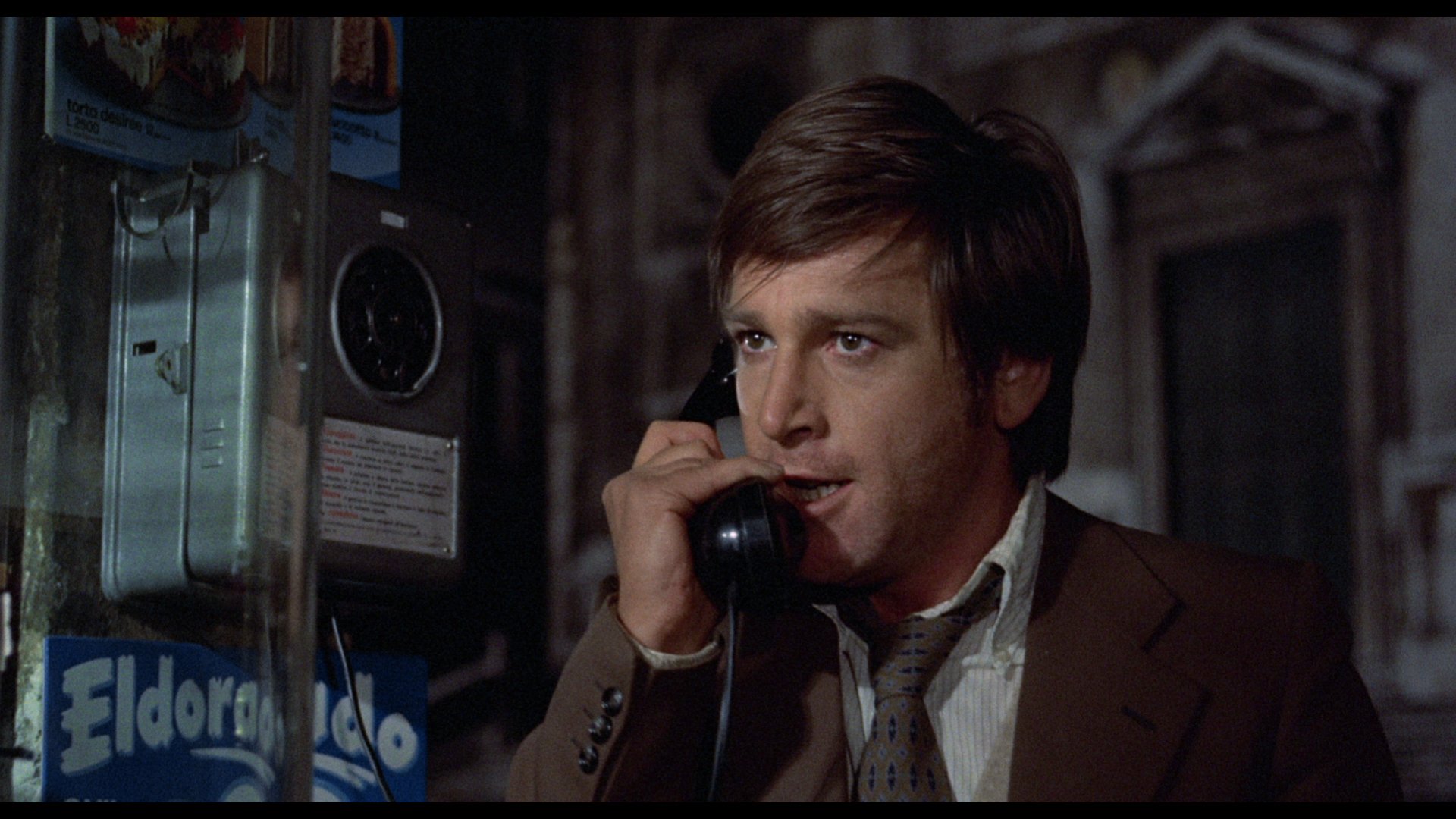 Enzo Cerusico as Fabio in No, the Case is Happily Resolved (1973)

Our first chronological Years of Lead movie actually takes its biggest influence from an Italian film – albeit one that was extremely popular in the States (winning the Oscar for Best Foreign Language Film in 1971). In fact, it was so successful, a remake (written by Paul Schrader, starring Al Pacino or Christopher Walken) was mooted, but never made. Possibly because it was such a tough act to follow.

In Investigation of a Citizen Above Suspicion, a policeman is the murdering criminal leaving clues for his colleagues. But both movies examine and critique their country’s legal institutions in compelling ways.

Interestingly, despite the fact that it combined spaghetti western influences (it starred Gian Maria Volonté, featured music by Ennio Morricone, and followed a lead character with no name) with a violent critique of the police, Investigation of a Citizen Above Suspicion is rarely named when the poliziotteschi genre is discussed.

Perhaps that’s because Investigation… doesn’t have the important action beats required by the genre, which No, the Case Is Happily Resolved most definitely does.

More likely, the cinematic gatekeepers probably don’t want to lump such a critically acclaimed movie with the fun and frantic poliziotteschi movies, that are normally filed under ‘trash cinema’.

Either way, No, the Case Is Happily Resolved takes its inspiration and transforms it into an entertaining thrill-ride, maintaining the deep darkness at its core. 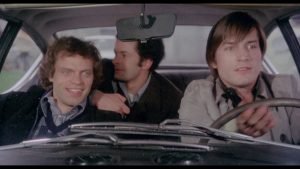 Speaking of darkness, our next chronological poliziotteschi takes its lead from one of the darkest movies ever made. A Clockwork Orange is Stanley Kubrick’s take on Anthony Burgess’ take-down of the stagnant state of the middle-class, with the Savage Three investigating the same themes, with a similar standard of the old ultra-violence.

Savage Three follows the savages of the title: three young men with good jobs at a computer analysis company, who spend their evenings having (increasingly deranged and dangerous) fun. To say any more would spoil the journey, but let’s just say this one escalates in a fairly disturbing way.

Breaking the poliziotteschi template to follow middle-class criminals who commit crimes for entertainment (as opposed to working class crooks who break laws to survive) Savage Three might not have the future-retro style of A Clockwork Orange, nor does it have the literary aspirations, but it does have the same bitter satire, with the gang’s charming psycho leader frequently feeling like Alex DeLarge’s brother from another mother. 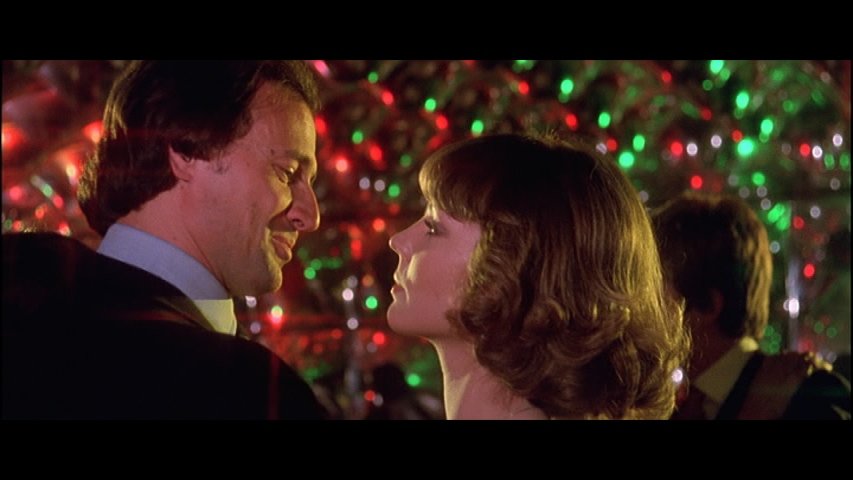 Attempting to do for the Colt 38 what Dirty Harry did for the 44 Magnum, Special Squad imagines what it would be like if Death Wish (1974) had starred Clint Eastwood instead of Charles Bronson.

The film follows a cop whose family is slain by a gangster named The Black Angel, with the cop forming a vengeance-driven gang of gun-slinging plain clothes Serpicos to slay The Black Angel in cold (and violent) blood.

For a further Eastwood connection, look no further than the director: the brilliant Massimo Dallamano, the former cinematographer behind Leone’s camera for A Fistful of Dollars and For a Few Dollars More. 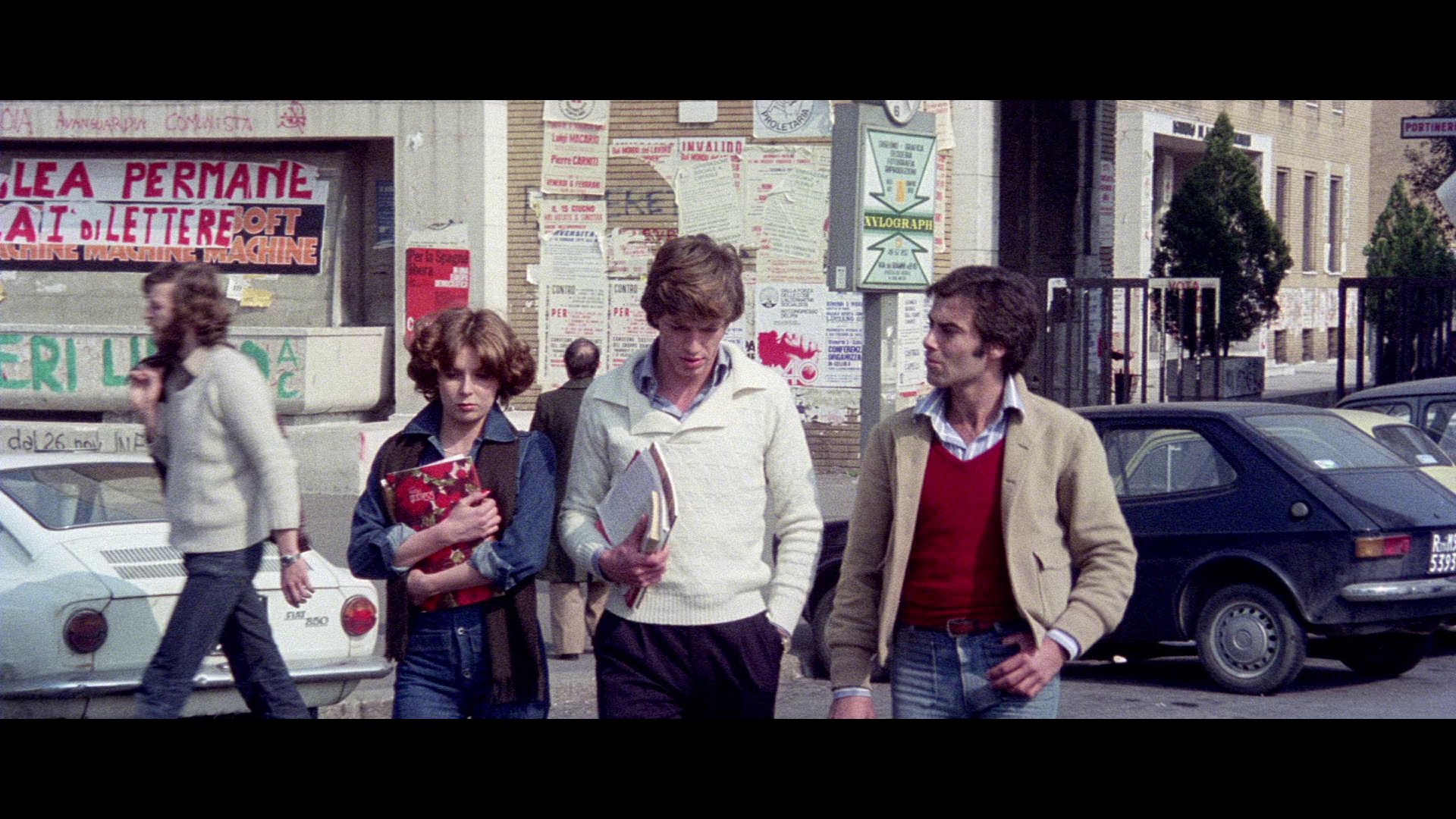 It’s to Arrow’s Years of Lead’s extreme credit that it includes both Savage Three and Like Rabid Dogs, as both are relative anomalies within the poliziotteschi genre – but both have a Marxist eye in the way they look at the class war raging on Italy’s streets throughout the ‘70s.

As with Savage Three, the well-off are the true villains; with a gang of spoiled nihilists, protected by their privileged parents, going on a series of extremely violent rampages – for no reason outside of boredom. It features the kind of wrong place / wrong time victimisation that’s more reflective of true violence – which, in real life, is chaotic and indiscriminate.

Tonally, Like Rabid Dogs feels closest to Straw Dogs’ class conflict (as is hinted by the title) – they’re both similarly filtered through humiliation and control. In both movies, the psychological torment impacts the audience almost as much as it does the characters.

Probably the sleaziest selection in this set, you’ll probably want to follow it either with a cold shower, or the next chronological Years of Lead movie, which is a lot less heavy, and will definitely take the edge off the experience. 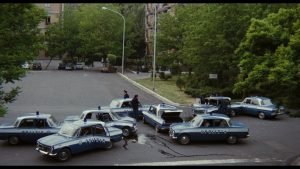 Streets under siege in Highway Racer (1977)

Lighter in tone than the traditional poliziotteschi, Highway Racer has more gags than it does gag-inducing violent deaths. That’s because it came at the tail-end of the movement, when screenwriters had started to deconstruct the genre (in response, in part, to the accusation of ‘fascistic’ undertones, a label that also plagued the Dirty Harry series).

Easily the most giddily entertaining film in the set, Highway Racer takes The French Connection’s hugely influential car chase sequences, and constructs an entire plot around them, following the misadventures of speed-freak cop chasing a race car driver who enjoys busting banks (as much for the thrill of the ride afterwards as the money).

Somehow, the script finds space between descriptions of tyre-squeals to build characters you care about, which makes the stunts (which were clearly super dangerous – for real) even more intense and involving.

Basically, if you love The French Connection (a film in which the car chases were shot in real traffic without permission, which might be the most Italian element of the whole project) – or even the Fast & The Furious franchise – welcome to your new favourite movie.

The Demonic Possession of Dementer