The giallo films of Sergio Martino are frenzied webs of gaslighting and sexual promiscuity, all stained a glittering blood red that flows from a seemingly endless parade of perversely satisfying murder vignettes. An essential filmmaker who brought a unique, dazzling dimension to giallo cinema, Martino’s films are broadly considered up there with the best that the category had to offer, and for good reason. Beginning with The Strange Vice of Mrs Wardh in 1971, Martino’s last concrete dalliance with giallo would be the 1999 made-for-television movie Mozart is a Murderer. In between, he would make a number of giallo movies so iconic as to position him comfortably in the pantheon of the filone’s greatest directors, from Dario Argento to Umberto Lenzi, Mario Bava to Lucio Fulci. These include The Case of the Scorpion’s Tail (1971), All the Colors of the Dark (1972), Your Vice is a Locked Room and Only I Have the Key (1972), Torso (1973), The Suspicious Death of a Minor (1975), The Scorpion with Two Tails (1982), and Private Crimes (1993). The Case of the Scorpion’s Tail, Your Vice is a Locked Room… and The Suspicious Death of a Minor can be found on The Sergio Martino Collection from Arrow.

As vividly illustrated with the release of the The Sergio Martino Collection which features three of his finest giallo offerings, Martino’s donations to the category are as playful as they are captivating.  Across these films and his others in in the category, Martino would stretch the limits of giallo film into archaeological horror, proto-slasher cinema, Edgar Allan Poe adaptation, poliziotteschi, satanic cult conspiracies and good old fashioned murder mysteries. Looking at a number at gialli from earlier in his career in particular, across these examples are reflected many of the core themes, aesthetics and general fascinations of giallo cinema during this period more broadly. As the brilliant Kat Ellinger notes in her essential book on the filmmaker’s work All the Colours of Sergio Martino, “Sergio Martino’s films in the genre arrived in the midst of the peak years, during a volatile cultural climate and an Italian film industry which was changing at a rapid pace as the restraints of censorship started to break down”. Across his films from the early 1970s especially, those tensions and anxieties come flooding to the surface in a range of different ways that, regardless, collectively still reflect the world giallo film of this period was somewhat ambivalently reflecting in its own strangely refracted, heavily stylized manner.

Most immediately, Martino’s early giallo films tended to steer clear of the male-centred stories which exploded in popularity when Dario Argento redefined the category with his blockbuster early 1970s triple-whammy Animal Trilogy with The Bird with the Crystal Plumage (1970), The Cat O’ Nine Tails (1971) and Four Flies on Grey Velvet (1971). While Martino and his producer brother Luciano flourished in an industry where Argento’s very much more dude-heavy giallo films created such a stir, aside from being extraordinary films in their own right– while they weren’t exactly unique on this front, as Ellinger notes – at their best, Martino’s gialli centred largely on women. Amongst them, one woman in particular stands out: Sergio’s sister-in-law and Luciano’s wife, Edwige Fenech. 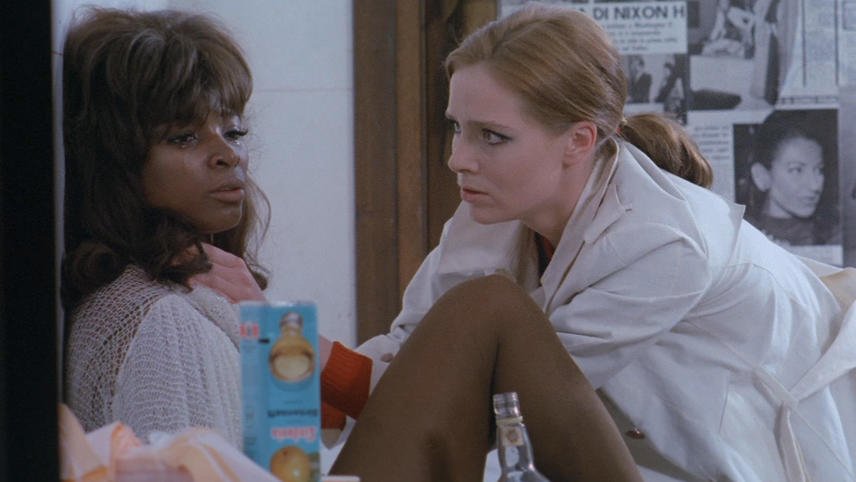 In Martino’s last giallo, he combines elements of the emerging poliziotteschi genre

When combined with their frequent collaborator, screenwriter Ernesto Gastaldi, it was the collaborative magic between this team that when combined resulted in not just some of Martino’s best gialli, but some of the best films in the category full stop. In the case of Fenech especially, it was from The Strange Vice of Mrs Wardh onwards that she gave a number of Martino’s most well-known giallo films their defining spark. As that film’s title character, Fenech’s Julie Wardh is a troubled yet wealthy woman who has married a conservative businessman in an attempt to escape the masochistic sexual tendencies of her past that saw her in a physically and emotionally abusive relationship with her sadistic ex-lover Jean (Ivan Rassimov). With a title lifted from one of the more gloriously excessive lines of dialogue from this early film, Fenech would return in Martino’s Your Vice is a Locked Room and Only I Have the Key. Starring Anita Strindberg as another woman in an abusive intimate relationship, the ongoing trauma Strindberg’s Irinia suffers at the hands of her drunk writer husband Oliviero (Luigi Pistilli) leave her desperate and frantic in their decrepit old mansion. It is only with the arrival of Oliviero’s vivacious and sexually autonomous Floriana (Fenech) that Irinia finds comfort and intimacy. But as a series of murders plague the house, the ghosts begin to emerge – both figurative and, at times, seemingly literal – hurtling the movie towards a violent, shocking climax.

Between these two films, Strindberg also starred in Martino’s The Case of the Scorpion’s Tail, a film in which Fenech is a notable absence as she was busy with the birth of her and Luciano’s son. Beginning with Ida Galli’s Lisa Baumer inheriting a large sum of money when her husband dies in a plane crash, when she demands to take the money in cash and stirs the interest of her husband’s insurance company, her dramatic murder leads a string of people – Interpol, local police, an insurance investigator and a journalist into the complex web of Baumer’s life in an attempt to solve the mystery. Played by George Hilton and Strindberg respectively, a romance blossoms between the insurance investigator and the journalist which only escalates in seriousness. The stakes are raised as the killings continue, and a tiny gold cufflink shaped like a scorpion seemingly their only tangible clue.

Fenech returned in full force in All the Colours of the Dark, working again with the Martino brothers, co-writer Gastaldi and her co-stars from The Strange Vice of Mrs Wardh, Hilton and Rassimov. A supernatural-edged giallo, Fenech here again plays an emotionally unstable woman, this time drawn into a satanic cult and Black Masses which are revealed to be much more closely linked to traumas related to her family – including the murder of her mother when she was a child – than she (or we) may have ever guessed. A lush, vibrantly coloured baroque nightmare, between the excesses of both its visual style and hysterical plot and Fenech’s unceasing ability to hold it all together through her always-bewitching on-screen presence, All the Colours of the Dark is not just one of Martino’s most beloved gialli, but a favourite of many die-hard fans of the category more broadly. 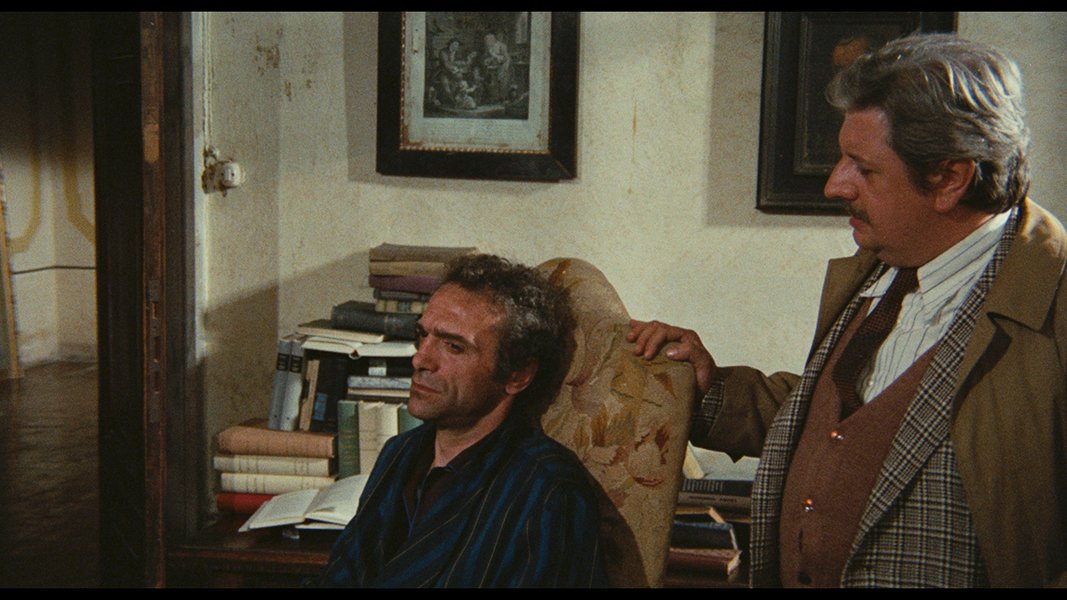 In Torso, as Ellinger notes, the numerous critics and scholars who have drawn a line between giallo and the later North American slasher cycle were bang on the money, as the similarities are hard to miss. With its serial killer action centred around a university campus and a cast of students including Jane (played by Suzy Kendall), who – with a few important tweaks to her character’s narrative trajectory – stars as a character that would evolve eventually into the oft-cited Final Girl. Notable for an amplification of violence when compared to his previous giallo films, its inescapable parallels with later slasher films are undeniable.

By the time Martino arrived at The Suspicious Death of a Minor, a more hybridised approach to the giallo film became apparent as it blends comedy with the poliziotteschi film that was booming in the mid-1970s.  Gone here too was Martino’s focus on women central characters, shifting, instead, to the always-enigmatic Claudio Cassinelli as Detective Paolo Germi whose investigation into the murder of a young girl he randomly after she is murdered, which leads to the discovery of a human trafficking paedophile ring. While not Martino’s last engagement with giallo, by this time it was apparent that so many of the other genres he worked across during his lengthy career – Spaghetti Westerns, commedia sexy all’italiana, poliziotteschi, melodramas, cannibal films, and the like – were garnering the bulk of his filmmaking attentions, rendering the heyday of his giallo output very much specific to the early 1970s. But – along with Fenech especially – those films continue to electrify and entrance audiences, making him one of the true directorial superstars of giallo cinema and a cult film legend.