You’ve seen the name, you’ve eyeballed the box-set — but working out where to start with Shaw Bros. can be intimidating even for the most dedicated cineaste.

The powerhouse film studio was established in 1958 by four Shanghai-born siblings (Runje, Runme, Runde and Run Run Shaw), who modelled it on the classic Hollywood system — even going so far as to mimic Warner Bros.’ iconic name, logo and fanfare. Actors and directors were tied down to long-term contracts and expected to work continuously, ensuring that features were churned out as if Movietown (the company’s titanic Clearwater Bay studio lot, the biggest of its kind in the world when it was completed in 1961) were a factory assembly line.

The mighty stream of works that followed spanned multiple genres (including martial arts, comedy, fantasy, horror and even softcore pornography), usually filmed in a house style that combined bright colours, fast cuts and lots crash zooms, Shaw Bros. would thus come to dominate the East Asian marketplace during a period in which Hong Kong became known as “the Hollywood of the East”.

Up to 1,000 features were completed by the time Shaw closed production in 1987 — some of which can be found in Arrow’s lovingly restored Shawscope Volume One; many more of which will be found in the forthcoming Shawscope Volume Two. If you’re reading this then it means you’re probably in need of a hand to sort your Chang Cheh’s from your King Hu’s (and, indeed, your Liu’s from your Lau’s and your Lee’s). Look no further — here’s a guide for where to begin an epic Shaw Bros. adventure.

While most of the heralded Shaw filmmakers were held down to long contracts, one of the most studios most influential films actually came from a director who departed immediately after its completion due to creative conflicts with producer Run Run Shaw.

King Hu would go on to become a master of wuxia (martial arts fantasy) cinema, helming classics like A Touch of Zen, Dragon Inn and Raining in the Mountain in the years that followed his breakthrough feature Come Drink With Me — a major hit that ended up being Hong Kong’s official submission for the Oscars in 1967.

The film is the tale of a female warrior (Cheng Pei-Pei) and a drunken beggar (Yueh Hua), who come into conflict with a group of villainous bandits — and it set a new precedent for martial fantasy cinema with its fusion of breathtaking wide-shots, sword-fighting action and a spaghetti western attitude. The film’s legacy can be traced at least as far as Ang Lee’s 2000 Oscar winner Crouching Tiger, Hidden Dragon — which stars Come Drink With Me’s Cheng Pei-Pei as its villain.

A breakout film both for director Lau Kar-leung and 23-year-old star Gordon Liu — and a clear influence on training montages films like Rocky and The Karate Kid — The 36th Chamber of Shaolin is also notable for its unique legacy in American hip hop history.

The story of a young Shaolin disciple who rises up against a brutal Manchurian regime, The 36th Chamber of Shaolin was a favourite of hip hop producer RZA — who would regularly skip school to watch double- and triple-bills of Shaw Bros. films as they screened at his local New York theatres. He found an affinity with the oppressed underdog played by Liu — feeling that his struggle resonated with those of Black persons in America during the civil rights movements.

RZA was inspired to take up martial arts himself thereafter, and would even credit some of his songwriting style to the short, sparse musical cues that punctuate so many of Shaw Bros.’ classic martial arts works. Wu-Tang Clan‘s 1993 debut album ‘Enter the Wu-Tang (36 Chambers)’ — a portmanteau of Enter The Dragon and The 36th Chamber of Shaolin — would later be considered one of the most influential hip hop records of all time, and samples from the English dub of the latter would subsequently work their way into Method Man’s 1994 track ‘Meth vs. Chef’, and Ol’ Dirty Bastard’s 1995 ‘Intro’.

Lau Kar-leung was one of the Shaw Bros.’ main fight choreographers in the ‘60s — a period during which he developed a close working relationship with director Chang Cheh on films such as The One-Armed Swordsman (1967). After the wide success of The 36th Chamber of Shaolin, however, Lau would become one of the studio’s quintessential film directors, frequently casting the aforementioned Gordon Liu — his adoptive brother — in the lead in a succession of martial arts and comedy classics thereafter.

Such is the case in Dirty Ho, in which Liu plays a Manchurian prince in disguise opposite Wong Yue’s titular jewel thief — with the two forming something of an odd couple who train and battle against dagger-footed cronies, caped Mongolian warriors and “the Handicap Four” in a brilliant succession of footsie fights and lethal face-offs. More than just a brilliantly choreographed fighting film, Dirty Ho also offers impressive cinematography and production design — with the opening scenes aboard a floating drinking den in the city’s pleasure district particularly memorable for their vivid colours and richly decorated sets.

Lau was also responsible for perennial Shaw Bros favourites including The Eight Diagram Pole Fighter (1984) and Heroes From the East (1978), and also directed Jackie Chan in cult classic Drunken Master II (1994). Liu’s legacy, meanwhile, would be compounded at the turn of the century after Quentin Tarantino cast him in two memorable roles in Kill Bill: Vol. 1 and Vol. 2. 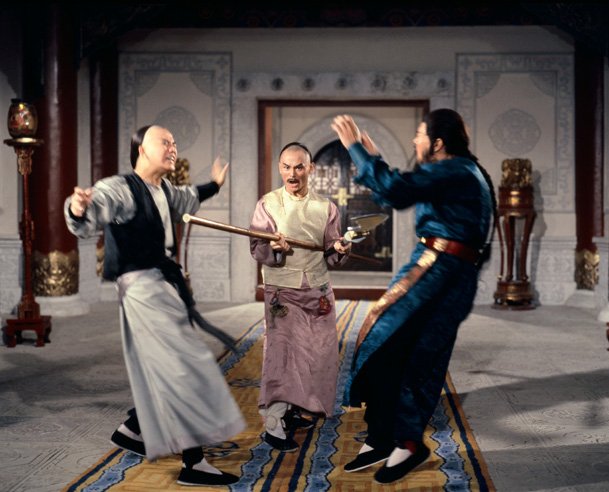 Two birds with one stone or two men with a stick and a spear? Dirty Ho (1979) addresses the more efficient method

Another favourite of Wu-Tang Clan’s RZA (who sampled the film’s audio in the classic track ‘Da Mystery of Chessboxin’’), was The Five Venoms.

The film opens in exciting fashion — with the five masked warriors of the Poison Clan introduced in a montage of colourful scenes that demonstrate their unique fighting styles. As respective practitioners of Centipede, Snake, Gecko, Scorpion and Toad-style combat, they each offer a unique threat to a young student tasked with hunting them down — in a plot that also concerns hidden treasure, deceitful double-crosses and a series of imaginative torture devices.

Such was the popularity of the film that the quintet of actors at its heart (Chiang Sheng, Lo Mang, Lu Feng, Sun Chien, and Phillip Kwok) would become known as the ‘Venom mob’, and they were often cast together in Shaw Bros. films thereafter. Of the five, Kwok is particularly notable — he played the villainous Mad Dog in John Woo’s 1992 Hong Kong action classic, Hard Boiled. Lo Mang, meanwhile, earned the nickname “the Shaolin Hercules” owing to his muscular physique — and later cropped up in several movies of the Ip Man franchise.

Politically incorrect title or not (and in fairness, not the only questionable Shaw work by modern-day standards), Crippled Avengers is a classic of the studio’s martial combat features — and perhaps the best to feature the iconic Venom mob.

Following a jaw-dropping opening in a fighting master (Chen Kuan-tai) finds his wife and son mutilated at the hands of a wicked invader, the film jumps forwards several years to depict the maimed child Chu Cho Chang (Feng Lu) as a rejuvenated adult with iron arm implants and a thirst for blood.

This vengeful father-and-son duo then proceeds to inflict blindness, deafness, and other physical and mental disabilities upon a group of four defiant young men (portrayed by four of the five members of the Venom mob) — who, in turn, become the handicapped heroes of the film’s title. Cue buckets of red paints, slow-motion camerawork, and some dubious acrobats as a battle of wits and senses ensues. 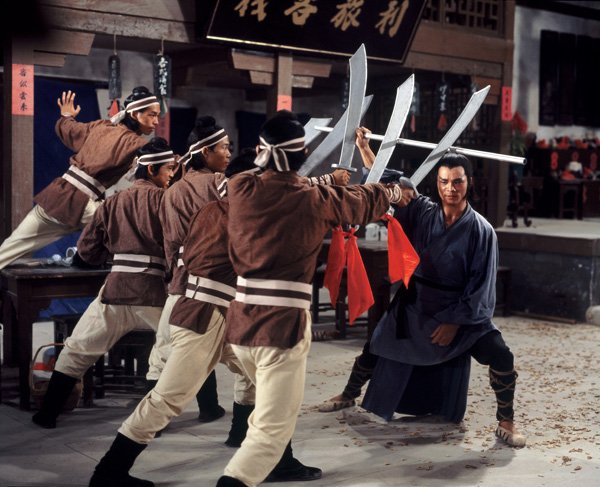 Though they may have comprised the studio’s most popular exports, Shaw Bros. wasn’t all kung fu fighting and martial fantasy. One of the studio’s most purely entertaining works was this barmy King Kong knock-off that aimed to capitalise on the success of the 1976 US remake.

The Mighty Peking Man is 90 minutes of unbridled man-in-a-suit mayhem, featuring a Tarzan-swinging jungle woman (Swiss blonde bombshell Evelyne Kraft), real tigers, and, of course, a very large ape on the rampage. It’s silly, it’s camp, and the special effects are bargain bin quality — but it’s an absolute joy to behold, and the very definition of a midnight movie.

The film was helmed by prolific director Ho Meng-hua, whose canon of 50-odd Shaw Bros. works also includes some of the studio’s best horror films.

Speaking of Ho Meng-hua, here’s another absurd highlight — about a physically disabled everyman who becomes a super-powered toxic avenger after reciting a magic spell and dousing himself in gunk. It ranks alongside the shocking Seeding of a Ghost (Kuen Yeung, 1983) and the supernatural and psychedelic Boxer’s Omen (Chih-Hung Kuei, 1983) as one of Shaw Bros. most memorable horror works.

The titular Oily Maniac’s mission, as he decides it, is to bring justice to all the baddies in the world — rapists, thugs and fraudsters included. He achieves this by sneaking up on them as an oily puddle, and then screaming as a musical cue derivative of Jaws plays out. It’s got all the ingredients of an exploitation classic: a bizarre monster, B-movie special effects, and an abundance of women who can’t seem to keep their clothes on.

Like The Mighty Peking Man, The Oily Maniac stars Hong Kong icon Danny Lee — who would later appear in John Woo’s The Killer and Ringo Lam’s City on Fire, as well as producing and directing Category III classics like Dr. Lamb and The Untold Story himself in the early ‘90s.

Between Light and Darkness: Martin Scorsese’s Most…