When we talk about Daiei’s early Gamera films, the discussion inevitably compares them to Toho’s Godzilla series. It’s true that Gamera emerged as part of the so-called ‘kaiju boom’ of the mid-1960s (1967 alone saw five theatrical Japanese monster films as well as Tsuburaya Productions’ Ultra Seven and Toei’s Giant Robo) and was indeed a box office rival to Godzilla. However, this has ultimately hindered Gamera’s reputation.

While comparison to Godzilla is understandable (and even historically necessary, at times), doing so robs the Gamera films of being seen and appreciated on an individual level. Moreover, given that Gamera’s primary audience during the Showa era was mostly children, the series has often faced unkind criticism (even from fans) who seem to look down on children’s media.

Divorcing Gamera from Godzilla, and in appreciating the films individually, Daiei presents us with a remarkably varied and unique filmography. Furthermore, when their target audience is considered as a part of these films (and not as a hindrance), there’s wonderful entertainment to enjoy.

Aside from the demonstrably grimmer tone of 1965’s Giant Monster Gamera and its immediate sequel, Gamera vs. Barugon (1966), the Showa-era Gamera films are unabashedly light-hearted. Above all, extending through Gamera’s twelve-film lifespan, is Gamera’s distinct characterisation. Often called the ‘friend of all children’, Gamera captures a triumphant feeling unlike any other on-screen monster. From his heavily anthropomorphised demeanour to his sillier antics of gymnastics and spinal-xylophone performances, the Gamera of the ‘60s and ‘70s is as much a character as any of his human co-stars. 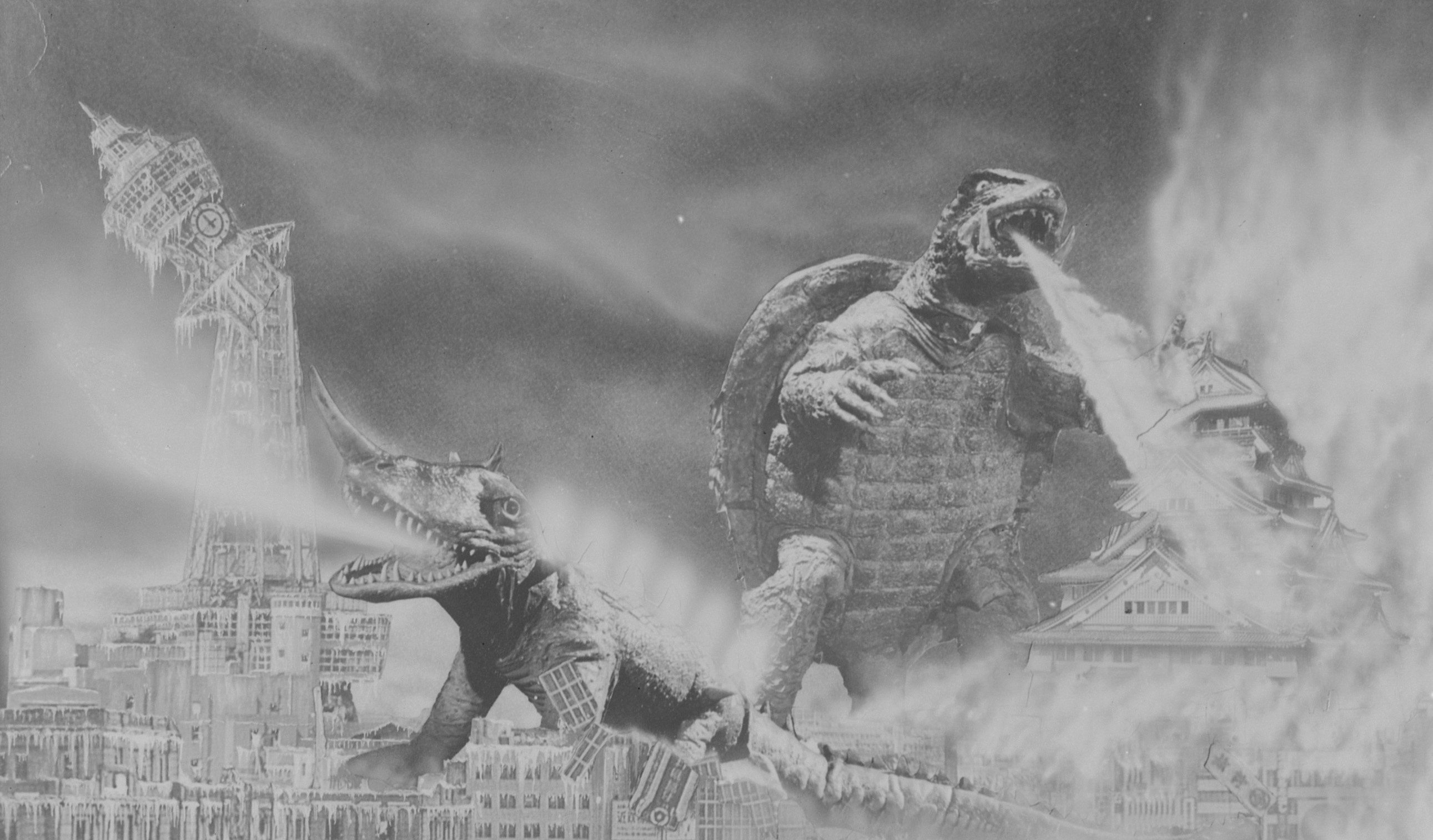 Obviously, whether Gamera’s palpable character appeals to most is a matter of taste, but it’s important to recognise just how influential Godzilla has been in affecting how audiences perceive him. Ishiro Honda’s 1954 Godzilla is a masterpiece of emotional and historical significance and deserves its praise. However, the pedestal on which critics and academics have placed it has near-damned the rest of the series. Despite the wit and sharpness of Shinichi Sekizawa’s script for Mothra vs. Godzilla (1964) or the comradery of Nick Adams and Akira Takarada in Invasion of Astro-Monster (1965), many have claimed that the Godzilla sequels are inferior imitations of the 1954 original. Such a view seems drawn from a belief that these films fail to live up to the thematic prowess of the original, and nuclear allegory becomes the benchmark by which they are scrutinised. This, however, leaves no room for consideration of the sequels’ merits – such as those mentioned above. Entertaining and earnest Godzilla films are cast aside with ease because their primary focus is not in exploring the horrors of nuclear war.

Regarding Gamera, a proxy expectation has developed. If we accept that most of Godzilla’s sequels are helpless against critical expectation and that 1954’s Godzilla has become the gold standard of Japanese monster cinema, Gamera fares even worse – especially when most see him purely as Godzilla’s box office imitator. While it’s true that Gamera arose in part from the success of Godzilla, we won’t truly be able to appreciate what Daiei’s monster has to offer until we stop projecting what we expect of Godzilla films onto Gamera.

1954’s Godzilla is a remarkable, landmark film. However, it should not be seen as the be-all, end-all of what Japanese monster films can or should be. Once one considers that Gamera’s wild adventures represent different possibilities for – and not deviations from – the sub-genre, then we can see Gamera’s films as entirely unique.

Take 1969’s Gamera vs. Guiron for example. Two young boys find a spaceship in the woods near their homes. Climbing aboard, the boys are hurtled through space when the ship takes off. They land on an alien world, one seemingly besieged by a space-venturing variant of the monster Gyaos. A knife-headed beast appears to fend off Gyaos, and the boys soon meet two alien women – who are determined to eat their brains! It is a weird and wonderful film that is genuinely enjoyable in how fantastical it’s willing to go. Due to Gamera’s characterisation (and a surprisingly healthy degree of on-screen blood), we genuinely want to see him beat Guiron, and that emotional reaction alone is fascinating. 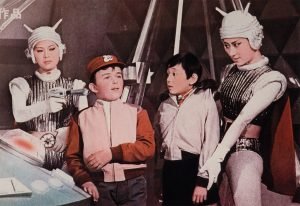 Indeed, the sheer audacity to have a giant monster with a knife for a head is as impressive as it is humorous. It’s important to remember the humour in these films, and indeed that films like Gamera vs. Guiron were aimed at children.

Often, the idea that a film or programme is aimed at children immediately makes one reassess it; often choosing to see it as a lesser work. An assumption is made that children’s media is automatically less insightful, less nuanced, or less significant by virtue of being made for children. Not only does this insult the intelligence and perception of young audiences, but it also misses the brilliance to be offered in films such as Gamera’s ’60s and ‘70s outings.

That emotional reaction to Gamera in his fight with Guiron comes not just from his characterisation, but from the fact that he’s reacting to the two young boys cheering him on. Gamera’s personality is connected with his dedication to protecting children.  That a film aimed at children encourages us to look at a monster and see a hero, a friend, and an ally is remarkable. Japanese monster films consistently have us look at monsters with compassion and empathy, and Gamera has been at the forefront of the sub-genre’s emotional core. Sometimes, these messages are just as important for adults to enjoy as well as children. To think we’re above it seems, ironically, immature.

Gamera’s earlier outings may appear less impressive after one has watched the spectacular ‘90s trilogy from Shusuke Kaneko (who would go on to direct 2001’s marvellous Godzilla, Mothra, & King Ghidorah: Giant Monsters All-Out Attack), but coming back to them reasserts an innocence that is so often lost when audiences project expectations of hard-edged grittiness onto science fiction. Indeed, with the stylish from-the-ground look of Gareth Edwards’ 2010 Monsters, or even the found-footage thrills of Cloverfield (2008), modern Western monster cinema has rarely delved into the realms of fantasy in quite the same way that Gamera did in the ‘60s and ‘70s.

While Godzilla has returned to our screens on both sides of the Pacific from 2014 onwards, Gamera’s cinematic future is uncertain. One hopes that, should he return, the affection inherent to his earliest outings (traces of which are still found in the ‘90s trilogy) reappears as well.

If you’re diving into the Gamera series for the first time, let go of what you look for in a Godzilla film, and appreciate the joys that children’s cinema can offer. Allow yourself the excitement that can be had when you share a connection (with a titanic terrapin) almost impossible in any other genre. The wonderful world of Gamera awaits.

You can dig into the Gamera films via ARROW, as well as on Blu-ray with the Showa and Heisei era boxsets.