Though the western will always be synonymous with the United States, many American efforts particularly from the 1950s, have not aged well. They were often too clean, too epic and too lost in a history which never really existed. Aside from grittier outings such as Ford’s The Man Who Shot Liberty Valance (1962), Hollywood would have to wait till the end of the 60s to get a full-blown revisionist bloody masterpiece in the guise of Sam Peckinpah’s critically acclaimed The Wild Bunch (1969). Yet, while other countries of course, have also provided versions of this unique gun-slinging sub-genre, only Italy has really been able to take this violent foreign subsect of cinema and make it entirely its own.

Roughly speaking, the ‘spaghetti western’ was essentially born in the mid 60s. So-called because they were made by Italian filmmakers, these relatively cheap productions often featuring Hollywood cast offs, blew holes in what had gone before, giving the genre a sharper, more modern zest, and of course a heap of freshly gunned down bodies. 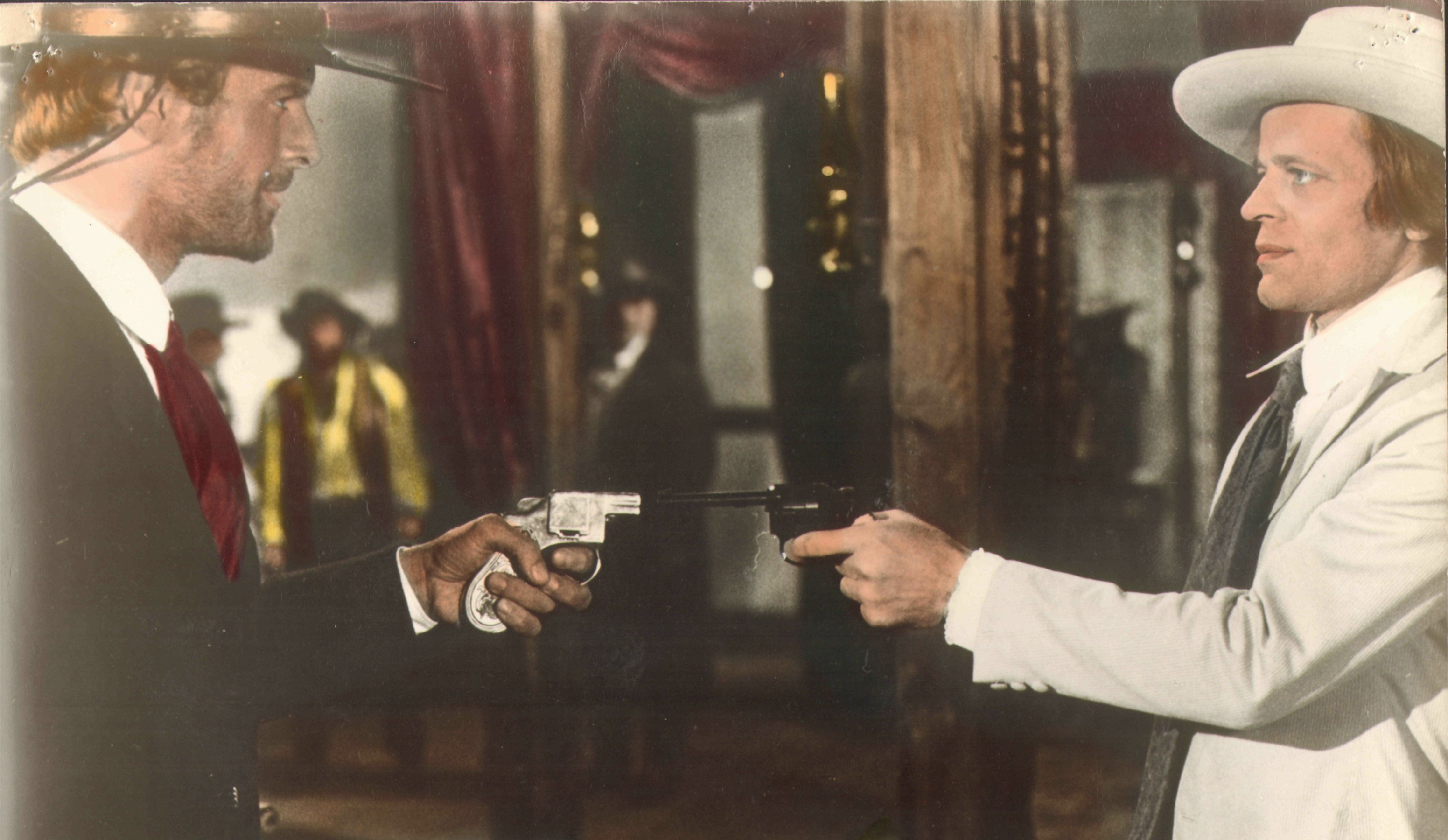 An old fashioned face-off: Sartana (Gianni Garko) comes up against Hot Dead (Klaus Kinski) in I am Sartana, Your Angel of Death (1966)

A Fistful of Dollars (1964), Sergio Leone’s classic, starring a then unknown Clint Eastwood, was able to subvert a once scared area of cinema, bringing a distinctly continental approach to the proceedings. With its custom brand violence and nihilism, it would provide the template for much of what followed in terms of Italy’s take on that particular style. Though, like other countries, Italy had been producing westerns since the silent days, Leone delivered something new. Part-financed with German money and filmed in Spain, this Italian production provided the perfect storm of dust, lust and blood-soaked exploitation. Beautifully presented; and scored by the delicious ghost themes of Ennio Morricone, Leone’s movie was a brutal yet sophisticated tale of death and retribution stripped of any sense of American heroics.

‘I had seen a lot of Westerns but I hadn’t liked many of them a lot. I found some interesting, especially Ford’s films. Only in all of Ford’s work, especially when he began, there is an abundance of optimism, whereas I have approached Western film making with a kind of pessimism. I wanted to make a Western seen by the eyes and through the eyes of a European.’ – Sergio Leone

But while Leone arguably provided the building blocks, in many ways, what came directly afterwards, was often just as good if not better and would fully cement the tropes and motivations of the newly born spaghetti western.

Features like A Pistol for Ringo (1965) provided the archetypal anti-hero. The movie’s protagonist, a catalyst gun slinging forerunner to Han Solo, was a suave, handsome reprobate more adept at weighing up profit than grappling with the ethics of morally dubious warring factions. Starring Guiliano Gemma, and directed by Duccio Tessari, it was a cool, assured highly entertaining romp. 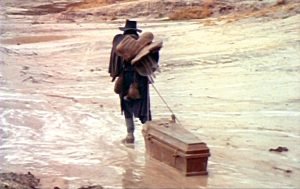 Yet, while Pistol had offered us a cheeky, well-dressed vision of the outlaw, Tessari’s immediate follow up, The Return of Ringo (1965) gave us a more nuanced outing in a fascinating change of tone. This time, far from being the twinkly-eyed criminal of Pistol, Gemma portrays Ringo as a dishevelled Civil War vet. Coming back to his home town to discover it has been decimated by political corruption, he readies himself to take on the officials and bully boys who have ushered in this wave of destruction.

In many ways The Return of Ringo, a much grittier affair than its predecessor, is a pre-curser to many of the American Vietnam war films which would dominate the eighties. And while, Tessari was of course, not intending to make a modern film about war time PTSD or related issues, the film’s similarities to Ted Kotcheff’s First Blood (1982) are more than striking.

And if we needed a signifier that the focus of the Italian western was not the white-hatted hero of the past, then it surely comes with Sergio Corbucci’s Django (1966). Notoriously violent and banned in Britain at the time, Franco Nero plays the opportunist outlaw of the title. When we first come across him he drags a heavy coffin through the mud as he approaches a small ghost town. If ever there were none-too subtle hint that this sub-genre would be cynical, stylised and death obsessed, then look no further. It undoubtedly took a more European attitude to fully grasp the new cinematic potential of an outdated American idea.

Following in the footsteps of Eastwood’s deathly quiet cowboy in Leone’s Dollars trilogy, Django and Ringo, would not be the last leading men to ride out of the Spanish desert. Movies like Navajo Joe (1966), starring Burt Reynolds or the superb Sartana run of features and a host of others all threw their wide-brimmed hats into the ring in the hope of cashing in on past glories.

Many Italian directors, who would go on to be recognised in other genres, had earlier plied their trade in this arena. Lucio Fulci, Sergio Martino and Umberto Lenzi, perhaps all better known for horror, crime thrillers or cannibal films respectively, also helmed some impressively good westerns, including Massacre Time (1966), Seven Pistols for a Massacre (1967) and A Pistol for a Hundred Coffins (1968). 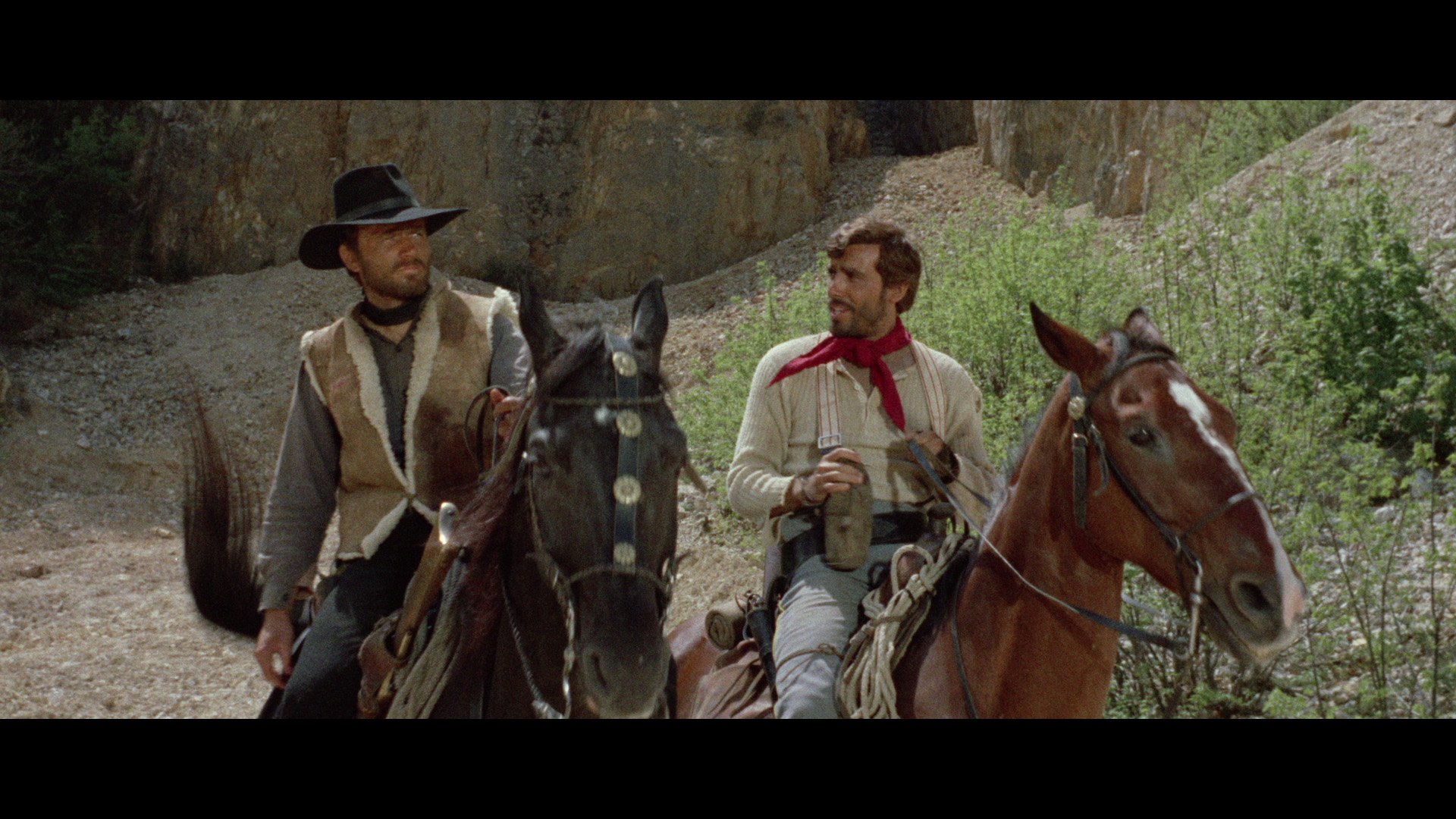 Though European stars like the aforementioned Guiliano Gemma, Franco Nero and Klaus Kinski would populate these Italian films, American actors quickly found themselves becoming part of this bloody, sun-baked genre. While Charles Bronson and Eli Wallach took up prominent roles in two famous Leone flicks, it would be Hollywood B-lister Lee Van Cleef who would provide much of the piss, vinegar and coolly efficient soul required for these wildly entertaining no-nonsense shoot-em-ups. Appearing in over a dozen spaghetti westerns most notably Day of Anger (1967) and The Grand Duel (1972), Van Cleef rode the wave of popularity like the experienced cowboy he was. Being around for the cultural inception when he starred in For A Few Dollars More (1965) he was one the few American talents to have stuck with it all the way to its ultimate late 70s demise.

The Italian western, often derided by more serious critics, is faster, cruder and arguably more violent than its American counterpart. But it is also less bogged down in patriotic rhetoric, thinly veiled racism and 1950s Hollywood hokum. The movies made by directors like Duccio Tessari, Sergio Corbucci and Sergio Leone, stand as sleeker European reflections of a stateside invention which had lost its way.

Unhampered by sentiment and uncomplicated by unnecessary romantic sub-plots, these films may have played to our more sadistic desires but they were also streamlined, highly stylised and occasionally beautiful. Those believing that the spaghetti western begins and ends with Leone’s trilogy need to take a closer look. Italian outlaws like Django, Sartana and Ringo offer not cheap knock-offs of US stock characters, but tragic, charismatic versions of an archaic design that was desperately in need of a continental make-over.