The very first sequence in Terry Gilliam’s illustrious (and ridiculous) filmography is one that could summarise his life’s work. A beautiful butterfly, dappled by sunshine, rests on a leaf. Then, from nowhere, a dirty great boot, on the foot of a traveller, comes crashing down to crush this poetic image. The butterfly (symbolic of freedom in literature), is destroyed by crushing reality. It’s beautiful, it’s gritty, it’s a subversion of expectations. It could have been taken straight from the animations he created for Monty Python’s Flying Circus.

But the shot isn’t just a fun reference to his obliterating Python foot, it operates as a perfect metaphor for Gilliams’ career as a whole, a career that is as grubby as it is pretty, as restricted as it is free, as shocking as it is comforting. The sequence appears in his debut, Jabberwocky, perhaps the closest companion for Time Bandits in his filmography. Both are children’s fairy-tales tinged with death and darkness. Both mix fantasy and history to create a unique tone. Both feature Michael Palin. Both are extraordinary. But of the two, only one is a masterpiece. And that movie is Time Bandits. 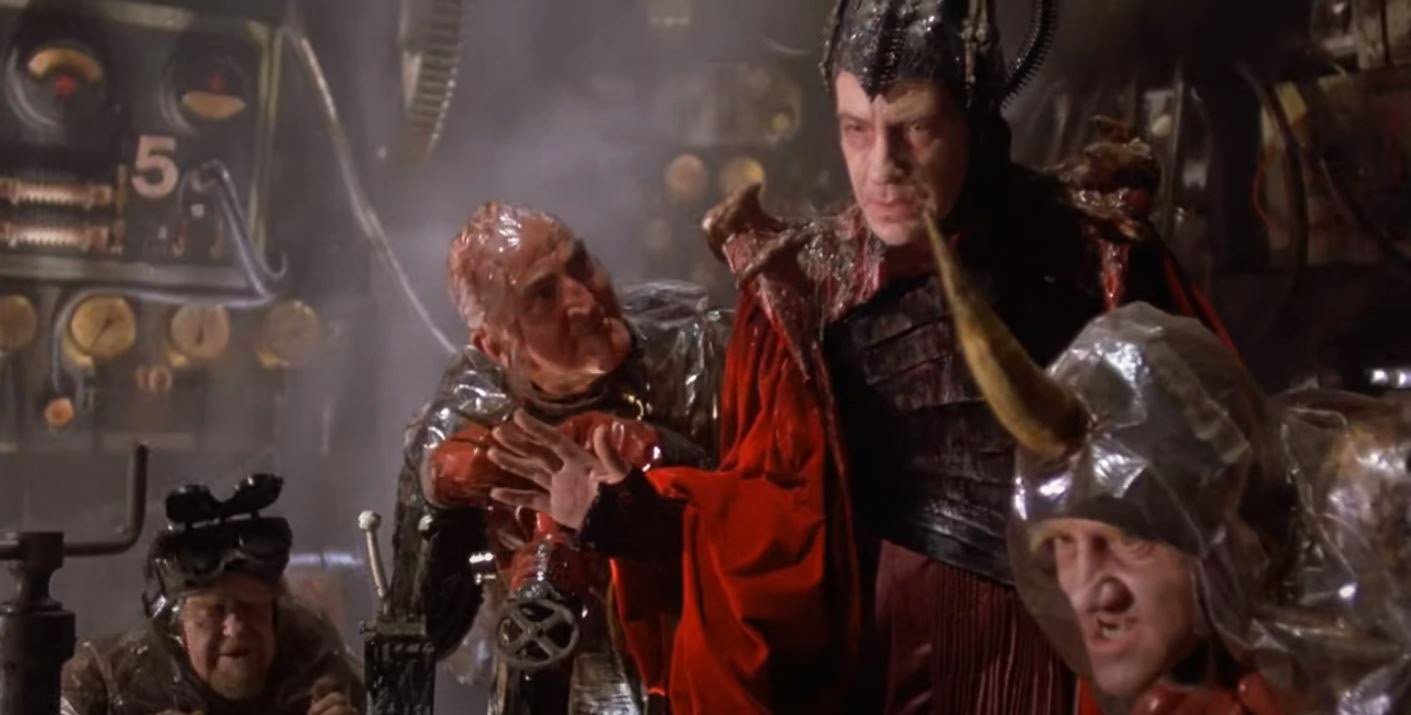 Time Bandits’ story sees eleven-year-old Kevin rescued from his humdrum existence (and tech-head parents) in two main ways. First, via his book-fuelled imagination. Then, by six time travelling dwarves who fall out of his wardrobe (after a knight on horseback bursts through it) with a stolen map, to drag him on an adventure across mythic-tinged history, encountering icons such as Napoleon Bonaparte, Robin Hood, and King Agamemnon along the way. Possibly influenced by the work of CS Lewis and L Frank Baum, definitely inspiring Labyrinth (itself co-created by Terry Jones, another Python), Time Bandits plays with fairytale tropes to birth a modern myth that feels as significant as Star Wars to its most passionate fans.

Taking the Spielbergian approach of telling a story aimed at kids from the kids perspective, Time Bandits’ form matches its theme (just because someone’s small, doesn’t mean they’re not significant) brilliantly. ‘I wanted to do this whole film from a kid’s point of view, making a child the hero. But I didn’t think that a kid could carry a whole movie, so I decided to put a gang around him, people the same height, and off it went, it just sort of grew from that,’ Gilliam said of his approach. 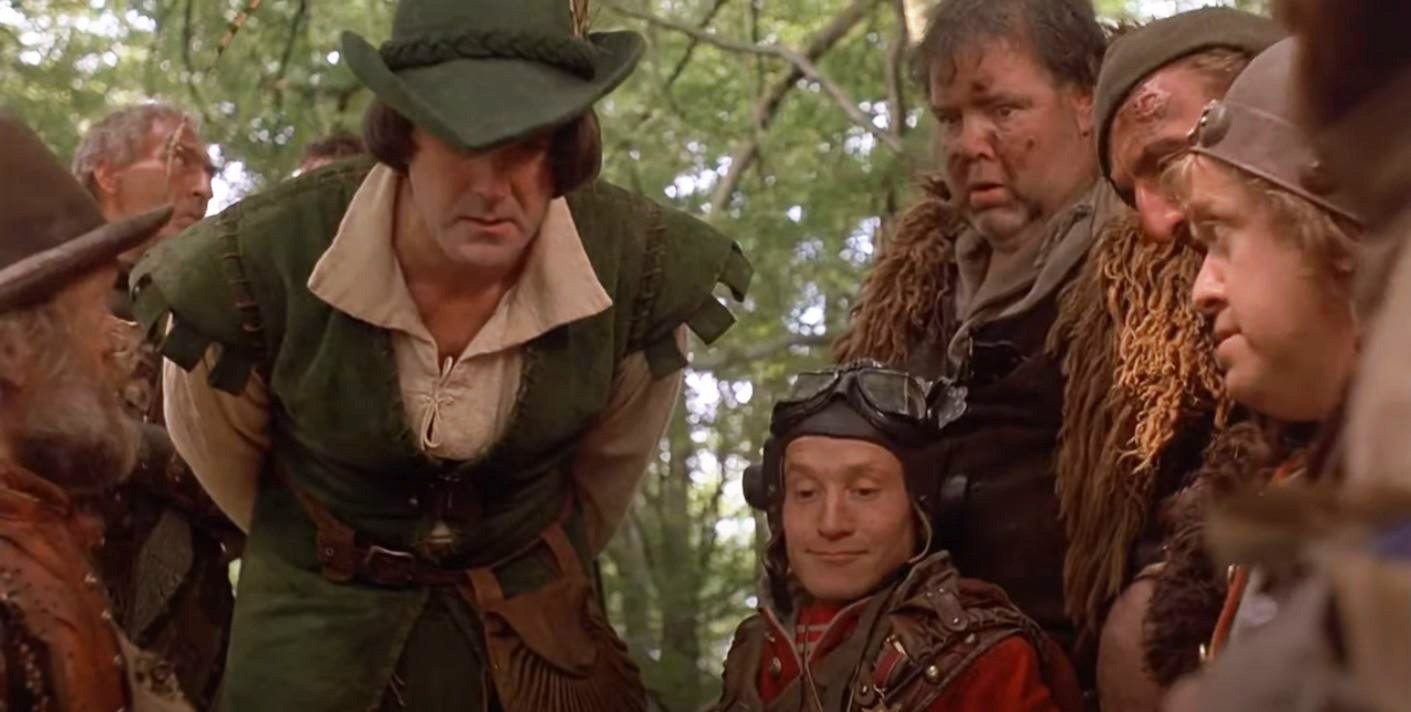 Populating the film with little people wasn’t just to carry the child lead, Gilliam was inspired by memories of his own youth. ‘One year, I did the freak show tent so I got to see all these extraordinary people sitting around being ordinary and it really fascinated me, so that stuck with me. I just love the idea of taking guys that are small and treating them like heroes, treating them like Alan Ladd, almost as tall as Alan Ladd, I think he was about three inches taller than those guys. That’s what the joy of doing it was and giving these guys a chance to get out of their fucking Womble costumes and R2D2 tin cans and be people. And they all rose to the occasion, they were all brilliant,’ Gilliam said.

That occasion only existed because Gilliam couldn’t get Brazil financed. Time Bandits was cynically written to create a box office hit that would give producers confidence in his actual passion project, Gilliam didn’t require Time Bandits to be good, just successful. Perhaps that’s part of what made it great.

And, of course, Time Bandits wasn’t completely pandering to the mainstream – Gilliam’s natural instinct to cause mischief led to his family movie ending with one of the darkest pay-offs in cinema history. Anti-authority to his core, Gilliam couldn’t leave his hero under the rule of his bossy parents, so their obsession with tech (shared with the big bad of the movie) leads them to touch a toaster infected by Evil, exploding in their shoes as a result. Kevin is left an orphan surrounded by the ruins of his former home, with only a handful of Polaroids from his adventures to keep him company. The twist caused controversy at the time, with audiences shocked at a downer ending that seemed to punish its hero for having a glorious adventure. But Gilliam set-out to make a fantasy fairytale, and those stories have darkness at their core, with most fairy tale protagonists suffering worse fates than the loss of their overbearing parents.
Speaking of overbearing situations, Brazil did end up becoming his next film (and that’s a whole other story), making Time Bandits the first instalment of a self-described ‘trilogy of imagination,’ which includes Brazil, and The Adventures of Baron Munchausen. All three concern the ‘craziness of our awkwardly ordered society and the desire to escape it through whatever means possible,’ according to the director. 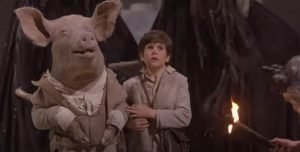 Kevin (Craig Warnock) and his porcine friend find themselves in trouble

Time Bandits is the best of all of them. Brazil is an incredible film, don’t get us wrong. The Adventures of Baron Munchausen, less so – though it still has its moments. But Time Bandits, a film made with its audience in mind, has arguably outlived both for that exact reason. It’s the dictionary definition of a crowd-pleaser. Large credit must go to George Harrison’s artist-focused HandMade Films, who let Gilliam win most of the creative arguments along the way (at a cost – it would be the only film the director would make for Harrison’s company, after the ex-Beatle compared Gilliam to John Lennon: and it wasn’t a compliment).

But, more significantly, Time Bandits’ childs-eye-view suited Gilliam’s own impish perspective more perfectly than the adult bureaucrats guiding us through the landscapes of Brazil, or the grown nobleman showing us Munchausen’s inner world. If the opening of Jabberwocky is the perfect encapsulation of Gilliams’ career as a whole, Time Bandits is Gilliam in film form. Funny, thrilling, and moving faster than its director can speak (very fast), it’s unabashed entertainment from start to finish, with the dark heart of an untranslated fairytale. Sometimes, it’s the throwaway projects that last. Sometimes, the butterfly escapes the boot.