There’s something about archaeology that is, if you excuse the turn of phrase, dead sexy. When you add horror cinema and all its lovely spooky iconography (all those skulls and skeletons and things that go bump in the night) it gets even better. Rendering the digging around in the muck to uncover the secrets of the past a literal source of horror, archaeology-themed horror films tap – be it consciously or subconsciously – into the conceptual guts of what makes the genre itself tick more broadly. As championed by big-brained horror academic Robin Wood in his foundational work in the field, Sigmund Freud’s concept of the “return of the repressed” is a central idea when talking about the genre; it’s the engine that drives the machine of some of the greatest horror films ever made. Just think about it: how many horror movies are about things from the past that we try to bury or deny that bubble up, breaking through the surface in powerfully messed up ways to wreak havoc in the present? The answer is, well, a lot. 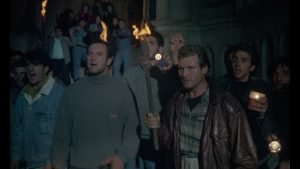 In archaeology-themed horror, this digging up of the past is made an explicit part of the story. One of the many unsung masterpieces by Italian horror maestro Lucio Fulci, his late-era 1990 film Demonia is a case in point. Keeping-the-tits-in-titillating, Demonia begins in the murky depths of a 15th century monastery in Sicily where angry locals strip and crucify five nuns they believe are witches. Leaping ahead to the film’s present day in Toronto, young archaeologist Liza (Meg Register) has a vision of this past atrocity during a seance just before leaving with a team led by Professor Evans (Brett Halsey) to search for Ancient Greek ruins in the nearby area. Met with open hostility by the locals in the small village of Santa Rosalia who are gravely superstitious and passionately protective of the monastery and the dark secrets it holds within, despite the Professor’s disinterest in that location Liza finds herself increasingly drawn to it – and the story of the orgy-having, baby-sacrificing, Satan-worshipping nuns who met such a nasty end there – as a series of mysterious murders begins to plague the town.

When watching Demonia, although all eyes naturally may be drawn to Fulci himself playing a charmingly crotchety Interpol inspector by the name of Carter, it’s the Santa Rosalia mayor who makes the link between horror’s broader thematic interest in the return of the repressed and the narrative details of this particular film most explicit. Warning Evans that he and his surveying team will not be receiving the support of the townsfolk, he notes the general attitude is that “the dead should stay dead”. Countering this with the little man-bitch plea “we’re not graverobbers!”, despite his best intentions Evans and his team regardless do disturb the status quo, opening a portal for the grimness of the past to come thundering into the present with suitably Fulci-esque vicious, violent repercussions, in all its resplendent guts, gore and glory.

Demonia of course was not the only time Fulci’s fascination with anthropology and anthropologists would make its way into one of his horror films; a notable precursor here, of course, is 1982’s Manhattan Baby. Here, an archaeologist from New York is blinded when his daughter is given a strange charm in Egypt, leading to an ancient evil (and notably racially exoticised) force finding its way into the urban metropolis. From Riccardo Freda’s Caltiki, the Immortal Monster (1959) to Marcello Avallone’s Specters (1987), archaeology-themed horror is certainly not unique to Fulci alone in Italian horror cinema, with Armando Crispino’s The Dead Are Alive (1972) a notable giallo with a similar central premise, this time with the added bonus of being accompanied by a banging score by Italian film composer legend Riz Ortolani.

And it would be remiss to imply that Italian horror is the only place where anthropology as a central narrative motif has flourished. Most famously, one need only look at those powerful early scenes of William Friedkin’s The Exorcist (1973) of Max von Sydow’s Father Merrin at an archaeological dig in northern Iraq where he discovers the wee little Pazuzu statuette, the very same demon that causes so much shenanigans in that particular movie. And, of course, archaeologists fucking around where they shouldn’t, tempting fate and allowing the repressed to return is central to the mummy film subgenre, with early iconic instances like the classics like Karl Freund’s Boris Karloff-centred Universal horror classic The Mummy from 1932.

From Ken Russell’s deliriously perverse The Lair of the White Worm (1988) to John Erick Dowdle’s more recent, Paris-set found footage horror film As Above, So Below (2014), archaeology-themed horror movies have endured throughout the genre’s history and show no sign of losing their appeal. Rarely given credit for its central place in this admittedly small and yet hugely compelling subgenre, it’s perhaps no surprise that Fulci’s horny nuns tend to steal the show and steer the film in the cult film imagination more towards the terrain of nunsploitation. But make no mistake, archaeology is central to this film, buried as deeply in its heart as the ugly secrets of the small town of Santa Rosalia itself.

Ju-on: The Curse and four other Y2K J-Horror movies…