The early ‘70s, says David Flint, author of ‘Satan Superstar’, could be called “the age of Satan.” Conspiracy theories were rife in the wake of the Kennedy assassination and the Watergate scandal. Hippies and other counterculture movements had given rise to broad new ways of thinking. And while the BBFC had erred on the side of caution when it came to content that could offend Christianity, a newfound receptiveness to alternative religious values opened the door for the Devil himself to make his presence known on-screen.

Enter The Brotherhood of Satan, a 1971 horror tale by Bernard McEveety that begins with a rather nice family holiday in the idyllic countryside of the American Southwest. Here, the mountains are tall and the ice creams thick and sweet — but before long, young couple Ben and Nicky, and Ben’s daughter K.T., find themselves contending with murderous dolls, roadside fatalities, and a malevolent coven that might spell the end of them

As an unconventional and independently-made production, The Brotherhood of Satan is a prime example of how a new trend of low-budget Satanic cinema would give rise to exciting new facets of horror filmmaking. More than this, the trend stoked the fires of a growing distrust of the “other”, particularly communities seen to be believers of non-standard values and beliefs — something further amplified in years to come in the wake of the People’s Temple and Waco tragedies. The Brotherhood of Satan, then, occupies a vital space in the emergence and establishment of the cult as cinematic menace of many a film plot.

The Brotherhood of Satan is as good a place to start as any on a journey through mysterious, nefarious and terrifying organisations — and with the cult of cults-on-screen only growing in presence in the fifty years since the film’s release, there’s much out there to explore. Here, then, are eight further tales of caution to consider before deciding to follow a bunch of robe-wearing acolytes into the woods. 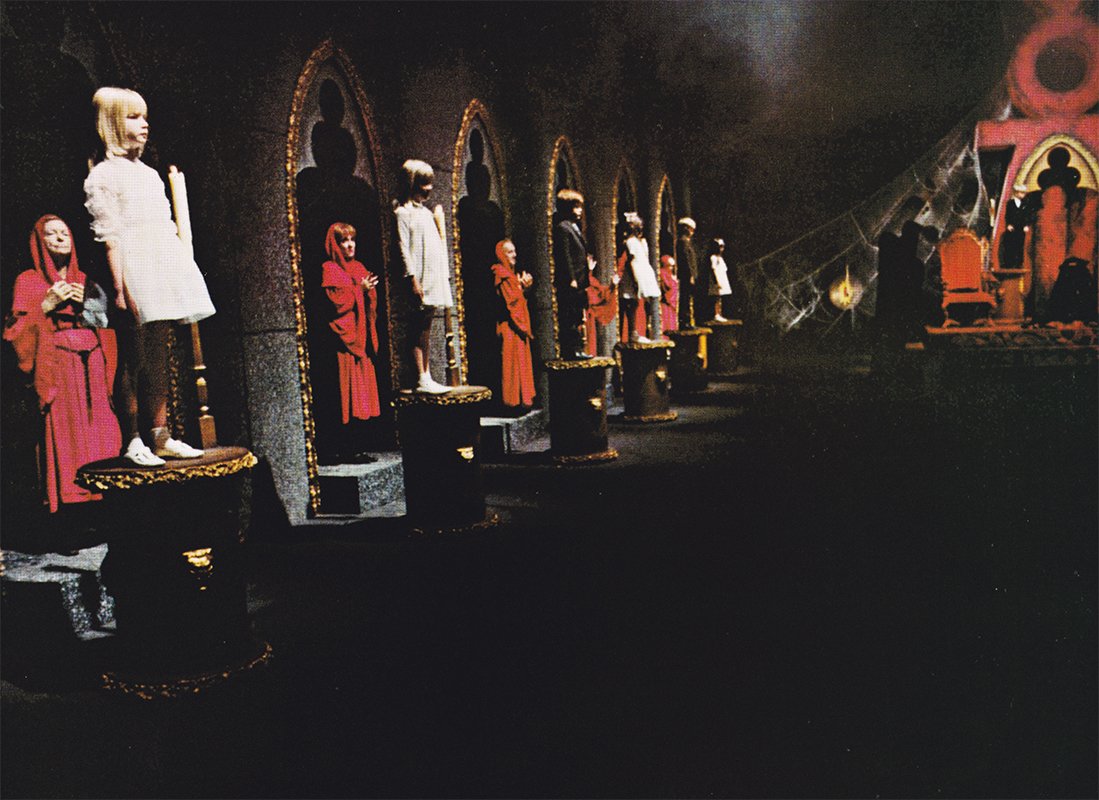 Nothing to see here, just your everyday devil worshippers hanging out in The Brotherhood of Satan (1971)

Rosemary’s Baby was, arguably, the movie that opened the floodgates for Satanism’s emergence in film in the ‘70s.

Here was the story of Mia Farrow’s Rosemary Woodhouse, a heavily pregnant innocent who moves into a large Manhattan apartment with her husband, defying rumours of its dark past. But it soon becomes clear that the couple’s elderly neighbours — so quick to welcome the Woodhouses to their new home — have an ulterior motive. They’re members of a wicked coven, and if they get their wish, Rosemary’s baby might soon be the property of the antichrist himself.

Roman Polanski’s Hollywood debut was a box office sensation, and the recipient of an Academy Award — though its producer, William Castle, allegedly came to believe that the movie was cursed. Within months of its release, 37-year-old composer Krzysztof Komeda died after an altercation at a party. Castle himself hallucinated scenes from the movie while recovering from surgery on gallstones, and never made a Hollywood hit again. And Polanski’s wife Sharon Tate was notoriously murdered by Charles Manson’s followers in the couple’s home in 1969, while she was eight-and-a-half months pregnant.

Cursed or not, Rosemary’s Baby‘s frightening legacy is a film-worthy prospect in itself — see Tarantino’s Once Upon a Time in Hollywood for evidence of that.

Edward Woodward’s puritanical police sergeant goes off on a jolly to investigate the disappearance of a young girl in the Hebrides, only to find the island townsfolk completely unaware of her existence in the first place. So whodunnit? As The Wicker Man’s infamous climax affirms, curiosity sometimes really does kill the cat — or, in this case, burns it alive inside a giant wooden effigy.

Christopher Lee’s guest performance as cult leader Lord Summerisle was reportedly his favourite of all the films he starred in, and he alone spent a considerable amount of personal time and money promoting The Wicker Man — despite allegedly working for free in the production. His passion proved fruitful. This low-budget British eccentricity, which exploited fears of isolated societies in the same manner as The Brotherhood of Satan or even The Hills Have Eyes, surpassed all expectations to become a bonafide horror classic.

The 2006 remake starring Nicolas Cage, meanwhile, has become something of a cult classic for entirely different reasons.

The film concerns Catherine, a young woman who has premonitions of cruel rituals after the deaths of her parents in a car crash. In what seems a caring deed, she is taken in by her cousin and uncle (the latter played by Hammer Horror legend Michael Gough, later known for his role as Alfred Pennyworth in the Tim Burton/Joel Schumacher Batman films). But in fact, the duo are necromancers determined to revive Catherine’s dead mother as the High Priestess of their coven — and Catherine is soon forced to fight for her life to avoid a fate worse than death.

“The murders were extremely important,” recalled writer David McGillivray. “They had to keep coming, and they had to be as gruesome as possible.” Indeed, with outstanding special effects and a knack for creativity, Satan’s Slave transcends its B-movie status to become something far more impressive, despite the nine cuts made by the BBFC.

The cult-like Zero Church in Sion Sono’s surreal opus Love Exposure is one of many plot points that make the bizarre adventures of upskirt photographer Yu so engrossing. But with their brainwashing antics, a façade of purity and happiness, and the deifying of an evil, high-ranking member named Koike (who carries a brightly coloured parrot around while meddling with Yu’s plans), this white-walled, ultra-modern cult serves as a refreshingly contemporary counterpart to the old-fashioned Satan-worshippers of the ‘70s.

The organisation riffs on the Church of Scientology, as well as the Japanese Aum Shinrikyo movement (also known as the Aum Supreme Truth) — infamous for the Tokyo subway sarin attack in 1995 that left 14 people dead and over 5,500 injured. The wider plot of the film, moreover, is rooted in director Sono’s own childhood of joining a Catholic “cult” in his young life after running away to Tokyo from his home in Toyokawa.

Strange organisations and cult groups, of course, are a key facet of Sion Sono’s chaotic oeuvre, with the self-sacrificing teens of Suicide Club another memorable cult of note. Eiji Uchida’s Love and Other Cults, meanwhile — another wild Japanese feature from Third Window Films — feels like a spiritual sibling to Sono’s four-hour masterwork; it follows the antics of a schoolgirl born to a religious fanatic, whose blissful life is disrupted when the leader of her commune is arrested.

Gareth Evans (The Raid) and Timo Tjahjanto’s Safe Haven segment of V/H/S/2 is only about 30 minutes long, but this found-footage horror is among the most horrifying and jaw-dropping depictions of Satanism out there.

A TV news crew infiltrates an Indonesian cult set within a school building-like temple, finding its walls adorned with spooky symbols and its rooms inhabited by women and children confounded by stupor. The crew divides, and as the cult leader announces a reckoning over the intercom, shit hits the fan via murderous zombies and gruesome, flesh-tearing demons.

Picture 28 Days Later crossed with John Carpenter’s Prince of Darkness, and you’re already halfway there to this intense and hellish gem.

“It’s not a cult, it’s a commune!” says Aaron, the youngest of two adult brothers returning to Camp Arcadia with starkly different beliefs over the true nature of the settlement they spent time with as children.

Aaron’s looking for closure. Leaving this harmless group of hippies brought him nothing but misery in his adult life, which he spends working as a cleaner with his brother. But for older, domineering brother Justin it’s clear: they’re a UFO death cult committed to mass, ritualistic suicide a la Jim Jones’s People’s Temple, or the Heaven’s Gate movement.

The reality-disturbing horror-mystery they eventually unravel, though, is something far more engaging than either prediction in this emphatic project by writer-director-producer-editor duo Justin Benson and Aaron Moorhead (who also play the lead roles). “The oldest and strongest kind of fear is the fear of the unknown,” an opening title plucked from H. P. Lovecraft had warned — and indeed, this is a film that will keep viewers theorising long after the credits have rolled.

Dani (Florence Pugh)’s in a tough place after the suicide of her sister results in massive emotional trauma, straining the relationship between her and her boyfriend, Christian. The only solution is to join him on a trip to the Swedish countryside, where all their problems will be solved by consuming psychedelic drugs at a once-in-a-century pagan celebration. The couple go home with a newfound appreciation of each other. The end.

…Or not. Turns out, this flower-adorned group of rustic weirdos enjoy human sacrifice, forced insemination and cruelly mimicking the screams of those upon whom such acts are inflicted. With an atmosphere that recalls another film on this list — The Wicker Man — Ari Aster’s follow-up to Hereditary revels in paranoia, before doubling down on shock and visual terror.

You’ll think twice about dancing around the Maypole after this one. 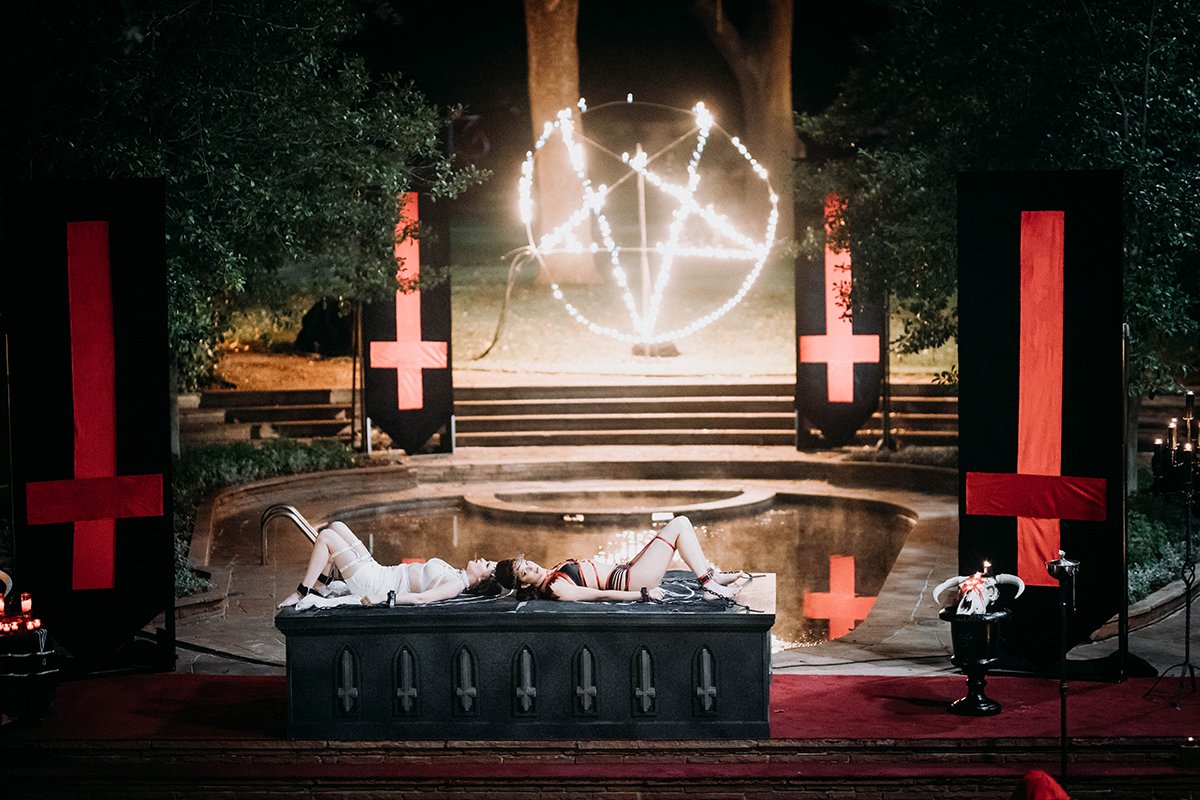 Are you really in a cult if there isn’t any sacrificing? Satanic Panic (2019) stays true to form

Inspired by devilish horror films like House of the Devil (2009), Race with the Devil (1975) and Deathgasm (2015), Chelsea Stardust’s indie horror-comedy succeeds both as a fun-filled, gory romp and as a satire of the real “satanic panic” films of the ‘70s.

When pizza delivery girl Sam encounters a stingy upper-class customer who refuses to tip for their order, she decides she’s had enough and storms into the middle of a party in an out-of-town manor. But it turns out that these conceited folk aren’t merely tight-pursed snobs; they’re worshippers of the “triple-faced fuck monster” Baphomet, and are in the market for sacrificing innocent virgins like Sam.

Our protagonist dodges Haxan cloaks, organ-munching ladies, strap-on penis drills and Satanic spawn cooked into casserole dishes as things get sticky fast. Rebecca Romijn’s Danica Ross, it turns out, is a cult leader who is used to getting what she wants.

<
>
Films about cults The brotherhood of satan

Rooms of the Mind: The World and Poe