To discuss the meaning of bugs in the horror film is to open Pandora’s box. Invertebrates have been the subject of cinema since its infancy, such as the 1913 stop-motion delight, The Insects’ Christmas. Within genre cinema, specifically, bugs have almost unanimously been portrayed as monstrous. Societal and cultural phobias surrounding bugs are blown to immense scale, either by the literal gigantism of the bug on screen, or simply by the intensity of their appearance. It would be impossible to worm through the entire history of bugs in horror films – let alone all cinema – in a brief article like this, but it can serve as an introductory overview.

The brilliance of bugs on screen is how malleable they are for meaning, embodying different perspectives across decades, contexts, and cultures. Whether it be a single giant spider or a swarm of regular-sized bees, the alien form of invertebrates makes them a perfect canvas for meaning. So, join me as we look at three particular decades and how their bug-related horror films reflect or defy their cultural and filmmaking aesthetics.

One could spend an entire book dissecting bug movies in the 1950s. The many giant monster films produced in the United States alone had no shortage of enormous spiders, locusts, scorpions, ants, molluscs, leeches, wasps, and praying mantises. A familiar interpretation is that these films directly or indirectly embody fears of the atom bomb. Small creatures are rendered giant as mankind (read: American society) reacts to a diminished stature in a world that can destroy itself. Observing individual films offers more specific iterations of these fears, as well as other layers of meaning.

While Warner Bros.’ giant ant masterpiece, Them! (1954), may be the go-to example of bug movies in the ‘50s, Universal’s Tarantula (1955) offers a particularly interesting example of how the atomic spectre could be articulated. Set in the Arizona town of Desert Rock, Professor Deemer (Leo G. Carroll) and his colleagues have been working on a nutrient to combat global food shortages. Their nutrient is triggered by a radioactive isotope, accidentally causing gigantism in animals (including a tarantula) and an advanced form of acromegaly in humans. Deemer’s laboratory sits far from Desert Rock on the edge of the desert itself. Thus, the boundaries of science against which Deemer pushes (as reflective of contemporary technological discoveries) are realised in the physical boundary between civilisation and the desert – the unknown.

The use of a tarantula is significant. The real-life Sonoran Desert in Arizona is home to several tarantula species, the most famous of which is likely the Aphonopelma chalcodes (the desert blonde tarantula). In late summer, the desert is awash with wandering male tarantulas in search of a mate. The image, therefore, of a wandering giant tarantula in the film is merely an exaggeration of an ecological reality. That the spider eats livestock and people before heading to Desert Rock suggests the natural world pushing back against Deemer’s (and mankind’s) hubristic pursuit of knowledge.

Tarantula is just one invertebrate horror among many in the 1950s, but it is of interest because its images evoke the behaviour of the real animal. The film does not simply appropriate the form of the spider for spectacle and is more potent for it.

The ‘70s witnessed an abundance of eco-horror narratives from blockbuster hits like Jaws (1975) to the exploitation fare of American International Pictures in films like Frogs (1972). In the eco-horror mould, a slew of bug-centric pictures appeared. One immediate visual element which marks these bug films as different to those of the 1950s is a lack of gigantism. In Phase IV (1974), BUG (1975), Squirm (1976), Kingdom of the Spiders (1977), The Bees (1978), The Swarm (1978) and others, the monstrous bugs are realistically sized. If the bug monsters of the ‘50s were abstract visions of the mushroom cloud, the creepy crawlies of ‘70s eco-horror are exactly as they appear. They are the literal embodiment of nature lashing out.

Intrinsic to these films is the assertion that mankind has directly or inadvertently provoked Mother Nature’s revenge through ecological harm. For example, in Squirm (1976), a storm knocks over several pylons near a village in the Deep South, flooding the earth with thousands of volts of electricity. This sends the local bloodworm population into a frenzy, killing anyone they can overwhelm. Though the trigger event is not explicitly caused by mankind, the image of the pylon implicates humanity through technological structures. Other films are more direct. The Bees (1978) openly asserts that mankind has wrought a mutation in the already-deadly killer bee species through corporate greed. Kingdom of the Spiders (1977) similarly suggests that the use of pesticides has driven local tarantula populations to group together and attack.

Of course, much like their ‘50s predecessors, these films individually carry more specific meanings. Pertinent to the many bee movies of the ‘70s was a very real contemporary fear over the potential arrival of the Africanised honeybee (or, the killer bee) in the United States – which eventually came to pass by the early 1990s. Indeed, killer bee movies automatically carry criticisms of mankind because Africanised honeybees were a product of deliberate crossbreeding in the 1950s. Nevertheless, when these films are examined collectively, the broad fears of ecological violence are carried in the invertebrate form.

The 1980s is significant in that myriad science fiction and horror films resurrected and repackaged 1950s ideas and narratives. Strange Invaders (1983) literally starts in the 1950s with an alien infiltration of a small town, only for the plot to be discovered in the 1980s. Night of the Creeps (1986) similarly begins in 1959 with extra-terrestrial brain parasites jumping into a boy’s mouth, only to be revived 25 years later. Killer Klowns from Outer Space (1988) openly mimics The Blob (1958) in style and structure. Beyond these examples, the ‘80s saw landmark remakes of ‘50s classics in The Thing (1982), The Fly (1986), and The Blob (1988). Author Craig Ian Mann has argued that the reappearance of such narratives was no accident. Aside from the fact that several of these films’ directors (Fred Dekker, John Carpenter, etc.) grew up in the ‘50s watching these movies, the 1980s ushered in a nostalgic revival of ‘50s conservatism – embodied by US President Ronald Reagan. Thus, the reappearance of several ‘50s monsters and their associated narratives reflects a similar resurrection of another once-dormant beast.

Considering this context, it’s surprising that there weren’t more bug-related genre films given their abundance in the 1950s. Of course, several films evoke bugs in their presentation, most notably James Cameron’s Aliens (1986); the film not only refers to the titular creatures as “bugs” but features a descent into their nest reminiscent of Them!. Nevertheless, a resurgence of giant bug movies didn’t materialise. However, the ‘80s bug horror films that did appear – The Beast Within (1982), The Nest (1988), etc. – still give us plenty to examine. One slimy title in this regard is 1988’s Slugs.

What’s interesting about Slugs is how it carefully balances the eco-horror tendencies of the 1970s while embracing the firm retrospective revival of ‘50s aesthetics. In the film, a town is threatened by mutant, flesh-eating slugs. It is said that in the 1950s, a toxic waste dump lay close to the town’s borders but was filled in. In the present, a company wants to build a shopping centre over the landfill. It’s theorised that the centre’s construction may have broken through the landfill and released toxic material which mutated the slugs. Immediately, we see that same pattern of something from the ‘50s being resurrected or released to terrorise the then-present ‘80s. 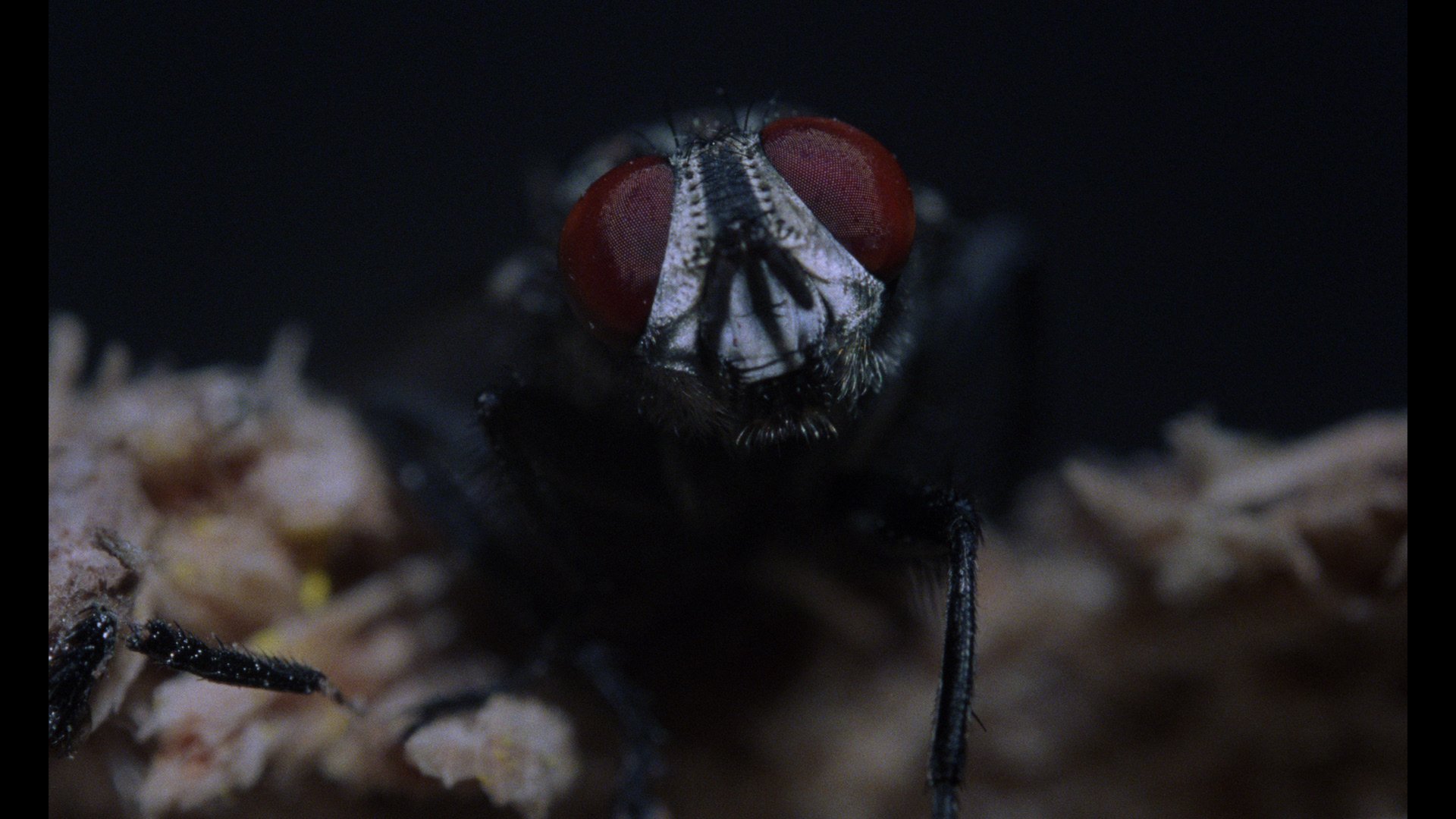 An entomologist’s dream, a horror movie nightmare – behold the fly! From Phenomena (1985)

Far more surprising for the decade given our above discussion is Dario Argento’s Phenomena (1985). Jennifer Connelly plays Jennifer Corvino, a famous actor’s daughter who’s sent to a private girls’ school in Switzerland. In the mountains nearby, a killer stalks and brutally murders young women. Jennifer holds a mysterious link with insects; they react to her emotions and eventually help to defeat the killer.

Phenomena makes clear that insects are beautifully individualised in form yet powerfully collective in action and meaning. Though these bugs appear in a horror setting – and sometimes appear horrific in action – they are not the source of the horror and in fact help to resolve it. The significance of bugs in Phenomena therefore lies in their purpose as helpful protectors to Jennifer. This depiction of insects as heroic distinguishes Phenomena from not just its ‘80s contemporaries, but wider genre cinema as well.

As noted in our introduction, this piece is merely an overview of the myriad appearances, trends, and meanings of bugs in horror cinema. The films covered account for a very narrow slice of what’s out there, focusing mostly on American examples. The discussion becomes infinitely richer when looking at other films from around the world, from Japanese titles like Mothra (1961) and Genocide (1968) to the straightforwardly titled Centipede Horror (1982) from Hong Kong. Applying different cultural lenses presents exciting and enriching perspectives on the meaning and symbolism of bugs in film. It is hoped this piece has whet your appetite to revisit these films or experience them for the first time.

Wrong Place at the Wrong Time: Retrospective on To…

The Deeper You Dig Live Q&A