For us, the viewing audience, the modern zombie represents all of humanity’s nightmares and paranoia: they are our fears made manifest, a metaphor for the raging turmoil and angst of the turbulent human Id.

But over the years, the role of the zombie – the metaphor that the creature represents – has drastically shifted alongside the shifting of our own worries and fears: starting out as a side effect of the collapse of civilisation, the by-product of our own stupidity or carelessness, but has now come to represent the problem itself.

With the eagerly awaited release on Blu-ray of Brian Yuzna’s Beyond Re-Animator – the third and final instalment in the cult horror franchise – we take a look at the turbulent era of the early 2000s and how the violent socio-political climate of the time helped shape the course of the zombie film.

Back in 1968 things were far from well for the US forces fighting in North Vietnam. In January of that year the Tet Offensive had begun – a co-ordinated attack by the North Vietnamese and the Viet Cong on both military and civilian command and control centres throughout South Vietnam. As a result of such heavy fighting, US forces alone lost over sixteen and a half thousand soldiers. 1968 would become known as the deadliest year of the Vietnam War. Troop morale was low and, worse still, more and more soldiers were beginning to question why they were fighting a war that was none of their business. Back home it was proving an unpopular war, with the anti-war movement steadily gaining strength. This, coupled with the assassination of civil rights leader Martin Luther King, culminating in the infamous Holy Week Uprising, it all amounted to one thing the “Sixties didn’t work.” These were the words of writer/director George A. Romero who admits that the screenplay for his seminal film, Night Of The Living Dead (1968), was a direct reaction to the anger and resentment he felt towards his country’s failings in the closing years of the decade.

These primal reactions to the geopolitical and socio-political climate of the sixties led Romero to the creation of one of the most visceral and uncompromising films of the horror genre up to that point, consequently revitalising and reinventing the zombie subgenre. Lifting it from its usual Haitian Voodoo trappings, and transplanting it to rural Pennsylvania near Pittsburgh, Romero elected to eject the hokey rituals and ancient curses, instead making it a simple communicable disease, a freak of nature that can now be spread upon contact (in this case a bite) and kill as surely as any known human pathogens. Romero’s film proved a major turning point for the zombie film, its impact transforming and ultimately reshaping the subgenre – as well as the horror genre as a whole – for the next two decades.

By the 1980s the human race had become preoccupied with the growing threat of global pandemics, deadly contagions and epidemics of apocalyptic proportions, initially brought on by news reports of an outbreak in Nzara, South Sudan back in June 1976, and further exacerbated by the AIDS crisis in the mid-1980s. During this decade, the zombie became a metaphor for lethal viral infection – more specifically the AIDS virus – and the body-horror that resulted. This disease was transmitted through penetration of the body, either by bites or evisceration, infecting us until we were transformed beyond all recognition, losing our identity, our humanity totally (see, for example, the decaying shapeless horrors of Lucio Fulci’s Zombie Flesh Eaters (1979) or Umberto Lenzi’s Nightmare City (1980)).

It was during this time that the zombie’s lust for brains was first introduced via Dan O’Bannon’s horror-comedy The Return Of The Living Dead (1985), another aspect that highlighted the inhumanity of the creatures we would become. During the 1990s more than any other decade, the zombie genre would travel down a number of evolutionary cul-de-sacs, thanks mainly to the rise of indie films, with the creatures popping up in (of all places) nudists colonies in Mark Pirro’s Nudist Colony Of The Dead; at Mardis Gras in Zombie! Vs Mardi Gras (1999); as well as harking back to its old Haitian roots in Rene Eram’s Voodoo (1995).

Although arguably the biggest contribution to the zombie subgenre during the 1990s would not come from the world of motion pictures, but from the world of video games. 1996 saw survival horror game Resident Evil released to the original PlayStation console, who’s enormous popularity sparked renewed interest in the horror genre, opening the door for a new millennium and a new zombie metaphor.

It would be those first few years of the 2000s, during a somewhat turbulent and dangerous decade, that the zombie subgenre would be rebooted to reflect society’s growing sense of unease and uncertainty. The terrorist attacks on the US on September 11th 2001 changed not only the planet, but also how we perceive our fellow humans, both at home and across the oceans. For the first time since the end of the Second World War, we no longer felt safe in our own streets and cities, our own homes even. We were a people in crisis, a race in a deepening state of intense self-doubt, questioning our world and our own future. 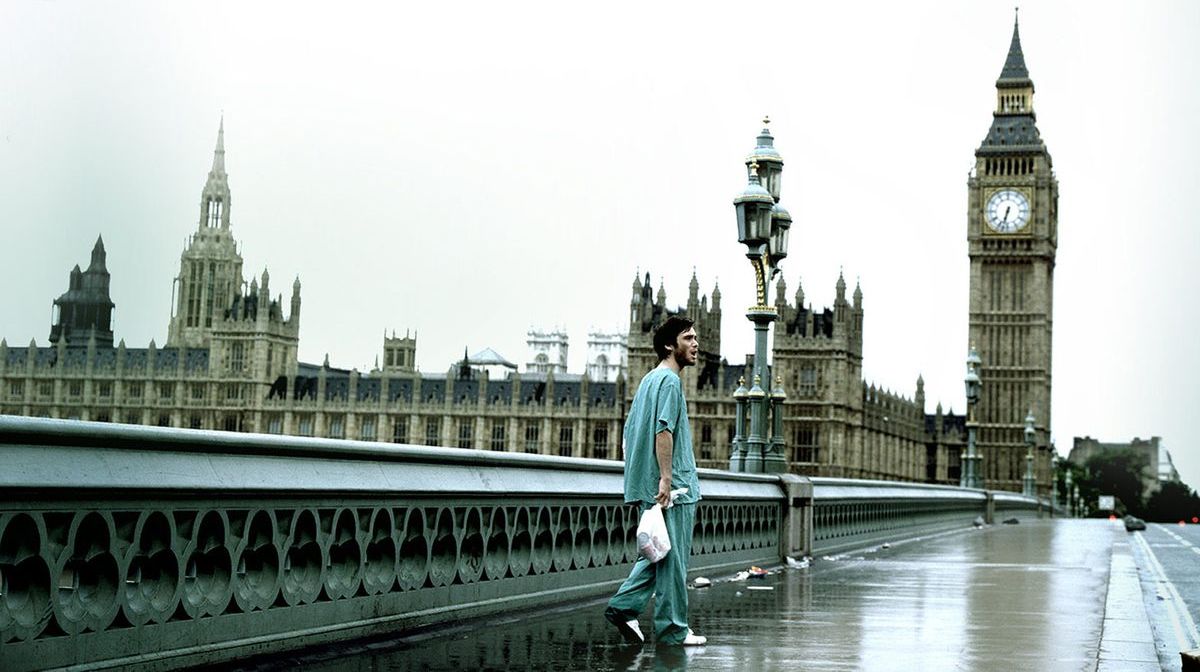 Danny Boyle’s 28 Days Later (2002) would be the first film to reflect this new, desperate uncertainty. Although filming began before the 9/11 attacks, Boyle’s movie is indelibly marked with the scars of a post-9/11 world: empty and in chaos (chillingly reminiscent of scenes from the current pandemic lockdowns). Now the zombie represents a different set of fears that jostle for attention on the front pages of our newspapers: it is biological weapons, dirty bombs, suitcase nukes, human-made pathogens, nano technology, DNA cloning – it is our own technology run riot and turned against us. The notion that the zombie is now the terror that has been brought to our own doors can be seen again in proceeding films, such as Zack Snyder’s Dawn Of The Dead (2004) and Edgar Wright’s Shaun Of The Dead (2005), where the threat from the undead literally comes into our homes.

The nature of the zombie itself has also been radically altered. In Romero’s original trilogy and their subsequent imitators, the zombie is a slow, lumbering beast, lacking both guile and intelligence, acting and reacting purely on instinct. Distorted through the prism of our post 9/11 society the zombie is now a pack animal hunting its prey, and in possession of a rudimentary level of both cunning and purpose. Most frighteningly of all, the zombie of the 2000s now possesses speed. They can pursue and even catch their prey. No more can these creatures be outmanoeuvred by a brisk jog.

With the onslaught of further global catastrophes and crises, such as the second Iraq War, nuclear proliferation in East Asia and the Indian subcontinent, and the Global Financial Crisis of 2007-2008, the zombie subgenre has now come to represent the total collapse of civilisation, the end times that must inevitably come. In Romero’s original trilogy the breakdown of society was a slow process, happening over three films and (if we assume that each film is set within the year they were released, as calendars glimpsed on walls would suggest) over almost twenty years. But even Day Of The Dead (1985) didn’t portray the end of the world, but a society that had adapted to its zombie outbreak, altering the way it lived. But increasingly throughout the 2000s, the zombie film assumes without question that such a plague would be the end of civilisation as we know it, and that a total collapse would follow.

Often the films would fast forward through the collapse itself, opting not to explain exactly how or why civilisation crumbled – this is possibly due to the fact that such a total collapse would actually be statistically unlikely, and any explanation would probably be unconvincing. But collapse they do, and a world with zombies in the early part of the new millennium is a grim and pessimistic one (lacking the adventure, exhilaration and optimism often present in earlier films of the genre), one that has descended into a battleground. Either that, or co-operation between the surviving humans has completely broken down into gang warfare, with society hanging by a thread.

The title of Marc Forster’s World War Z leaves very little room for misinterpretation and speaks volumes as to the raison d’etre of zombie films of this era, with the whole world erupting into all-out war between human and zombie, as we fight to avoid extinction. AMC’s The Walking Dead (as well as its original source material) depicts a very pessimistic view of how humanity would react to one another should a zombie apocalypse come. Gone is the camaraderie and organisation of the early films, instead our fellow humans are as much the enemy as the zombies.

Such is the nature of the zombie movies of the 2000s. The creatures are no longer the real problem, they are merely a gauge on just how far our society has collapsed. Humans are the real enemy and our survival depends upon hiding ourselves behind walls, not to keep the zombies out, but to keep other humans out. If zombies are there to represent the coming annihilation of the human race that we fear might be on the horizon, then the surviving humans represent our distrust of others: those whose ideologies clash violently with our own.

Times change, and the zombie subgenre changes to meet it. The zombie has become the manifestation of all our deepest darkest recess of the inside, and since the turn of the new millennium they have been getting deep and darker as we are becoming unsure of our future and ourselves. In a time when the world is in the grip of a global pandemic, the zombie film is adapting once more, as it must – exploring the broader themes of isolation in Alone (2020), action-adventure with Yeon Sang-ho’s Peninsula (2020), and even a made-for-TV Disney musical, Z-O-M-B-I-E-S 2 (2020). Despite our pessimism, the human race will be around for a long time to come and so will the zombie genre, unless of course there is a real zombie invasion, then I’m afraid its every one for themselves!

Scott Harrison is an award winning scriptwriter, novelist and film critic. He has written tie-in novels and audio plays for a number of film and TV franchises, as well as providing audio commentaries and booklet notes for a wide variety of films ranging from silent Weimar cinema to the pulp 1980s slasher genre. He lives by the sea.

Saul Bass’s Black Cat Walks on the Wild Side