At the dawn of the new millennium, 70-year-old director Kinji Fukasaku became public enemy number one for parents across the world with the release of his student death-match classic: Battle Royale.

It was the final feature-length schism from a director who had long established a reputation for hard-hitting crime dramas. But when placed side-by-side with his industry-disrupting ‘70s output — Street Mobster, Graveyard of Honor and the Battles Without Honor and Humanity saga among them — Battle Royale initially sticks out like a sore thumb. After all, what did cinema verité yakuza exploits have in common with a dystopian science fiction about unruly school kids?

Take a closer look: at the core of Fukaskau’s most definitive works, there is a consistent thematic presence. Fuelled by the war, chaos, violence and societal collapse that the director experienced in his own youth, Battle Royale is a distillation of Fukasaku’s truest essence; the sum of all the movie exploits that had made his name a generation prior. 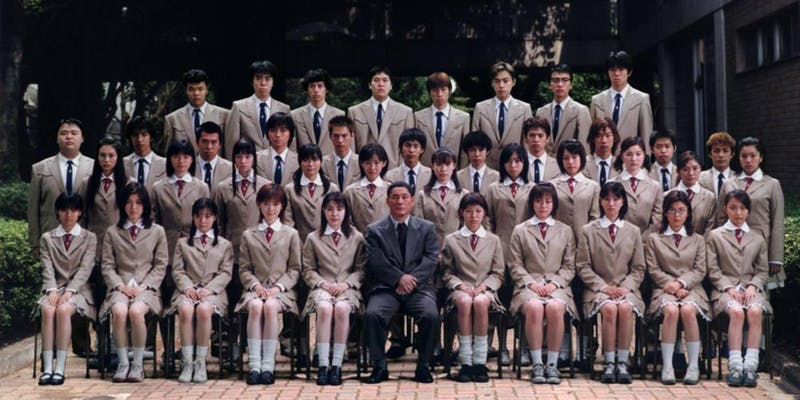 It started with the bomb.

The director’s genesis lies in the burnt-out rubble of a munitions factory in Mito, at the climax of World War Two. It is here that a 15-year-old Fukasaku was drafted, alongside his classmates, to assist the war effort —on a site that became a target for American bombing raids. Here, as the director would frequently recount in his adult life, he would be forced to take shelter behind the bodies of his friends and comrades — later being forced to bury the dead himself. And when the atomic bombs struck Hiroshima and Nagasaki in 1945, he would feel the reverberations for the rest of his life.

Beyond more obvious ‘70s war films like Tora! Tora! Tora! and Under the Flag of the Rising Sun, references to the defining event of Fukasaku’s life could be found in every one of his most heralded works. Take the establishing images of the bombed-out Genbaku Dome in Battles Without Honor and Humanity — a backdrop to the gritty conflicts of the real-life Hiroshima Strife gang wars of 1950-1972. The black market battlegrounds of Graveyard of Honor are set in Fukasaku’s ravaged home city of Mito. And the unhinged Street Mobster hoodlum Okita was born on the day of Japan’s surrender on August 15, 1945.

Even Cops vs. Thugs — which is set in the “present-day” of the mid-‘70s rather than in the squalor of post-war Japan — is shot like a war movie. The chaotic climax, which finds armies of cops rushing into the frontline of a gangster holdout as bullets and tear gas fly, offering the foremost example.

Such explicit references to society’s collapse make the lawless, dystopian premise of Battle Royale clear: it is a brutal substitute for the morally abject grounds on which Fukasaku was raised, in the years after Japan’s real-life apocalypse in 1945.

“Violence is like a parasite,” Fukasaku’s son Kenta would quote of his father in the documentary Portrait of Rage. And if there was ever a more clinical manifestation of the director’s war trauma, it is in the graphic conflicts that line his classic works.

Gangster renegade Rikio “pitted himself against the entire yakuza world” in Graveyard of Honor — a tale of insurmountable odds set against a backdrop of warring clans, who brawl in the streets in a manner reminiscent of The Warriors. Its self-destructive finale, on the walls of a prison, remains one of the most vivid images in Fukasaku’s entire canon — not least because of the buckets of red paint involved.

Likewise, Battles Without Honor and Humanity — sometimes referred to as “the Japanese Godfather” — sets a bloody benchmark early on when two men are ambushed, their right arms cut off with swords. “It was every man for himself,” an establishing voiceover monologue had announced during the film’s opening — proof beyond more obviously titled works like Hiroshima Death Match, Cops vs. Thugs and The Triple Cross that violent dominion was the crux of Fukasaku’s work long before Battle Royale.

Even Fukasaku’s filming style evoked a sense of violence and chaos in his heyday. From his consistent use of stark red text baring title credits over black and white photography to his manic, Godard-esque handheld camerawork edited together with erratic jump cuts, Fukasaku of the ‘70s was a maelstrom in style and form. Battle Royale would largely tone down the documentary-inspired camerawork, but behind the scenes, the director embodied the same sense of vigour internally. As actor Ko Shibasaki claimed in 2020, “[He] had more energy than the actors who were the age of his grandchildren.”

When Japan sunk into economic crisis in the ‘90s, it was the younger generation who suffered. Low unemployment and sensationalist coverage of juvenile crime would dominate the newspapers as a generation bereft of opportunity bore the consequences of their parents’ recklessness. It was a turn of fortunes all too familiar to Fukasaku — and his perspective was much why Battle Royale was so effective.

Films like Battles Without Honor and Humanity had manifested his own generation’s suffering — at the hands of adults who had brought violent war and socio-economic turmoil upon their country. With rampant student protest a backdrop to the ‘60s and early ‘70s in Japan, Fukasaku’s nihilistic crime films felt entirely conducive to the real world at the time.

After all, these were not battles between good and evil. They were struggles for survival amidst poverty, lawlessness and chaos — as seen through the eyes of flawed protagonists and morally dubious institutions. Black-and-white moral standings had no place in the present day — the A-bomb had destroyed those rules and values of the old world, long ago.

Years later, when Battle Royale was handed a rare R-15 rating due to its violent content (after lengthy debate in Japan’s legislative assembly), the director’s response was impassioned. Fukasaku publicly encouraged children to sneak into the cinemas to watch it. Because Battle Royale reminded viewers that life wasn’t going to be fair — but most importantly, it showed that it was never the children who were to blame for society’s downfall, but always the adults.

Through this lens of understanding, the stylistic consistencies across Fukasaku’s films become all the more clearer.

Scenes repeat themselves. Take psychopathic student Kiriyama’s bloody hand, smeared on the window of the cabin in Battle Royale, or the aerial shot looking down on dead students in the lighthouse — mirror images last seen in Graveyard of Honor and Hiroshima Death Match, respectively.

A sense of looking into the past endures through the repeated use of black-and-white snapshots — the photos of Rikio’s childhood in Graveyard of Honor, the newsreel montage of clan wars of Cops vs. Thugs, and the iconic class photo of Battle Royale.

And the subtitle markers that confirm the deaths of everyone from gang leaders in Battles Without Honor and Humanity to the students in Battle Royale act like newspaper headlines themselves — further strengthening their connection to Fukasaku’s childhood, spent watching the nation collapse around him.

Even in their impact, Fukasaku’s most infamous works — separated by a quarter-century — would reflect one other. Just as Battles Without Honor and Humanity had founded a wave of jitsuroku (“actual record”) crime films in the ‘70s — Battle Royale, too, would find itself at the heart of a new film phenomenon: the “Asia Extreme” boom at the turn of the century.

The difference would be that Battle Royale transcended borders, raking in $30 million in international box office returns to crown Fukasaku’s career, cementing his position as a master in the twilight of his life. Considering the catalogue of works it was built from, there couldn’t have been a more appropriate finale.