Writing in the Proceedings of the Society for Psychical Research in 1895, Dr G. B. Ermacora suggested that, based on his presence at a number of experiments he witnessed at Padua and Milan in October 1892, he believed that some individuals possessed what he describes as a “susceptibility to telepathy”. Writing in the same year that the Lumière brothers publicly screened a series of short films in Paris and thus marking a major milestone in screen history, the public imagination was filled with two intersecting marvels – spiritualism and psychic research on one hand, and the magic of the moving image on the other. 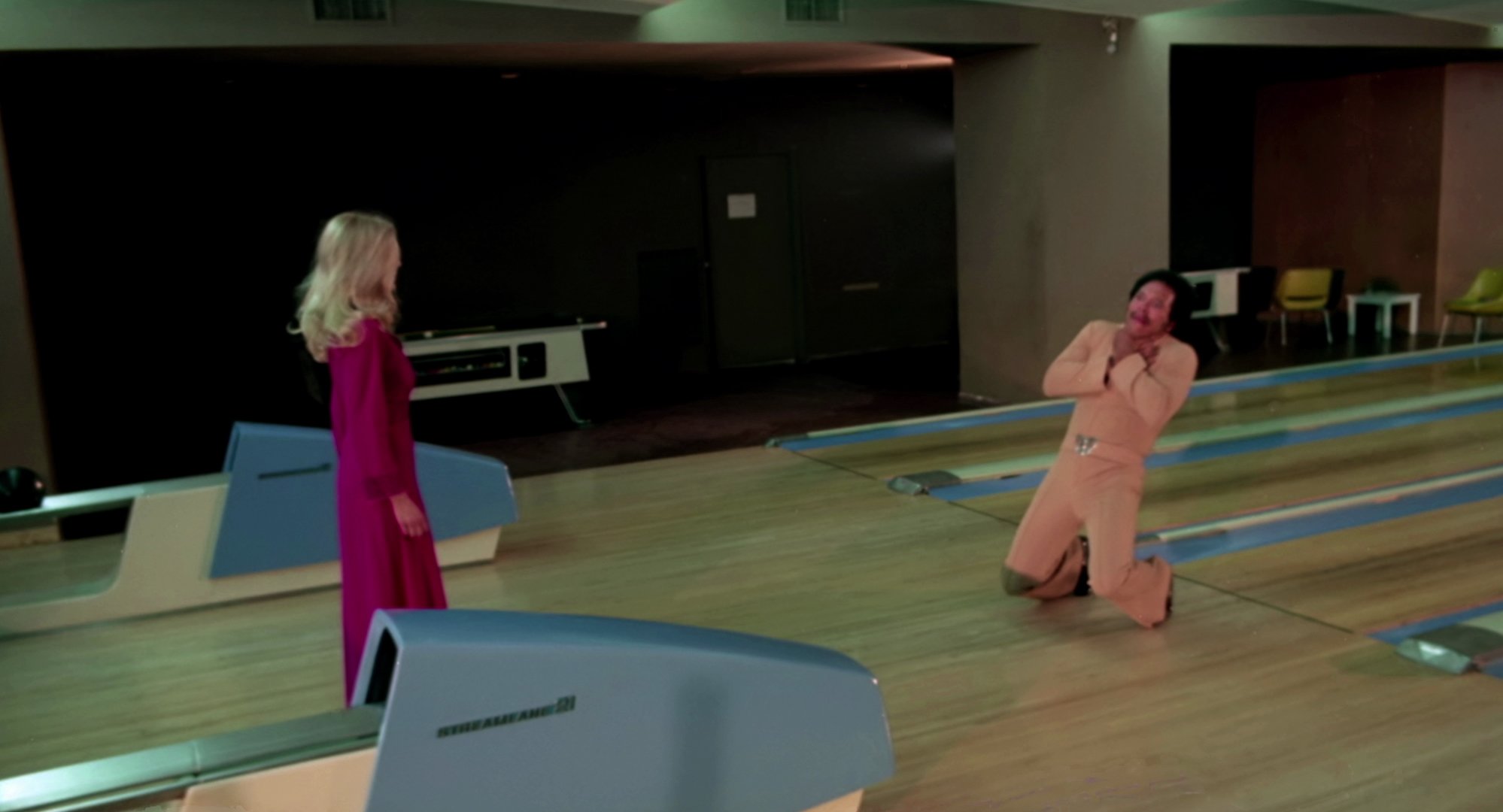 Unexpected drama at the bowling alley

We don’t need to look far for examples. Think, of course, of little Danny Torrens (Danny Lloyd) in Stanley Kubrick’s The Shining and his telepathic bond with Dick Hallorann (Scatman Crothers); whether it is the former silently sharing his nickname or spurring Hallorann half-way across the United States on an ill-fated mission that will end in the latter’s death, the telepathic bond between these two characters is in many ways a key part of the engine that keeps that movie belting along. In Brian De Palma’s The Fury, the telepathic bond between Gillian (Amy Irving) and Robin (Andrew Stevens) allows the two powerful psychics a secret path of communication upon which both of their lives depend in the face of a complex CIA plot that results in John Cassavetes’s head exploding.

Telepathy and other psychic phenomena are not rare in Italian horror either, and in 1986 Kim Newman alluringly labelled gialli specifically with supernatural elements “giallo-fantastico“. The young Jennifer Connolly’s protagonist in Dario Argento’s Phenomena (1985) had a unique telepathic susceptibility when it came to communicating with insects in particular, and in Enzo Milioni’s The Sister of Ursula (1978), Ursula (Barbara Magnolfi) is not just telepathic, but can see flashes of future events. Telepathy plays an important role in the story of Carlo Vanzina’s Nothing Underneath (1985), and of course Lucio Fulci was never afraid of ramping up the spectacle and narrative possibilities of telepathy in horror movies such as Ænigma (1988). And while Jennifer O’Neill’s protagonist in Fulci’s 1977 film The Psychic (often known by its Italian title, Sette Note in Nero) is more broadly psychic, surely the latter is a textbook case of just how effective, powerful and original giallo-fantastico can be.

From Sergio Martino’s All the Colors of the Dark (1972) to Aldo Lado’s Short Night of Glass Dolls (1971), giallo-fantasico are not rare, but nor are they particularly common. While purists might tangle themselves up in knots trying to clinically delineate a boundary between the supernatural and more orthodox gialli, Dario Argento himself – surely the King of Giallo if ever there was one – has never cared for such distinctions, once famously calling it “an artificial distinction; I don’t see a great difference between them. The realistic pictures are not very realistic, even though they’re about psychopaths rather than witches”.

The word “realistic” here in relation to the generally more Earth-bound antics of the more traditional giallo in some ways reveals the yellow elephant in the room here. To watch a film like Death Has Blue Eyes and discuss it through the lens of what is “realistic” is absurd to the point of comical. Even before the telepathy element enters the story, this is a film whose action in no way whatsoever implies any kind of basis in reality for your average 9-to-5 working audience wanting to blow off some steam and watch a saucy movie with a bit of violence thrown in for extra titillating good measure who the film was surely intended to appeal to at the time of its original release. 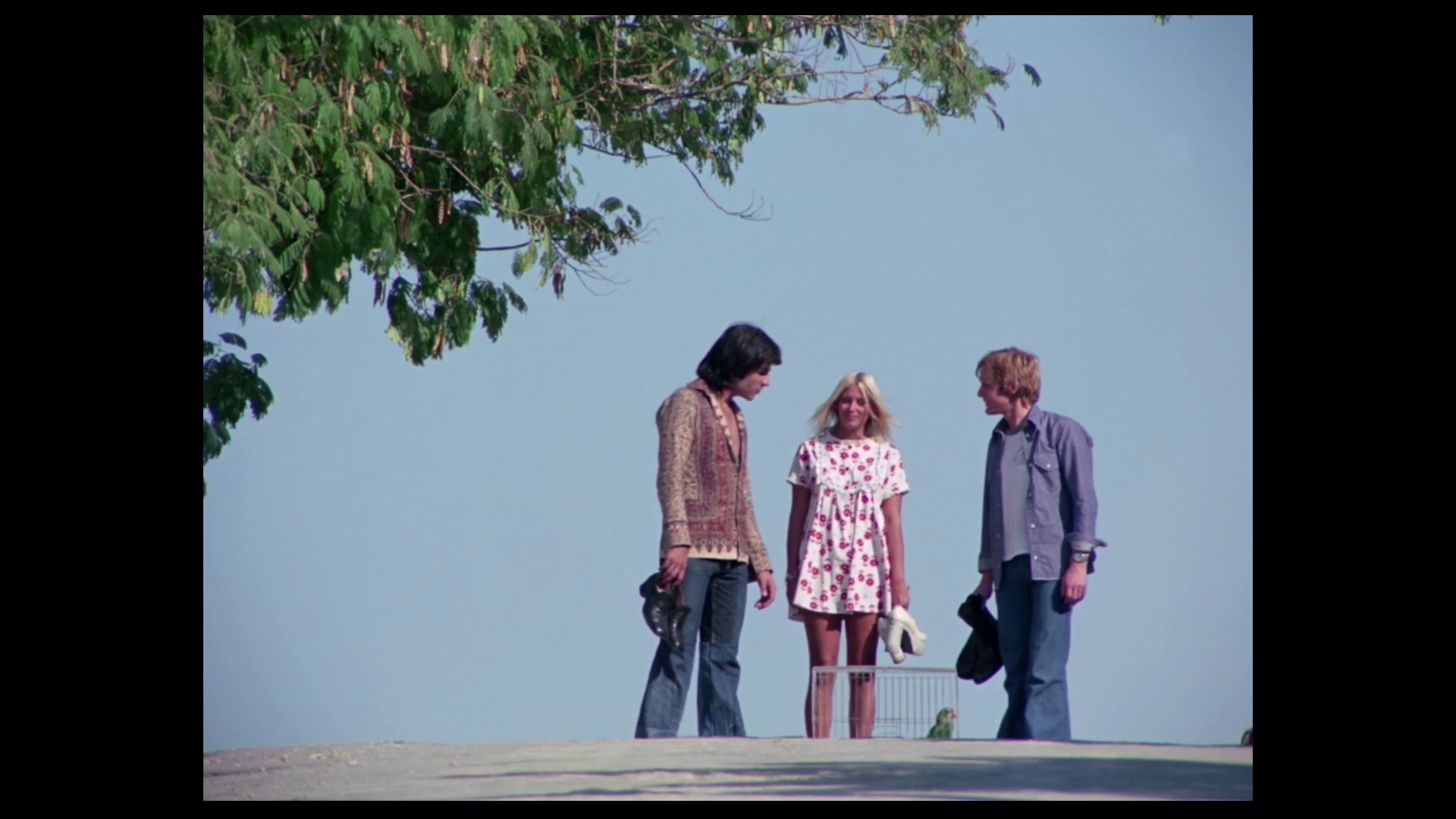 Scene from Death Has Blue Eyes

The jet-set, sexually liberated world of Death Has Blue Eyes is full of international intrigue, gigolos, car-racing sex kittens, and easy threesomes; even without the telepathic element, it is already a fantasy, if not exactly a supernatural one. Think of the very title itself; how can death have blue eyes anyway? So fantastic is this concept that surely on this front alone we are effectively compelled to watch the film to find out.

But upon meeting Geraldine (Jessica Dublin) and her daughter Christine (Maria Aliferi) early in the film, carefree fuckboys Chess (Chris Nomikos) and Bob (Peter Winter) lure us more fully into the world of giallo-fantastico when it is revealed Christine is in fact telepathic and knows all about them. Bringing them on ostensibly to protect Christine, in between group sex romps and their seemingly habitual tendency towards petty crime, Chess and Bob find out they have bitten off much more than they can chew as the two women’s problems are not as easily solved as they first appear. But wait, there’s more: with her enormous telepathic powers, Christine’s value has a geo-political appeal in the film’s broader Cold War context where human pawns are the name of the game.

An until-now classic of the giallo-fantastico sub-category, Death Has Blue Eyes reads the minds of its audience and knows exactly where to pitch its precise combination of sex, sleaze, intrigue, violence and the supernatural to keep us captivated from beginning to end. Simultaneously, however, it feeds into a much broader history of horror-aligned cinema where telepathy as a concept is a potent narrative device that sucks us in and keeps us watching, unable to turn away. It is as if, almost, our own minds are controlled by a powerful external force that knows precisely what smut-monkeys so many of us who love giallo films truly are deep down inside.