One of the best women-directed teen horror films of its time and a top ten staple of the classic ‘goth girls have had enough of your shit’ trope, Marina Sargenti’s debut feature film Mirror Mirror (currently streaming on ARROW) is almost synonymous with its enigmatic star, the alluringly named Rainbow Harvest. As protagonist Megan Gordon, Harvest is central to how Sargenti brings her central themes about young women and their sexuality, thwarted by social institutions that inherently discourage any kind of perceived ‘deviance’. This was a subject she would further expand in her grossly underrated sophomore film, the TV movie Child of Darkness, Child of Light the following year.

So captivating is Harvest’s performance in Mirror Mirror that one can almost be forgiven for missing the fact that the film co-stars two giants of genre film and television alongside her – the iconic Karen Black, and Yvonne ‘Lily Munster’ De Carlo. It’s a teen horror film with a teen at its core, sure, but Black and De Carlo bring not just their enormous star personae to the project, but their talent and inherent knack to know when to play it big – and when to scale it back – exactly when required.

Nowhere is this more apparent than in Black’s performance as Megan’s mother, Susan. Having buried her husband only four months earlier, her deliberate – and at times even camp – caricature of a rich, emotionally tone-deaf Californian housewife is drenched with a shallowness that makes it much easier for us to empathise with her daughter and the dark journey she is about to go on than her newly-widowed mother. “My mom is very Beverly Hills”, Megan explains to a friend at school, and she’s not wrong; changing wigs and often comically age inappropriate outfits throughout the film as she manically grieves for her husband, she seems to be more interested in pouring her energy into her newly acquired, incontinent dogs than her troubled daughter. 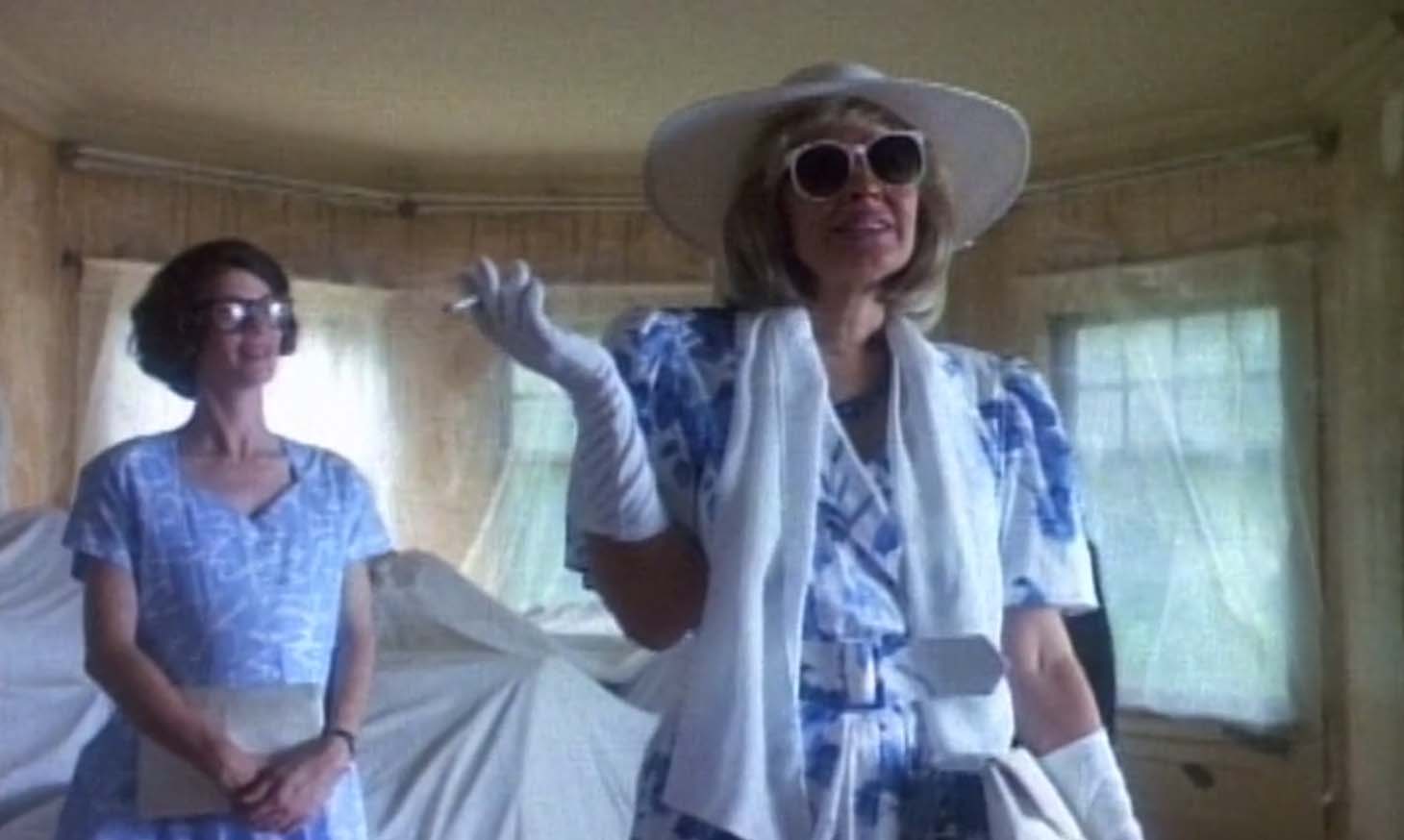 Swept up with her dogs and her blossoming romance with William Sanderson’s pet mortician Mr Veze whom she meets when one of them dies, Susan is largely blinded to Megan’s struggles until it is almost too late. When she eventually does seem to grasp the scale of the issues her daughter is facing, Black very subtly tones Susan right down. But by then, the tragedy at the heart of the film has already begun to unfold.

We cannot of course claim Black for horror alone; working with directors from Robert Altman to Francis Ford Coppola, she more than earned her stripes as one of the most exciting figures of New Hollywood cinema in particular. But horror surely was where her cult reputation is truly tethered. Working with everyone from Tobe Hooper to Larry Cohen to Charles Band to Rob Zombie, it perhaps remains Dan Curtis’s Trilogy of Terror anthology from 1975 that even today renders her so synonymous with the genre.

The latter alone reveals a degree of playfulness to Black’s approach to horror which at first manifests quite visibly in Susan’s excessiveness in Mirror Mirror, so much so that it’s almost easy to miss the point when Black starts to pull her performance style back, revealing a struggling woman that genuinely loves and has real concerns for her daughter.

Although not granted as much screen time as Black, De Carlo’s Emelin is just as essential to the film’s plot, and without her providing the back story about Susan and Megan’s new home’s previous owners, the Wetherworth sisters – all tied to the power of the beautiful but cursed old mirror at the heart of the film – it would remain unknown. An auctioneer hired by the estate of the home’s previous owners who also fell prey to the mirror’s dark powers, Emelin uncovers books and diaries which increasingly fascinate her, revealing as they do the history of witchcraft and how the mirror acts as a demonic portal to let the forces in that so captivate Megan and menace those who stand in her way. Through these diaries, Emelin learns the intimate details about the tragedy surrounding the death of the doomed Wetherworth sisters whose story opens the film, which resulted in murder as they struggled for control over the mirror and this demonic magic. 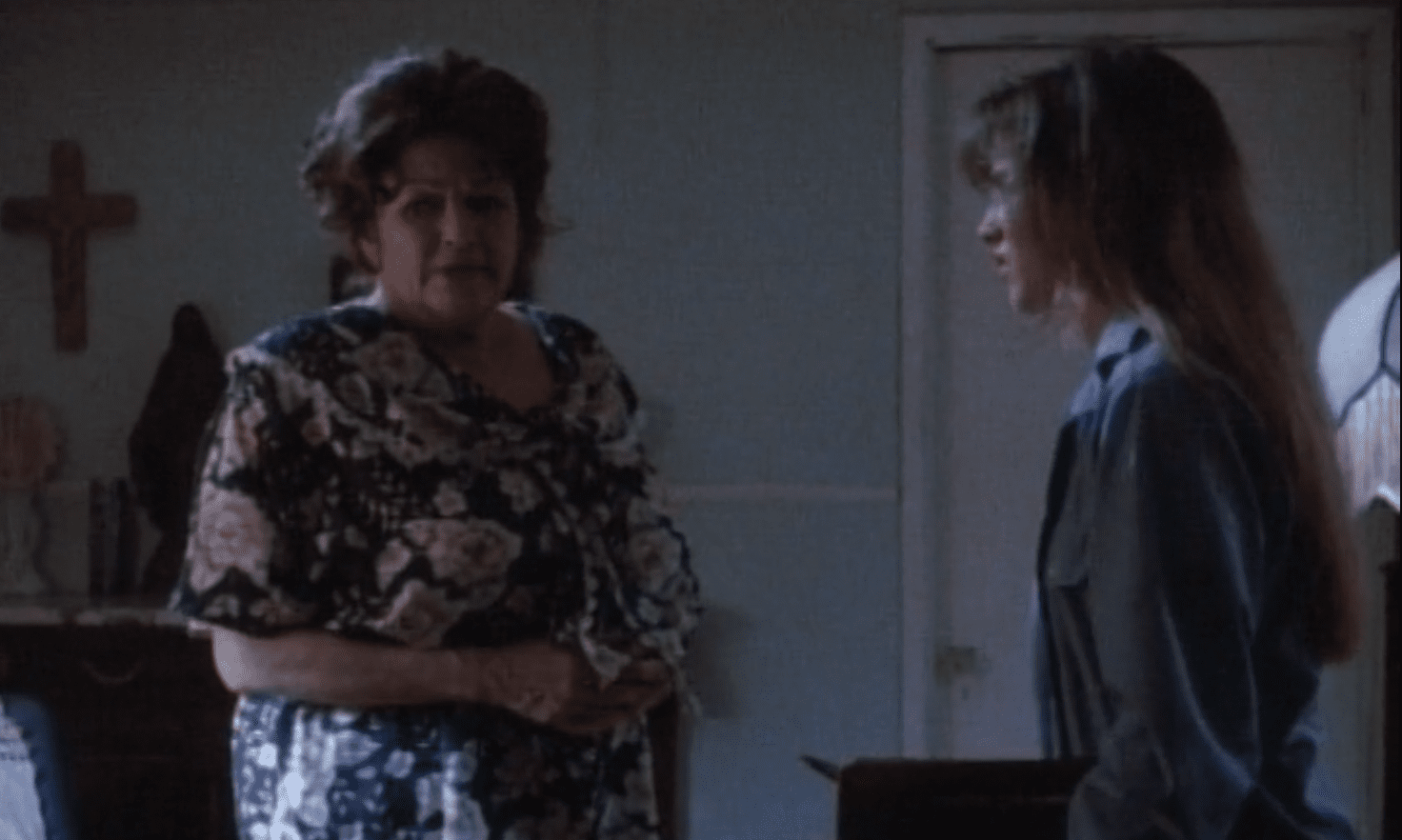 While most of us remember De Carlo as the glamorous Lily Munster (a figure whose goth aesthetic surely would have influenced the young Megan), the now decades older De Carlo puts in a fun performance as Emelin, heavily reliant on physical gestures; in one scene, as she reads, she picks hastily eaten home delivered Chinese food out of her teeth, distracted and overwhelmed herself by the tale of the mysterious mirror.

When she discovers Megan has kept the mirror for herself, she tries to get it back, the implication being that she too wants a bit of the dark magical action that the strange object can provide its owner. But in a similar journey to Susan, Emelin realises just how high the stakes are the further the film progresses. Crucially, she is the figure who provides Megan’s friend Nikki with the secret of how to potentially stop what is happening by closing the portal. Like Susan, however, for Emelin it may again be too little too late.

Like Black, De Carlo’s pre-Munsters career spanned genres, and to this day beyond the kooky spooky sitcom family, her most recognisable role may be that of Sephora in Cecil B. DeMille’s The Ten Commandments in 1956. But while that film may have made her a star, it was The Munsters that made her a legend, and beyond that legendary sitcom and its spin-off movies, De Carlo would pop up in later horror movies including Satan’s Cheerleaders and Nocturna in 1977, The Silent Scream in 1979, and American Gothic and Cellar Dweller, both in 1988. The year after Mirror Mirror, De Carlo appeared in John Landis’s Sylvester Stallone-fronted comedy Oscar and a few years later in a Disney TV movie remake of The Barefoot Executive, two of her last screen performances before she largely stepped away from acting until her death in 2007.

In many ways, what makes Mirror Mirror so enduring is that it is at its core a young person’s film with a young person’s energy, thanks largely to the electric collaboration between its star Rainbow Harvest and first-time director, Marina Sargenti. But that dynamic is built here on the shoulders of giants – true horror icons in the shape of Karen Black and Yvonne De Carlo – and while it might be easy at first to miss how essential they are to what makes this film tick, that doesn’t mean we shouldn’t take time to stop, pause, and admire precisely what it is they bring to one of the most exciting and fresh horror films of its era.

Hope Dies at Conception: Hell High and other High…