Janghwa, Hongryeon / A Tale of Two Sisters (2003) first came to prominence in the UK in the early 2000s, courtesy of the Tartan Asia Extreme label. The DVD cover compares the film to Japanese horror film Ringu (1999), and its fellow labelmates are Audition (1999) and The Isle (2000), of which the latter was described by Roger Ebert as “the most gruesome and quease–inducing film you are likely to have seen”.

These reference points suggest that A Tale of Two Sisters is likely to be a visceral, terrifying, designed to excite (and repel) your senses in very primal ways.

But Asia Extreme doesn’t represent what A Tale of Two Sisters truly is.

It’s sense of deep unease, its creeping dread, has its origins in an altogether different kind of film: horror filmmaking during the golden age of Korean cinema in the 1960s.

During this period, there were two main ways to do horror. You could adapt Korean folk tales – such as Cheonnyeon ho / A Thousand Years Old Fox (1969), which focusses on a fox spirit that possesses desperate women in an effort to reincarnate as a human being – or you focussed on gritty, domestic settings ­– epitomised by Hanyo / The Housemaid (1960), in which Myong–ja, a maid, takes revenge on Tong–­sik, her married employer, after he impregnates her and then forces her to throw herself down the stairs to abort her child.

A Tale of Two Sisters draws upon both strands: it adapts the Korean folktale “Janghwa Hongreyon–jon” – in which two young girls are murdered by their wicked stepmother – but then places this adaptation within the claustrophobic context of the domestic thriller. 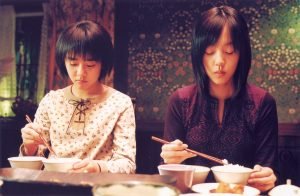 Both strands also centre female experience, which is what drew me to A Tale of Two Sisters in the first place. I am, and always have been, compelled by the fierce sisterhood of the girls, the tense, loaded exchanges between eldest daughter Su–mi and their new stepmother Eun–joo, the inability of Su–mi to communicate with her baffled, remote father Moo–hyeon.

A Tale of Two Sisters also draws on its Korean heritage in other, more subtle ways as well. Eun–joo was nurse to the girls’ sick mother, and over time, inveigled herself into becoming Moo–hyeon’s second wife. Eun–joo represents the cunning, duplicitous female archetype in Korean cinema, the mothers–in–law, stepmothers, nurses or maids brought into the home contractually, their entry secured by a marriage certificate or a job. Once established in the domestic space, they scheme to usurp the wife / mother with the intention of taking her place and gaining power. As scheming nurse and dangerous stepmother, Eun–joo is a descendant of a long line of “real” women monsters in Korean horror cinema, one that can be traced right back to not just The Housemaid but Salinma / A Devilish Murder (1965, Lee Yong–min) and Wolhaui gongdongmyoji / Public Cemetery Under the Moon (1967, Kwon Cheol–hwi), in which everything goes wrong for Myeong–son when her maid, Nan–joo arrives to help her.

However, Korean horror is also keen on a second kind of female monster: the wonhon. This is a woman who was innocent in life, who was betrayed, and died, and who now returns to seek revenge. This suffering woman is often the biological mother of the family’s children and / or the first wife in the family. She has often been poisoned by the double–crossing, duplicitous women in her extended family, or she has chosen to die by suicide, after her honour is called in question, or her husband has betrayed her. In Public Cemetery, Myeong–seon commits suicide after being framed for adultery, while in A Devilish Murder, the ghost of Ae–ja haunts businessman Lee Shi–mok and his second family, after she dies by suicide.

What is particularly distinctive about Korean horror film, is how the national genre likes to play these two monster types alongside each other, in the same film. There is no separation of real and supernatural horror; the ghosts are always around us. In these films, there are scary women everywhere. In A Tale of Two Sisters, the girl’s mother dies even as her husband flaunts his nurse–mistress in their home. And now, a wonhon is roiling, under the kitchen sink, while another lurks, vertebrae cracking, in the wardrobe of Su–yeon’s bedroom. 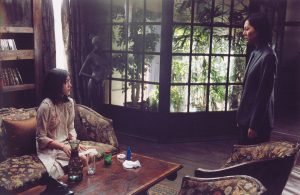 In and amongst this emotional maelstrom wanders Moo–hyeon, the passive, weak father who is unable to accept that his past actions have had terrible consequences, consequences which even now inflect the present. Moo–heyon is borderline absent in this film, his presence only ever flickering around the edges of the frame. He is typical of male characters in golden age Korean horrors: pathetic, zombie–like and unable to empathise. In A Tale of Two Sisters, he has but two functions, one narrative, one symbolic. First, his past bad behaviour propels the present plot. Second, he is an object, a representation of patriarchal power (even if, in actuality, he remains powerless). We are never interested in who Moo–hyeon is, what he wants, what he does. He only becomes enticing when Su–mi and Eun–joo fight over ownership of him, when they stake their place in the territory of his house and his body, when they wash his clothes and sleep in his bed.

When the truth of the situation emerges, we understand a little more about why he behaves in the way that he does, why he suffers, how his world has fallen apart. Despite this, the concept of han ­– the Korean concept of agonising grief at unfair suffering – cannot be attributed to him, nor to Eun–joo. Both Moon–hyeon and Eun–joo knew what they were doing, they deified the sanctuary of the family home, and they will pay.

In the end, this is what makes A Tale of Two Sisters so distinctly Korean: good people might die, unjustly, but bad people will always be punished.

Not So, Macho Man – Toxic Masculinity in East Asian Cinema