It was a time and a place for heroes. Hollywood in the 1990s delivered a decade-long stretch of historical adventure movies; films with big budgets, big action and even bigger mullets.

Kevin Reynolds’ Robin Hood: Prince of Thieves kicked things off with quite the (gunpowder fuelled) bang. The ’90s served up all manner of rip-roaring offerings, exemplified by Reynolds’ 1991 adaptation of the classic English folk tale.

Following in the footsteps of numerous cinematic outings for the arrow-shooting tree-dwelling do-gooder, the big budget ‘90s version became quintessential for film-lovers of the era. I was nine when it hit cinemas in the UK and have since revisited it countless times (often around Christmas; Michael Kamen’s score still gives me goosebumps and a craving for a turkey sandwich).

The film dishes up massive star power including Kevin Costner as our titular hero, Morgan Freeman as his companion Azeem, Mary Elizabeth Mastrantonio as Lady Marian, Alan Rickman as the Sheriff of Nottingham (in a turn that gifted us one of cinema’s truly great villains), Christian Slater as Will Scarlet, Geraldine McEwan as the witch Mortianna, Michael Wincott as Guy of Gisborne, Brian Blessed as Lord Locksley, Michael McShane as Friar Tuck and, in a jaw-dropping cameo, Sean Connery as King Richard.

As Robin Hood (nee. Of Locksley), Costner is a proper Hollywood leading man, perfectly equipped to carry such a massive blockbuster title. His accent may not be flawless (he delivers the line “This is English courage” with a recognisably Californian twang) but he gives an assured, emotional and charming performance. 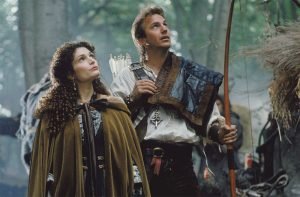 It’s also devastatingly romantic, and more than a little sexy; the chemistry between Costner and Mastrantonio is strong, plus both Marian and the audience are treated to a glimpse of Costner’s bare bum, not for the first time in the ‘90s – see the epic Western Dances With Wolves (1990). No really, see it.

Perhaps one reason that this movie has endured as a favourite above other 90s historical adventures for me, horror obsessive that I am, is that the romance and action and Hollywood gloss are balanced with a healthy dose of medieval bleakness. We get Rickman’s Sheriff and his live-in witch, allowing the plot to explore some occult themes, plus a decent amount of mortal violence, attempted rape, and body horror. And even a classic feline jump scare at one point from Marian’s cat Nicodemus.

Robin Hood: Prince of Thieves gives us all this, while also serving up some simple messages about racial and religious tolerance, and – even if Marian, Fanny Little and Mortiana are literally the archetypal Maiden, Mother and Crone – female power in various forms.

It’s no wonder I keep going back. But you were promised a decade full of this stuff… let’s see what else was on offer.

Michael Mann’s acclaimed colonial epic stars Daniel Day-Lewis (nominated for a BAFTA for his performance as the white Mohawk Nathaniel “Hawkeye” Poe), Madeline Stowe and Russell Means. Mann’s movie – characteristically detailed in its execution – is based on the 1826 novel ‘The Last of the Mohicans’ by James Fenimore Cooper but actually owes more to an earlier adaptation directed by George B. Seitz in 1936. Like Prince of Thieves, The Last of the Mohicans embodies sweeping romance and emotion, but with a much more earnest tone.

In ’93, the world had thrust upon it another movie adaptation of Alexandre Dumas’ 1844 novel about swashbuckling French swordsmen D’Artagnan, Athos, Porthos and Aramis, directed by Stephen Herek, and starring Charlie Sheen, Kiefer Sutherland, Chris O’Donnell, Oliver Platt, Tim Curry and Rebecca De Mornay. This was more akin to Prince of Thieves, with its huge cast, sumptuous costuming and less realistic tone, but without the heart. It also had its own Bryan Adams banger (only this time he was joined by Rod Stewart and Sting, and it only reached number 2). The film, too, never reaches the same heights, and is a damp squib considering the production values.

Telling the story of legendary Scottish warrior William Wallace, Braveheart helped (briefly) solidify Mel Gibson as one of Hollywood’s hottest properties after he produced, directed and starred in this historical epic. It swept that year’s Oscars, taking home Best Picture, Best Director and Best Cinematography, amongst others. Again, the film is all action, drama and romance, and like The Last of the Mohicans has more of a realistic bent, despite being riddled with historical inaccuracies; historian Seán Duffy famously remarked that “the battle of Stirling Bridge could have done with a bridge.”

Still one of the biggest movies ever made, James Cameron’s Titanic had almost as much historical impact as the 1912 real life shipping disaster upon which it’s based. Well, not quite, but it was BIG. Thanks to their lead roles as class-crossed lovers Jack and Rose, Leonardo DiCaprio and Kate Winslet were catapulted to stratospheric stardom. Titanic became the highest-grossing film of all time and stayed in the top-spot for 11 years. It was the first film to earn more than $1 billion worldwide, is cited as the first foreign-language film to be successful in India, and ties Ben Hur and The Return of the King for the most Oscar wins. It’s also another example of a 90s historic adventure film that had its own ridiculously popular theme song: Celine Dion’s soaring ‘My Heart Will Go On’ sold around 18 million copies and is the second best-selling single by a female artist. She’s flying, Jack.

More big-named swashbuckling, this time executive produced by Steven Spielberg and starring Antonio Banderas, Anthony Hopkins and Catherine Zeta-Jones. Set in the 1820s, it follows two generations of Zorro, a masked vigilante who – not unlike Robin Hood – defends the poor from oppression. Initially, Robert Rodrigez was down to direct and I would’ve happily slashed someone with a stylised ‘Z’ to see his version! But Martin Campbell does a fine – if edgeless – job, and Banderas shines as the charismatic younger Zorro, especially when flanked by his excellent co-stars, to entertaining effect.

Let’s bookend things with another 5-star all-timer. Russell Crowe gives the performance of his career (so far) as Maximus Decimus Meridius, Commander of the Armies of the North, General of the Felix Legions and loyal servant to the true Emperor, Marcus Aurelius. (Father to a murdered son, husband to a murdered wife). Gladiator takes what Robin Hood: Prince of Thieves did – lush production, smart script, heart-crushing romance and rousing action set pieces, and cranks the whole thing up to 12 under Scott’s confident steer. Reinvigorating an appetite for Roman epics, it paved the way for movies like Troy (2004), Alexander (2004) and 300 (2006) – make of that what you will. Because, like any genre, historical adventure movies come in all shapes and standards, but I could watch Gladiator and Robin Hood: Prince of Thieves back-to-back and on loop for the rest of time and never tire of the situation.

Becky Darke is a London-based podcaster, writer, presenter and programmer with her sights on film, horror and the ‘90s.​