Japanese films about the Second World War offer a valuable lens through which to understand the events that shaped the nation thereafter. And be it Studio Ghibli’s Grave of the Fireflies, Shohei Imamura’s Black Rain, or even Kinji Fukasaku’s sections of the international co-production Tora! Tora! Tora!, these films provide plenty of insight into the individual philosophies and styles of their directors, too.

With the recent release of Yasuzô Masumura’s much-overlooked Red Angel, Arrow took the opportunity to look back on war films by some of the country’s leading filmmakers (including a cyberpunk visionary, a New Wave pioneer, the king of commercials and an icon of Japan’s Golden Age) to find out how each work can be understood as a valuable lens into the director’s wider canon:

With over 50 features to his name, the works of Yasuzô Masumura are hardly easy to classify by a consistent style or theme. But the 1966 film Red Angel does notably bear commonalities with several other Masumura works released by Arrow in the past year.

Red Angel is the tale of a young army nurse who cares for wounded soldiers and damaged medical workers during the Sino-Japanese War, and the film’s vivid opening foreshadows much of the chaos to come. Stills depict clouds of smoke, soldiers in trenches, graveyards and skulls, as the audio field is filled with the sounds of bullets and explosions. Thereafter comes a bleak depiction of the horrors of war, best summed up by narrated dialogue at the film’s mid-point: “Many died waiting for surgery. Some died during surgery. Others died after the operation. They all went to the morgue.”

Surgery scenes depicting suffering and dismemberment are aplenty in Red Angel (with the sound of a sawing amputation among the most evocative), with such images drawing parallels with the horrifying climax seen in Blind Beast. The latter’s delirious depiction of a blind sculptor’s works in a surreal, cavernous lair — most notably via its wall of giant legs — meanwhile mirror some of the more grotesque images in Red Angel, such as a bucket full of chopped arms, legs, hands and feet that lie at the foot of an operating table. 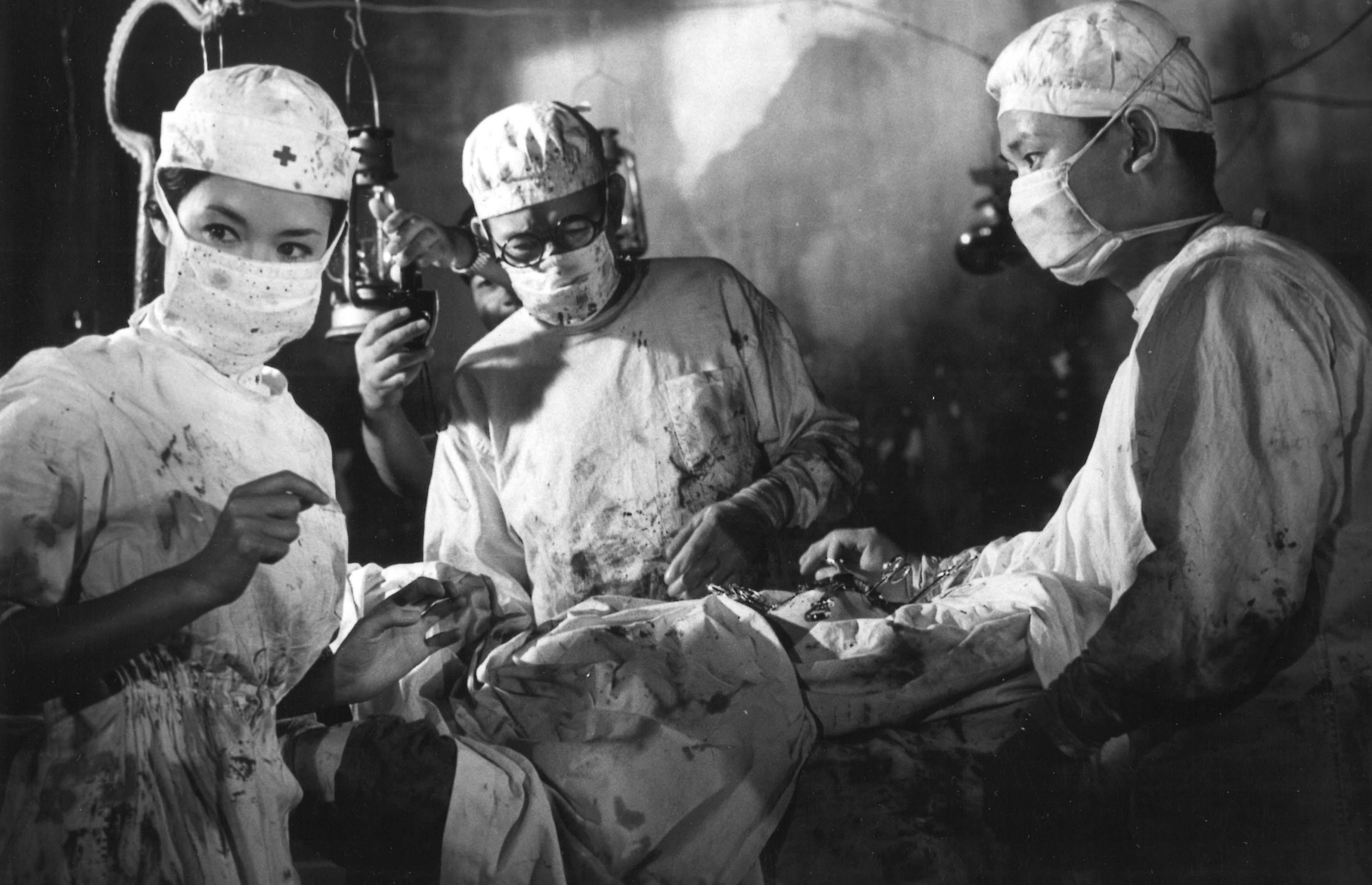 Tending to the wounded, Sakura (Ayako Wakao) experiences the horrors of war in Red Angel (1966)

Scenes of blade-inflicted violence are also prominent in Irezumi, and indeed, all three films vividly explore relationships between subjects and their physical bodies. There’s the nurse in Red Angel, who treats the wounds of soldiers; the female seductress of Irezumi, whose actions are dictated by a tattoo inscribed upon her back; and the titular Blind Beast who is obsessed with sculpting the human body.

But they are also films about strong, self-willed women (played, in two of the aforementioned works, by the mercurial Ayako Wakao) — and it is these themes of gender that ensure that Red Angel stands out so well from other films of the genre.

Tsukamoto remains best-known in the West for his cyberpunk body-horror classic Tetsuo: Iron Man. And while the monochrome visuals, stop-motion editing and industrial score of the former may be absent in his adaption of Kon Ichikawa’s 1959 film Fires on the Plain, the themes of bodily transformation remain well within reach.

Death is everywhere in Fires on the Plain — a harrowing examination of a withering, TB-afflicted Japanese soldier stuck on an island in the Philippines at the end of the Pacific War. It is a setting that is intensely colourful and full of verdant greenery, but also full of rotting, maggot-infested corpses, and starving, cannibalistic soldiers. A Saving Private Ryan-style massacre at its centre, where troops are disembowelled and torn limbless in the line of enemy fire, sums up the interpretation best: war is a violent nightmare.

Completely self-funded and produced by the filmmaker, Fires on the Plain retains much of Tsukamoto’s fiercely independent style despite the differences on the surfaces — most readily through the delirious, guerrilla-style camerawork. The director is also captivating playing the film’s focal character, as he so often does in his films — and indeed, what better way to understand the subject’s suffering than to cast oneself as the lead?

“All of my pictures… are concerned with resisting entrenched power,” director Masaki Kobayashi once told historian Linda Hoaglund. It’s an observation that could be applied to any one of his classic films. From the defiant ronin who sits in the forecourt of a feudal lord’s manor in Hara-kiri, to the defecting warrior of Samurai Rebellion, Kobayashi’s works are deeply concerned with the struggles of the individual within an unjust society. It is incredibly fitting, then, that his towering breakthrough The Human Condition would utilise World War Two as the backdrop through which to embody those themes at their purest.

The Human Condition tells the story of a Japanese pacifist (played by Hara-kiri’s Tatsuya Nakudai, a regular Kobayashi collaborator) determined to defy an authoritarian system while his country is at war with the Allied Powers. Across nearly ten hours, tragic hero Kaji goes from labour camp supervisor to front-line combatant before eventually winding up as a POW at the hands of the USSR, his deep-set moral code proving his undoing more often than his advantage.

An often damning statement on Japan’s wartime imperialism, The Human Condition depicts the exploitation of Manchuria, corrupt Japanese characters who inflict brutal violence, and suffering innocents who have no choice but to comply. It was deemed daring to the point of controversy in Japan, while overseas it would garner awards at festivals like Venice. It also found a significant international audience — with the middle film notably foreshadowing the narrative depicted in Stanley Kubrick’s Full Metal Jacket.

Leading Japanese New Wave director Nagisa Ōshima is another difficult figure to pin down, so varied are his works in terms of style, production and themes. But with Merry Christmas, Mr Lawrence — a British-Japanese co-production shot in Polynesia and New Zealand — there are identifiable strands that link with some of his brilliant later works, while retaining the politicised edge of films like Night and Fog in Japan (1960) and themes of cross-racial relations and social injustice seen in Death By Hanging (1968).

Merry Christmas, Mr Lawrence takes place in 1942 in Java, a mountainous paradise marked by lush, green jungles and a tropical blue glow, where British soldiers are imprisoned at a Japanese-operated POW camp. A brutal camp enforcer (Takeshi Kitano) punishes inmates for engaging in assumed homosexual conduct, forcing one Korean-born soldier to commit seppuku for the “buggering” of a Dutch detainee. Meanwhile, the camp’s stern commander (Ryuichi Sakamoto — also the composer of the film’s iconic score) develops a fascination with the newest captive: a defiant major played by none other than David Bowie.

Themes of homosexuality would notably be at the fore again in Ōshima’s final feature, 1999’s Gohatto — a period drama about an effeminate young samurai who becomes the object of desire for his fellow swordsmen. The film notably features Kitano in a lead role again, while Sakamoto also returns to provide another memorable score.

Hanagatami, a visually spectacular drama completed just a few years before Obayashi’s death from cancer, bears many of the same hallmarks of the director’s surreal haunted house classic House without ever veering into the lunacy that the latter is regarded for.

The film concerns a group of young Japanese nationals who observe the effects of World War Two from their homes rather than the front lines, in a series of diverse narrative strands. Visually, it is dominated by Obayashi’s signature style: collage sets, saturated colours, and an experimental editing style derived from his years as a director of commercials in the ‘60s and ‘70s. No better is this observed than in the film’s most powerful image: a brief but stunning depiction of the atom bomb’s mushroom cloud as seen billowing over the ocean.

As Third Window’s Obayashi anti-war trilogy highlights, the director’s final works all bore a strong pacifist sentiment while exploring Japan’s wartime history. This sentiment was carried by the director since his youth, in which he experienced the fallout from the destruction of Hiroshima while living in nearby Onomichi.

“Generally speaking, what I’ve expressed in my films is war, or the influence of war,” he would say, in an interview included on Third Window’s new box that summates the relationship between his philosophy and creative style. “[But I’m] making movies to make dreams of peace.”

Pulling The Strings: Exploring The World Of Puppetry…