Few films have landed with more of a universal thud than David Lynch’s Dune did in December of 1984. Critics savaged the science fiction epic, audiences actively avoided the film, and Lynch himself even quickly disowned it, blaming bad edits for the film’s failure. And yet there’s something about Dune that has kept it in the cinematic conscious more than most box office bombs of its era. Of course, this is largely due to the resilience of the universe created by Frank Herbert, one that has spawned numerous book sequels, TV adaptations, and a 2021 version by Denis Villeneuve. However, David Lynch’s film shouldn’t be so easily dismissed as a modern version seeks to supplant it in the pop culture sphere. It’s a fascinating chapter in the career of one of the most important American directors, a cautionary tale about the difficulty of satisfying a fan base, production team, and a filmmaker’s own voice at the same time that has sandwormed its way back into pop culture.

Frank Herbert’s Dune was originally published in Analog magazine in 1965 in two separate serials. Set thousands of years in the future, it tells of an interstellar battle between factions feuding over control of a desolate planet named Arrakis. Barren and inhospitable, Arrakis is the universal source for something called “the spice,” which is the key to everything from longer life to space travel. A young leader named Paul Atreides centers the complex story that’s as dense with politics and world-building as it is action. Dune was a massive success, leading to five sequels by Herbert, and a continuing line of books by Brian Herbert (Frank’s son) and Kevin J. Anderson. There have also been comic books, board games, a role-playing game, and video games set in this robust universe, but David Lynch’s Dune remains the centerpiece when it comes to feature films. 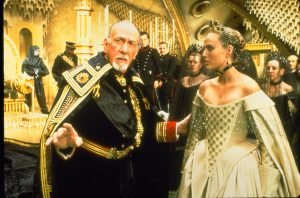 It almost wasn’t a David Lynch film. When the rights were first optioned in 1971, producer Arthur P. Jacobs’s first choice was actually David Lean, who turned down the offer, as did Charles Jarrott. When Jacobs died in 1973, the rights were purchased by a French group with plans for the visionary director Alejandro Jodorowsky to helm it. As chronicled in the excellent Jodorowsky’s Dune, the Chilean filmmaker’s vision for Dune was breathtaking, conceived as a 10-hour feature with visuals that film had never seen before and a simply insane collection of performers. Starring Brontis Jodorowsky, Orson Welles, Gloria Swanson, David Carradine, Mick Jagger, and Salvador Dali, with designs by H.R. Giger and a score by Pink Floyd, Jodorowsky’s Dune is one of the most notable “films that never happened,” as financing couldn’t keep pace with Jodorowsky’s vision.

The rights bounced to Dino De Laurentiis, who hired Herbert himself to write an adaptation and Ridley Scott to direct in 1979. Scott worked on the project for months, but eventually dropped it to make a little movie called Blade Runner.

Enter David Lynch. Coming off the massive success of The Elephant Man, which had earned him an Oscar nomination for Best Director (along with one for Best Picture), Lynch was a hot commodity in Hollywood. He was even offered a chance to direct Return of the Jedi (the mind reels at how he would have rendered Ewoks), but he settled on Dune despite reportedly being unfamiliar with the book. He was handed a gigantic budget ($40 million, which is over $100 million in modern terms) and set about to distill a dense novel into a feature film, assembling a remarkable ensemble of newcomers and veterans: Kyle MacLachlan would make his film debut as Atreides, joined on-screen by the likes of Patrick Stewart, Linda Hunt, Brad Dourif, Jack Nance, Dean Stockwell, Sean Young, and Sting. 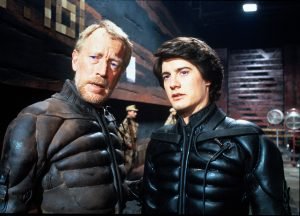 Conceived as “Star Wars for grown-ups,” according to star Virginia Madsen, Dune was a massive undertaking, requiring the construction of 80 sets on 16 sound stages and a crew of hundreds. Lynch reportedly envisioned a three-hour film, but Universal insisted on a cut near the two-hour mark, which is where many of the film’s problems lie. As scenes hit the cutting room floor, the complex storytelling suffered, leading to the addition of voiceovers that attempted to fill in the plot for viewers and an introduction by Madsen that tried to set the stage but only made the first act even more confusing. Lynch has reportedly been approached multiple times to recut the film to his own liking but has always declined.

The critics were brutal. Roger Ebert called the film “an incomprehensible, ugly, unstructured, pointless excursion.” His partner-in-thumbs Gene Siskel agreed, quipping, “I hated watching this film.” They picked it as the worst film of 1984, and they weren’t alone. The box office suffered as ticket buyers stayed away from a film for which theaters handed out pamphlets to explain the characters and plot. (No-one wants homework with their popcorn.) Planned sequels collapsed and Lynch shelved an in-process screenplay for Dune Messiah.

Lynch would later blame the response on not having final cut, although no one could really mistake Dune for anyone’s other than Lynch. Some of its most striking moments channel the surreal symbolism of Eraserhead or the dream logic of Twin Peaks, and the film is loaded with Lynch regulars like MacLachlan, Stockwell, and Nance. Lynch would quickly move on from the film, going from what many considered one of the worst films of the ‘80s to one of the best in Blue Velvet. 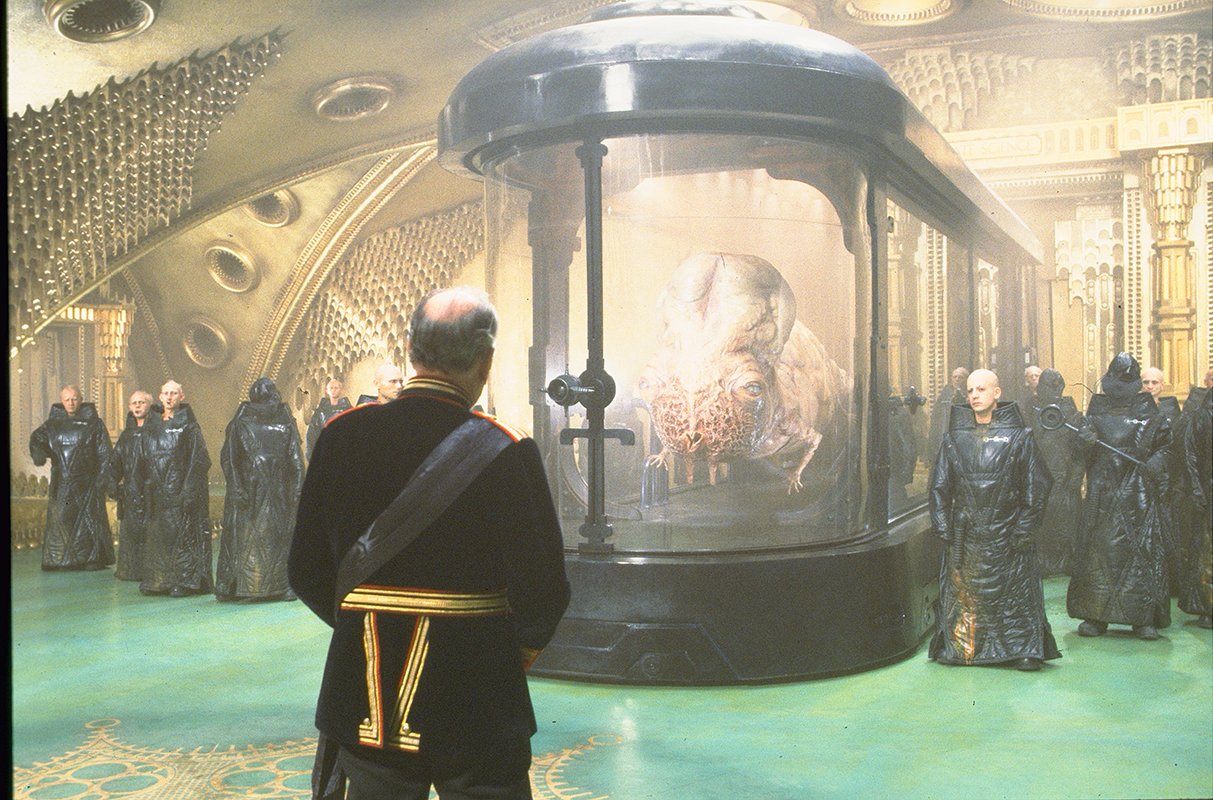 However, critics and fans started to come around to Dune, especially as Lynch’s career took off. As projects like Blue Velvet and Twin Peaks brought Lynch back to critical prominence, new fans would find their way to Dune, and the reputation of the film started to shift. The film’s visual delights play differently to audiences more attuned to sci-fi worlds than they did in the ‘80s, when ticket buyers largely expected another Star Wars action movie when they opened their wallets for Dune. The shift in expectation allows a film like Dune to play differently now to modern David Lynch fans than it did in 1984.

Even critics who admitted that the film is often a mess that’s clearly been impacted by producorial interventions would come to temper their modern negative reviews with praise about the project’s memorable tone and undeniable ambition. And the tech elements of Dune, especially its striking production design and fantastic score, started to dominate the conversation more than its leaden dialogue.

So now it’s time to return to Arrakis again whether it’s in one of the current books, Villeneuve’s blockbuster re-do, or a reappraisal of Lynch’s maligned third film. The visionary director himself may have disowned it, but it feels like there are new fans willing to claim it every single day.

Dune is available from Arrow on UHD and Blu-ray.