I can still recall the hype around Richard Kelly’s debut feature Donnie Darko, (available from Arrow on Limited Edition UHD) a pulsing excitement for this eccentric independent film from an unknown filmmaker, with an unknown lead actor in Jake Gyllenhaal. In hindsight it seems that it was pre-destined to be a future cult classic, but it could easily have been an indie darling that flew too high and too close to the burning sun of critical and audience adoration, only to then be cast aside.

Donnie is a troubled high school student: in therapy, prone to sleepwalking and in possession of an imaginary friend, a six-foot rabbit named Frank, who tells him the world is going to end in 28 days 06 hours 42 minutes and 12 seconds. During that time he will navigate teenage life, narrowly avoid death in the form of a falling jet engine, follow Frank’s maladjusted instructions and try to maintain the space-time continuum.

Why it generated the hype it did and continues to enjoy a cult status today is that for many it’s more than a story, it was an encounter on life’s journey with a character who emotionally touched us. Donnie Darko is not nostalgia, it’s the sentimentality of holding onto the memory of a fond encounter, because characters in films and books can mean just as much to us as ‘real’ people.

The depressed and eccentric Donnie that the characters in the film see, conceals his private emotional and psychological interior. The theatrical and director’s cut offer two different experiences, and mirror this divide between the exterior and the interior, the longer cut representing the storyteller’s deeper and more personal expressive vision. 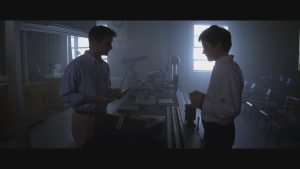 Overdue homework is the least of Donnie’s problems…

Described by its director as, “The Catcher in the Rye (1951) as told by Philip K. Dick”, with its distinct vision, the film constructs a bridge between J.D. Salinger and David Lynch. Back when the film was first released, the Lynchian dreamscapes were still on the horizon for some of us, and so the film for a particular generation was an introduction to, and an adolescent accompaniment to the cinema of David Lynch. The use of adolescent is not to infer that Kelly’s is a lesser film, but whereas Lynch focuses his surreal, dreamlike, puzzle-box stories in the adult world, Kelly centres his on adolescents and coming-of-age.

Salinger’s influence is undeniable with the themes of depression, anxiety over one’s identity, sexuality and sense of purpose and belonging. Ideas and themes allow us to plot the points at which two storytellers intersect, and as much as Donnie Darko and Catcher in the Rye do, Kelly’s film is too distinct to be paraphrased as Lynchian, rather the creative visions of these two filmmakers intersect at specific points. If there is a connection, it emerges through the subversion of picturesque suburbia and the creation of worlds of confusion and surreal spaces.

In the opening scenes, after waking up in the middle of the road that overlooks the hills outside of town, Donnie cycles home. We see the peaceful suburbia, with it’s neatly tended green lawns that echoes the picket white fences in the opening of Lynch’s Blue Velvet (1986).

Each in their own way proceed to subvert the idea of suburbia, and it’s in keeping with the creative voice of their respective storytellers. Kelly hones in on the friction between progressive liberal thought and conservatism, while Lynch finds a seedier and more disturbing tone in the themes of voyeurism, sadomasochism, and abusive relationships.

Patrick Swayze’s self-help guru and motivational speaker Jim Cunningham shares an interesting relationship with Dennis Hopper’s over-the-top theatrical criminal and psychopath Frank Booth – one hides his shadow beneath a mask of civility, the other exercises no restraint. Both men are sexual predators, but the exposure of Jim’s secret is a disturbing twist in the story, one that positions Kelly as being more playful and patient than Lynch was in subverting the idea of civilised suburbia.

Another interesting point of note is Frank’s domestic violence is echoed in Gretchen’s (Jena Malone) story, albeit verbally. We only hear that her mother has been and continues to be a victim of domestic abuse, first with Gretchen’s father, and now her step-father. 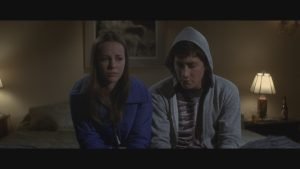 While Lynch aggressively rips apart to subvert, Kelly presents an image of a repressed society through for example, fundamentalist Christian teacher Kitty Farmer’s (Beth Grant) attack on Graham Greene’s short story. The frustrations of Donnie’s science and English teachers, restrained from teaching and conversing with students on progressive topics also feed into this feeling. Meanwhile, Donnie’s incisively honest rants position him as one of the few confronting the existential crisis that’s repressed by the majority, the anxiety and fear underpinning the picturesque suburbia.

Lynch creates worlds of confusion and surreal spaces that intrudes up on the perceived reality of his characters. Donnie’s interactions with the giant rabbit named Frank, who gives him instructions in the run up to the world ending, are what his therapist calls, “daylight hallucinations.” These are reminiscent of “The Red Room” in Twin Peaks (1990-91), a reimagining of Agent Dale Cooper’s dream-space. The spaces of “Club Silencio” in Mulholland Drive (2001) seem to connect the film to Twin Peaks. Whereas Lynch’s cinema can become expansive, Kelly instead sustains an intimacy, using a singular character as the core for this creation of worlds of confusion and surreal spaces.

If Kelly is more philosophical, trying to find order in the chaos, then Lynch is more interested in losing himself and us in the chaos. The two filmmakers are wary of answers, each perceiving that the energy of life is emotional and psychological confusion, and hence it’s the engine of storytelling. If there is a Lynchian connection, then it should be contextualised as Kelly indirectly bridging Salinger and Lynch, taking the inspiration of one and placing himself in the realm of the other.

Paul Risker is a European (not British or English) based film critic, interviewer and editor, whose work has been published by PopMatters, Cineaste, the Quarterly Review of Film & Video, PopMatters, LWLies, FrightFest and VideoScope. He's on the advisory board of Mise-en-scène: The Journal of Film & Visual Narration (MSJ), and serves as interview editor.

Ten Circles of Hell: Raising the best of Clive…