After launching his directorial career with the blockbuster success of his astonishing Animal Trilogy – The Bird with the Crystal Plumage (1970), Four Flies on Grey Velvet (1971) and The Cat O’ Nine Tails (1971) – Dario Argento was faced with an important question: what next?

Staying in the realm of baroque, horror-heavy giallo cinema that had marked his earlier work, while Argento didn’t invent giallo as such (we need to go back at least to Mario Bava’s The Girl Who Knew Too Much in 1963 for that), there is little argument that Argento reinvigorated it and made it the enduring international cult film phenomena it remains today.

What next was Deep Red (now available on 4K UHD). If the Animal Trilogy was a success, then Deep Red was about to change the face of giallo – and, indeed, horror cinema itself – forever. To mark the lush, jam-packed new release of one of Dario Argento’s most beloved films, we go back to basics and revisit the film, all the way from A to Z.

A is for Alcohol

Carlo (Gabriele Lavia) is a drunk, and one of the film’s central locations is the Blue Bar. Gianna (Daria Nicolodi) keeps a virtual mini bar in her tiny, vaguely functional car. And most importantly, there’s an iconic bottle of J&B (a giallo staple) in Carlo’s apartment that we briefly see when Marcus (David Hemmings) visits him.

B is for Battle of the Sexes

Marcus insists men are the stronger sex and that women are inferior and weaker. When she stops laughing, Gianna spends much of the rest of the film proving him wrong, beginning with an arm-wrestling competition where she unhesitatingly kicks his arse.

C is for Clara Calamai

The star of Luchino Visconti’s Ossessione (1943), by the time Clara Calamai played Carlo’s mother Marta she was a grande dame of Italian thrillers cinema. Eyeball the framed photos of her when she was younger we see briefly in the film; Argento’s love letter to a legend in one of her final film performances. 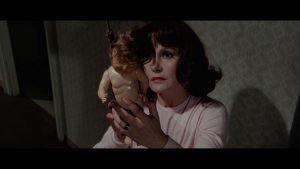 D is for Dolls

Nothing electrifies a horror film like a creepy doll. We see a small plastic one early in the film as the camera pans across an abstract array of seemingly random objects from the killer’s perspective, and later another doll is found hanging from the ceiling of one of the killer’s increasing number of unfortunate victims.

E is for Engineer

Why does Marta insist that Marcus is an engineer and not a piano player? This cute indicator of Marta’s broader befuddlement provides not just one of the film’s many moments of genuinely funny comedy, but as Alexia Kannas points out in her 2017 book on the film for the Cultographies series, the line is also lovingly referenced in another Italian cult horror masterpiece, Michele Soavi’s Cemetery Man (1994).

F is for Franco Fraticelli

Editor and frequent Argento collaborator Franco Fraticelli grants Deep Red some of its most dynamic energy across its many heart-thumping murder vignettes in particular. Beginning with Argento’s debut The Bird with the Crystal Plumage (1970), Fraticelli would collaborate with Argento right through until the 1987 giallo Opera.

G is for Goblin

Deep Red is virtually synonymous with Goblin’s famously creepy lullaby, but it almost didn’t happen. Soundtrack duties were originally granted to jazz musician Giorgio Gaslini, but Argento was not a fan of the finished product and so turned to the prog-rock band with whom he would work with again in the future, most famously on the soundtrack for Suspiria (1977).

H is for the House of the Screaming Child

The folkloric heart of the film is the story of a hunter who once awoke to a child’s voice singing that soon turns into screams and weeping, from this story through to the secret behind the murders that littler Deep Red, the figure of the traumatised child is a central motif.

I is for Immersion

J is for Jazz

Marcus is a jazz musician – a pianist – and one of the very rare times we ever see Carlo genuinely happy is when the two men sit side by side at the Blue Bar together, playing music.

K is for Luigi Kuveiller

Having worked many years previously as a camera operator on Michelangelo Antonioni’s L’Avventura (1960), as cinematographer Kuveiller would shoot Deep Red which was Argento’s reimagining of Antonioni’s 1966 arthouse classic Blowup, also starring David Hemmings. His other giallo credits include Lucio Fulci’s A Lizard in a Woman’s Skin (1971) and Elio Petri’s A Quiet Place in the Country (1968).

L is for Library Theft

Deep Red documents in lurid detail a number of shocking, vicious and inexplicable crimes, amongst them the often-overlooked atrocity of Marcus stealing a page from a library book. Not quite murder, but a terrible crime against humanity. Respect your local library please. 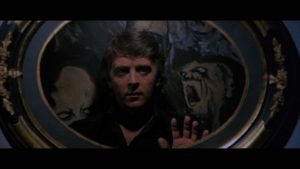 David Hemmings keeps an eye on his coiffure

M is for Mullet:
Or is it? Marcus’s hair here is worth noting regardless. Obviously, it is not a full-fledged irony-mullet, but there is undeniably a gentle, curvaceous outgrowth at the base of David Hemmings’s hairline that leans further into mullety areas due to his lovely, buoyant naturally curly hair.

N is for Nighthawks

Set downstairs from the killer’s first victim Helga Ulmann’s (Macha Méril) apartment, The Blue Bar is a regular location in the film with one shot in particular inspired by Edward Hopper’s famous Nighthawks painting from 1942.

O is for Olga

From Mario Bava’s A Bay of Blood (1971) to Lamberto Bava’s Demons (1985), Italian horror child star Nicoletta Elmi dazzles with a perverse glee as the sadistic young Olga in Deep Red. It’s a great film for creepy kids, Jacopo Mariani’s brief but memorable performance as the young Carlo is one of the film’s most striking images.

P is for Puppet

The deployment of a seemingly sentient killer ventriloquist dummy-looking puppet in the assistance of one of the killer’s increasingly ornate murders makes very little sense, but when it looks that good who cares, right?

Q is for Queer

Whether a killer queer or a tragic gay man, the many ways we are encouraged to interpret Carlo’s character almost pales in comparison to the brief moment we see into his private life and meet his gentle, caring lover, another queer man played by a woman, actor Geraldine Hooper.

R is for Re-Enactment

Colleague and friend of the first murder victim, Professor Giordani (Glauco Mauri) assists amateur sleuth Marcus in his investigations into the murders and together they return to the theater where the original crime took place to re-enact the crime as Marcus and Gianna attempt to discover new clues.

S is for Switchblade

Not all giallo movies have switchblades, but as one of the filone’s most famous iconographic elements, the switchblade makes a memorable appearance here. And for the purists amongst you, don’t worry – the black leather gloves so synonymous with giallo also feature heavily. 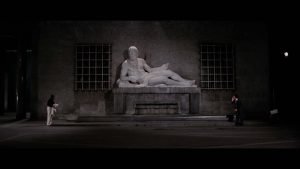 T is for Turin

From the Il Po statue in Piazza C.L.N. where Marcus and Carlo have their poignant one-on-one conversation to the beautiful Carignano Theater built in the late 16th century where the memorable early scene of psychic skills is displayed, the northern Italian city of Turin is very much front and centre of Deep Red.

U is for Helga Ulmann

Played by elegant French actor Macha Méril – aka Princess Maria-Magdalena Vladimirovna Gagarina (no kidding) – while she worked with directors such as Rainer Werner Fassbinder, Jean-Luc Godard and Luis Buñuel, it is as the unfortunate psychic Helga Ulmann whose murder spectacularly opens Deep Red that remains arguably her most famous and iconic role.

V is for Villa Scott

Turin more broadly may be a large part of Deep Red’s magic, but it is surely the beautiful yet haunting liberty style mansion Villa Scott which remains its most memorable location. This abandoned, enormous house with its hypnotising architecture contains the dark secrets that lie at the film’s heart.

W is for Witnessing

When we see something, do we fully perceive and process that information, or can our memory play tricks on us? Like Antonioni’s Blowup before it, this question lies at the centre of Deep Red. What did Marcus see that he can’t quite remember?

X is for Xerosis

Think there’s nothing more annoying than a bit of dry skin or xerosis? Try being a desiccated corpse discovered in the unfolding investigation that propels Deep Red and then you’ll find out what real problems are.

Y is for Yellow

The English word for “giallo”, the latter is a literary form that evolved into a category of Italian often sexy horror-thriller film hybrids which peaked during the 1970s. Dario Argento was a master of the form, and Deep Red remains for many his magnum opus.

Z is for Zax

OK, it’s technically not a zax – a specific kind of axe used in roofing to remove tiles – but on the weapons front, axes play a key role, so much so that Deep Red was also released under the alternative English language title The Hatchet Murders.