It’s probably safe to say that nineteenth century author, poet and literary critic Edgar Allan Poe is one of (if not the) most influential American writers to have worked in the horror and science fiction genres. Certainly his influence on genre cinema – post-World War Two cinema in particular – has remained unmatched, even to this day. Poe’s work was one of cold, brutal disconnection – romantic, yet desolate: little wonder then that it resonated so strongly with its disillusioned post-war audience. But as times change, cinema trends move to change with it, especially in these trying days of social distancing and isolation where Poe’s work – his themes of loneliness and sanity, in particular – has become frighteningly relevant once more. Patrick Picard’s The Bloodhound, the latest motion picture adaptation of Poe’s celebrated fictional oeuvre, plays up those cloying feelings of solitude and desperation, stripping Poe’s work to its barest essentials.

Since the birth of cinema in the later nineteenth century, the short stories, novels and poems of Edgar Allan Poe have been translated to the medium of the motion picture a staggering 400 times, not bad for a writer who’s entire career spanned just 25 years and who died at the young age of 40. Yet, it could be argued, the first truly successful translation of Poe’s work to the cinema screen was in the early 1930s with Murders in the Rue Morgue [1932], the first of Universal Picture’s terror trilogy based on the writer’s stories and poems. Released in the wake of the phenomenal success of seminal horror flicks Dracula and Frankenstein (both 1931 and both key in shaping the horror genre for the next 30 years), producer Carl Laemmle Jr was looking for further macabre tales that he could bring to the silver screen, when director Robert Florey brought Poe’s 1841 short story to his attention.

The film made enough of an impact at the box office to please Laemmle and two more films followed in quick succession – The Black Cat [1934] and The Raven [1935]. Although all three films had only a tenuous link with the original stories on which they were based (The Raven not actually being based on one of his works at all) and displayed very little of Poe’s desolate romanticism, with much of the writer’s themes and musings ejected in favour of the stark horror of the mutilated “outsider” (something that had also been on display in Dracula and Frankenstein) a theme that was familiar to the horror genre at that time, influenced by German cinema in the years that immediately followed the First World War.

By the start of the 1920s, post-war Germany had been in the grip of a moralistic nervous breakdown, with the German people finding themselves increasingly isolated by a bitter and resentful world. Around this time German cinema saw the establishment of a new creative movement known as German Expressionism, a dark and often disturbing style of cinema that had sprung from the country’s horrifying experiences during four years of bloody conflict. A great many of these films dealt with themes of physical disfigurement and forced facial mutilation. Many of the characters from these films were physically grotesque and monstrous, purposefully redolent of the images people were now seeing within the pages of their daily German newspapers: wounded soldiers placed into hospitals and sanatoriums, invalided out of the war due to the sheer severity of their injuries.

Laemmle knew all too well of the scenes the German people faced as the soldiers came home in 1918. Born Karl Lämmle to a Jewish family in Laupheim, Württemberg in the German Confederation, Laemmle had made it his mission to move away from the troubled area as soon as he was able, but both family connections and his Jewish roots insured a continued interest in its politics and the uneasy relationship it had with nearby Germany. It was no coincidence that those films under Laemmle’s purview were imbued with the uncomfortable examinations of the dark, unconscionable deeds of the human soul. 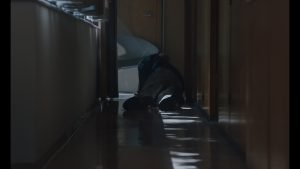 Perhaps the finest example of this deep-rooted paranoia can be found in the six Poe adaptations produced by Roger Corman for American International Pictures. Between 1960 and 1964 Corman made an impressive six movies based on the horror author’s work: The Fall of the House of Usher (1960), The Pit and the Pendulum (1961), The Premature Burial (1962), Tales of Terror (1962), The Masque of the Red Death (1964) and The Tomb of Ligeia (1964) (he actually directed two others during that period, The Raven [1963] and The Haunted Palace[1963], but these only used Poe’s stories as a starting point, they weren’t true adaptations). Unlike those produced by Universal, Corman’s films offer their own wildly different interpretation of Poe – this time taking the term ‘romanticism’ quite literally. Adorned liberally with lashings of Gothic trappings, Corman’s films featured dark, wild stormy nights, crumbling stone mansions haunted by the spirits of the crazy and the disposed, vulnerable maidens ripe for rescuing, ancient curses that have blighted a family’s dynasty for centuries, reeking dank dungeons and, of course, the obligatory gruesome bloody torture scene.

Standing in contrast to these previous adaptations is The Bloodhound. Where as Poe’s written work was predominantly interested in the rooms of the mind (particularly those deep unfathomable areas that controlled the longings and desires of the human heart) Picard’s film, which is based on the short story The Fall of the House of Usher, deals with literal rooms – in this case, those within J.P’s beautifully unique home – and the secrets that crouch behind their closed doors. Indeed, doors play a significant part in the film’s visual style, as we cut back again and again, to the closed closet door behind which J.P’s mythical ‘Bloodhound’ has taken refuge, or the door behind which the reclusive Vivian struggles with her sanity. Many of the doors are closed, sealed off, locking away the secrets of J.P and his sister’s past they are too terrified to face.

It is a film that wrestles with the nature of isolation, of trapping ourselves behind doors and removing ourselves from the harm that a wider world may (unintentionally) inflict on us – something that is very relevant as I write these words. It is about having to face the basic nature of our true selves, and the mental scars such an act may invariably leave us with. In a society where we rarely leave our own homes, with the country seemingly forever placed in lockdown, the condition of J.P might very well be that of our own, as he tells his childhood friend Francis as they stand together on the balcony after reconnecting for the first time in 10 years, “You’ve got to promise not to judge me too harshly when I tell you this, but I haven’t stepped foot outside this place in 2 years.” When Francis voices his incredulity, J.P qualifies this with “It’s a nasty world!” For us too it is a nasty world (right now, at least) and like J.P the only thing we can do is to lock ourselves away behind closed doors and hope for the best.

The Bloodhound is a film that can be every bit as uncomfortable for the viewer as it is for the characters themselves and is one that, at times, can be a little too on the nose for our liking. Although there is very little one could call ‘romantic’ about it, this is a film that starkly and honestly wrestles with those themes inherent in Poe’s work and also in the time we currently live in, tackling difficult issues that people all over the world are facing as you read this: loneliness, isolation, mental health, friendship, the loss of family and the loss of ourselves, our identity and our purpose.